Emperors and the Divine – Rome and its Influence, ed. Maijastina Kahlos, COLLeGIUM, Studies across Disciplines in the Humanities and Social Sciences 20, Helsinki Collegium for Advanced Studies: Helsinki, 2016.

Contributions from the CoE members: Maijastina Kahlos and Outi Lehtipuu. 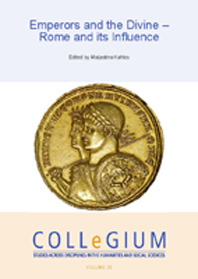 In the course of history, the divine sphere has often been harnessed to serve the needs of political leaders. Political power has frequently been legitimized as authorized by the divine forces. The articles of this volume analyse the relationship of the Roman emperors to the divine – their support of different divinities, their role as the mediators between the divine and humankind, and their religious policies. Emperors and the Divine brings together scholars from different disciplines, history, classics, comparative literature, archaeology, comparative religion, Biblical studies, church history and Roman law.

This is an open Access Publication, in the series COLLeGIUM, Studies across Disciplines in the Humanities and Social Sciences 20, and can be read here.

Emperors and Their Divine Honours
William van Andringa: Rhetoric and Divine Honours: On the “Imperial Cult” in the Reigns of Augustus and Constantine
Janneke de Jong: Emperor Meets Gods: Divine Discourse in Greek Papyri from Roman Egypt
Mika Kajava: Gods and Emperors at Aigeai in Cicilia 56

Emperors – Legitimation and Criticism
Jussi Rantala: Gods of Cultivation and Food Supply in the Imperial Iconography of Septimius Severus
Tobias Georges: Tertullian’s Criticism of the Emperors’ Cult in the Apologeticum

Emperors and Christians – Identity Formation
Outi Lehtipuu: “What Harm Is There for You to Say Caesar Is Lord?” Emperors and the Imperial Cult in Early Christian Stories of Martyrdom
Maijastina Kahlos: The Emperor’s New Images – How to Honour the Emperor in the Christian Empire?