Tervahauta, Ulla. A Story of the Soul’s Journey in the Nag Hammadi Library. A Study of Authentikos Logos (NHC VI,3), Vandenhoeck & Ruprecht 2015. 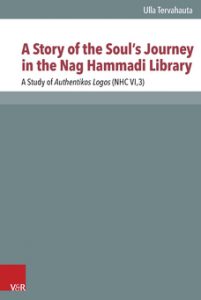 Authentikos Logos (NHC VI,3), also known as Authoritative Teaching,is a little studied story of a soul’s descent and ascent in the Nag Hammadi library. With her book Ulla Tervahauta fills a gap in the scholarship and provide the first monograph-length study that has this writingas its primary focus.

The aim is to find a place and context for Authentikos Logos within early Christianity, but Tervahauta also adds new insight into the scholarship of the Nag Hammadi Library and study of early Christianity. Contrary to the usual discussion of the Nag Hammadi writings from the viewpoint of Gnostic studies, she argues that Authentikos Logos is best approached from the context of Christian traditions of late ancient Egypt between the third and the fifth centuries.

Tervahauta discusses the story of the soul’s journey in light of various Christian and Platonic writings. Also, she analyses the relationship of Authentikos Logos with the Valentinian Wisdom myth and suggests that no firm evidence connects the writing closely with Valentinian traditions. And although a Platonic mind-set can be assumed, the writing combines motifs in a unique manner. For example, the four epithets used in the writing – the “invisible soul”, the “pneumatic soul”, the “material soul”, and the “rational soul” – are not found thus combined elsewhere. Discussion of matter (hyle) is connected with Christian scriptural allusions and the focus is on ethics and the evilness of matter. The body, on the other hand, is the soul’s place of contest and progress. The Pauline term “pneumatic body” (1 Cor 15:44) is used allusively and from a Platonic perspective.