The American Academy of Religion (AAR) with the Society of Biblical Literature (SBL) co-host annual meetings, which are the largest events of the year in the fields of religious studies and theology. Some 9,500 people attended the 2016 Annual Meetings held in San Antonio, Texas, USA, in November 22–25. These events brought together thousands of professors and students, authors and publishers, religious leaders and interested laypersons from the Unites States and all over the world.

In recent years, these two events have been among the main forums for presenting and communicating the ideas and research carried out in our Centre of Excellence. In San Antonio, a group of our researchers had an opportunity to enjoy access to more than 1000 academic sessions and additional meetings, and to present their research in several formal and informal occasions. Elina Hellqvist, Minna Hietamäki, Panu Pihkala, and Anna-Liisa Tolonen gave their individual papers. 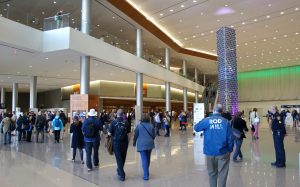 The conference was a treasure cave for scholars of religion and environment. This interdisciplinary field, which has grown rapidly in the 2000’s, consists of scholars from various countries. A new member of our CoE, Panu Pihkala (Dr.theol., postdoctoral Researcher, scholar in ecotheology) attended and gave papers both at AAR and SBL in this year San Antonio meeting.

Pihkala reports that key topics included Laudato Si, ecological hermeneutics, eco-reformation, and climate change.  Laudato Si (LS), the influential encyclical by Pope Francis (2015), has raised discussion on ecotheology on many fields. In the conference there was more papers which dealt with LS than one could possibly attend to, among these high-quality session on Pauline texts and Ecological Hermeneutics. The session included also a qualified overview by Michael Patrick Barber of recent papal teaching on ecotheology, with special emphasis on the use of Paul’s theology in that.

If LS has generated movement towards richer ecotheological reflection especially in the Roman Catholic world, many Lutherans are pushing towards a similar goal with an emphasis on the need of an “eco-reformation”. In 2017, the 500th anniversary of reformation will be celebrated.  The proponents of eco-reformation see that a major need in today’s world is reforming the human-nature-relationship to more sustainable ways. The campaign has been spearheaded by North American Lutherans (and supported by the Lutheran World Federation). Two fine new books related to the subject were on sale at the conference: the straight-out-of-the print Eco-Reformation (edited by Dahill and Martin-Schramm) and Transforming Luther: The Planetary Promise of Luther’s Theology by Vítor Westhelle (2016).  Panu Pihkala’s own AAR presentation was linked with the eco-reformation and Lutheran eco-justice theologies, and his SBL presentation dealt with use of the Bible by early 20th-century ecotheologians. For more information, see blog by Panu Pihkala.

Anna-Liisa Tolonen, a doctoral student of our CoE working in the field of biblical studies, was invited to give a paper in a session organized by Christine Helmer (Northwestern University). The session was titled “From Biblical Theology to Biblical Reception” and aimed to address the variety and vistas of the emergent and growing field of reception historical study of the Bible, as well as its impacts on the study of the Bible and biblical theology at large. Each of the five invited speakers presented case studies, providing different disciplinary perspectives into reception-historical analysis, such as those of biblical studies (Christian Eberhart, University of Houston; Marvin A. Sweeney, Claremont School of Theology; and Tolonen), study of early modern folklore (Eric Ziolkowski, Lafayette College), and of film (Rhonda Burnette-Bletsch, Eastern University).

The panel reflected on questions related to methods of the reception history of the Bible – a field taking shape at the intersection of biblical, religious, theological, cultural, and artistic concerns – and successfully represented the growing interest in the field, as well as the lively on-going debates on the appearances and authority of the Bible. The papers shall be worked into articles to be published in an edited volume in De Gruyter’s ERB monograph series.

Anna-Liisa Tolonen’s paper, “What is ‘biblical’ and what is ‘reception’?,” was based on the approach to biblical reception she develops as part of her doctoral dissertation. Its main purpose was to challenge the notion of ‘biblical’, which, as she proposed, is still too often used somewhat carelessly in contexts in which the notion of ‘reception’ is reflected upon with theoretical critical awareness. She argued that:

“The Bible is not the origin, cause, or subject of its reception; rather, receptions produce, maintain and cultivate what is considered to be authentically biblical. I therefore imagine biblical reception as comprised of the various and diverse, at times contradictory, cumulative and on-going makings-of-sense-and-use-of-scriptures; all this could be called the discursive practices that objectify the “biblical.”  This is true of the “early” receptions, including the codifications and canonizations of certain collections, which count as practices informed by the emergent notion of scriptural canon(s). But it should be no less true of the later and the much later receptions, in which we standardly presume a dichotomy of the Bible-as-subject, on the one hand, and its interpreters, on the other. As regards the present, contemporary receptions – not excluding ours – shape future conceptualizations of what counts as the “biblical” in the past, and what can be claimed “biblical” in the future.”

In her conclusions, Tolonen sketched out a more inclusive notion of reception, which could lead not only to a more flexible but also to a historically more accurate notion of the biblical. This notion, she envisioned, could better serve our contemporary historical consciousness of the shared past and the intertwined history of Jews, Christians, and Muslims. 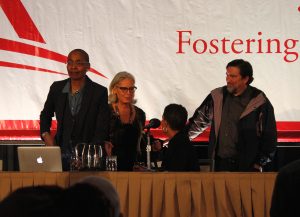 This year the current political and societal issues were strongly manifest in numerous panels and sessions. The recent presidential election of US was much debated theme in both informal gatherings as well as in organized sessions. For instance, in one of the plenary panels, ‘Love and Hate in American Religion’, explored manifestations of “the hatreds of our day,” their origins, their relation to religious thought and practice, and varied strategies available to disrupt their power. Such theologians as Cornell West and Eddie S. Glaude draw out the connections between hatred directed towards Latinos, African Americans, and Muslims. The following lively discussion included several allusions to president-elect Donald Trump and his campaign’s statements and showed clear worry about the rise of the idea of white supremacy.

These same themes reappeared in several panels. In ‘Post-Trump Election’ session participants asked what is their role as scholars of religion in this context and does this context place new demands on their work. One of the prominent black theologians, professor of religion, rev. Kelly Douglas Brown presided two sessions; on black theology and civil rights, with the special interest on current changed political milieu. Drawing on her experiences during the election cycle she pointed out that the role of religion and race played a major influence in the election and warned that the political season will be polarizing and divisive.

AAR also hosted Templeton Prize lecture with Rabbi Lord Jonathan Sacks ‘Faith in the Future: The Promise and Perils of Religion in the 21st Century. Rabbi Sacks is the former Chief Rabbi of the United Hebrew Congregations of the Commonwealth and laureate of the 2016 Templeton Prize. He is known for his pleas for appreciation and respect of all faiths, with an emphasis that recognizing the values of each is the only path to effectively combat the global rise of violence and terrorism. Sacks is also known for his defendence of compatibility of religion and science, a response to those who consider them necessarily separate and distinct. In his lecture, Sacks gave an overview of his idea of the fourfold process of secularization, which begun with the secularization of knowledge during the 17th century, was followed by the secularization of institutions and culture and has culminated in the secularization of morals in the 20th century. He then reminded the audience that modernity’s master institutions, science, technology, the market economy and the liberal democratic state, all of them together cannot answer the three questions that any reflective person will ask him or herself some time in the course of a lifetime. Who am I? Why am I here? How then shall I live? Who am I, the question of identity. Why am I here, the question of meaning. And how then shall I live, the question of morality. The lecture ended by Sacks emphasis on education and the role of academy or the idea of university. Universities should remain as central institutions of modern societies; places where “argument and disagreement can be hard harnessed to the collaborative pursuit of truth.”