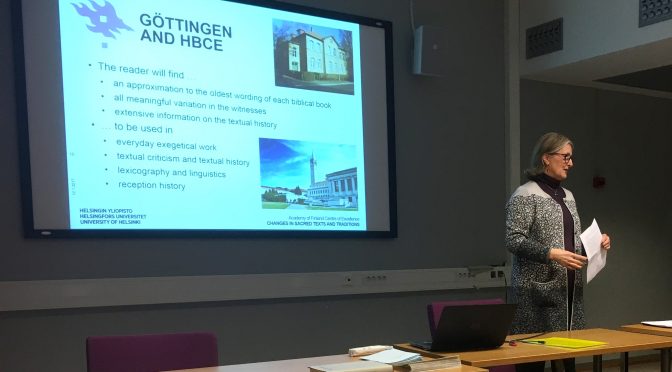 1. What is your research about, in general terms?
My special area of research is the Septuagint, the ancient Greek translation of the Hebrew Bible, translated by Jews during the 3rd–1st centuries BCE in Alexandria. I am preparing the first critical edition of the Septuagint text of the First Book of Samuel (= First Kingdoms) for the series of the Academy of Sciences in Göttingen. However, this work cannot be done without all the time having an eye on the text of the Hebrew Bible, as I need to reconstruct the kind of Hebrew text that was used by the translator and to survey the translation technique and the competence of the translator. Practically, I am doing textual criticism of the Greek and the Hebrew text of 1 Samuel at the same time. But this is the only way to proceed with the critical edition. 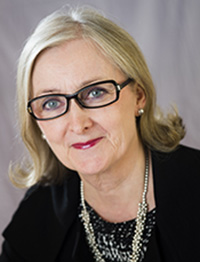 2. Why particularly did you choose this direction for your career?
I was fortunate to be able to work already as a student in the research project of Professor Ilmari Soisalon-Soininen. He was the first one to do Septuagint research in Finland. He was interested in the syntax of the Greek language used by the translators, and his innovative methodological approach to this area of study was to do it from the angle of translation technique. My first area of study was the Greek translation of clauses introduced by certain Hebrew conjunctions (ו and כי) in the Septuagint. This was a very good introduction into philological work on the Septuagint. When I started as professor in Göttingen (1991), I broadened my scope to different areas of Septuagint research, and was then assigned to prepare the critical edition of 1 Samuel.

3. How would you describe the relevance of your work for society?
It is difficult to demonstrate the direct relevance of this kind of basic research for society. However, it participates—as a fundamental part of Biblical studies—in the task of educating people in matters concerning the Bible, i.e., its origins and contents, as well as a responsible way of reading it. Ultimately, it is a question of resisting fundamentalism and helping to discover the real values represented in the Bible.

4. Looking back at your years as a professor, what would you say you are most proud of?
I am proud of my students. I am happy that I have been able to pass on some of the know-how that I have received and learned myself. Project funding from the Academy of Finland has helped a great deal in this respect. I am also very proud of our Centre of Excellence, the excellent research produced in it, and the atmosphere of exchange and cooperation that we have among us.

5. Can you tell us a short story about something that happened to you during your career that amazed you?
When I started working on 1 Samuel, I did not expect to find what I found: so many deliberate changes in the Hebrew text and so many corrections according to the Hebrew text in the Greek, especially in Codex Vaticanus. It has amazed me that students who have been studying the texts with me have often been ready to see the changes in the text when I was still hesitating myself. On the other hand, it amazes me how slow the reception of new results and ideas is among the international scholarly community. At a conference in Madrid 2014, when I had been giving papers about my discoveries in the Septuagint text of 1 Samuel for already ten years, my colleagues, who had heard me speak several times about the same discoveries, asked me whether I really meant what I said. It had taken them ten years to understand what I said – not to speak of approving or discussing my discoveries with me.

6. Is there anything you’ve researched that you never thought you’d find yourself interested in?
Paleography is a new area for me that I needed to enter, because the only way to get hold of a newly discovered fragmentary Greek papyrus of 1 Samuel was to gather a group of young scholars and students to prepare the publication of this manuscript. It has been great fun to work with the group, and the publication of the papyrus is approaching completion. It is a remarkable papyrus, and I dare say, the publication will be worthy of it.

7. What are you working on at the moment?
I will be concentrating on the critical edition of the Septuagint of 1 Samuel as long as it takes to finish it. This long-term project will also produce a few other publications on the Hebrew as well as the Greek text of 1 Samuel. I will also continue as the vice-director of the Centre of Excellence “Changes in Sacred Texts and Traditions.”

8. Is there anything you look forward to leaving behind when you retire?
I look forward to finally being able to do what I should have been doing all the time as a professor, namely, research. It is really tragic that the life of an academic is today so hectic: so many things to do and so many deadlines, papers all over the world and preparing all of them for publication, meetings and administration, teaching and exams, etc. Although I have loved working with the students – and I will continue working with my doctoral students – I am happy to be able to leave behind the hectic and concentrate on the research projects that need to be finished.

2 thoughts on “Reflecting on a Career Studying the Septuagint: An Interview With Anneli Aejmelaeus”