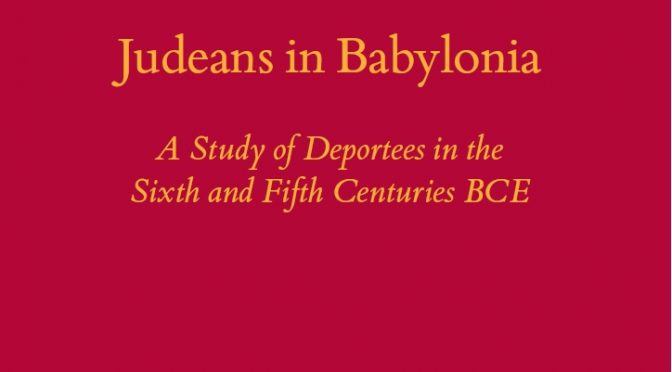 The ancient Near East provides us with very early textual evidence of human migration. In his new book Judeans in Babylonia, Tero Alstola studies Judean deportees in Babylonia in the sixth and fifth centuries BCE. Using cuneiform texts as his sources, he explores the life deportees and their descendants in Babylonia over several generations, focusing on the questions of socioeconomic status, culture, and integration into Babylonian society.

One of the most famous instances of forced migration is King Nebuchadnezzar II’s deportations from the kingdom of Judah to Babylonia in the early sixth century BCE. The deportations and destruction of Jerusalem started a period commonly known as the Babylonian exile, which was in many ways crucial to the development of Judaism. The catastrophe required an explanation and started a process of theological interpretation which is reflected in many parts of the Hebrew Bible. 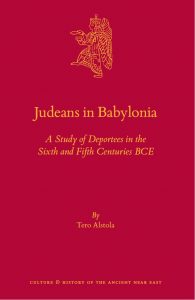 Very little has been known about life in exile because the Hebrew Bible focuses on its causes and consequences instead of Judean life in Babylonia. However, cuneiform tablets from Babylonia are a rich source for the study of economic and social history of the area in the sixth and fifth centuries BCE. Texts from Babylonia do not only pertain to the everyday life of the native population but also to Judeans and other people of foreign origin. Although quite some relevant texts have been available for a long time, the recent publication of cuneiform tablets from the village of Yahudu has significantly increased the number of Babylonian sources pertaining to Judeans.

Judeans in Babylonia (Leiden: Brill, 2020) shows that the life of deportees 2,500 years ago can be studied in great detail. The majority of Judeans and other deportees were settled in the Babylonian countryside and given a plot of royal land to cultivate. In exchange, they had to pay taxes and perform work and military service. These people often lived in villages which were named after their geographic origin, the village of Yahudu – or “Judah” – being a prime example of this phenomenon. Some deportees found ways to benefit from the structures of local agriculture, and socioeconomic differences emerged over time. A number of Judeans were also settled in cities where they often worked as skilled professionals such as craftsmen, merchants, or officials. The state administration was open for people of foreign origin, partially because of the widespread use of Aramaic as a spoken and written language.

Deportees were not enslaved, and they could own property, engage in business activities, and travel at least locally. The practice of settling deportees in village communities according to their place of origin helped migrants to preserve their traditional culture in the countryside. Judean farmers had little interaction with the native population whereas the deportees living in cities met Babylonians on a regular basis. As a result, Judean farmers were less integrated into Babylonian society than their fellow deportees living in cities.

Reference: Alstola, Tero. 2020. Judeans in Babylonia: A Study of Deportees in the Sixth and Fifth Centuries BCE. Culture and History of the Ancient Near East 109. Leiden: Brill.