The youth are enjoying secondary education

In the late spring of 2016 we reached 306 of our Transit youth. According to the follow-up survey, the youth were generally satisfied with their current schools. The youth’s school appreciation had increased since the 9th grade, whereas experiences of bullying and discrimination had diminished. 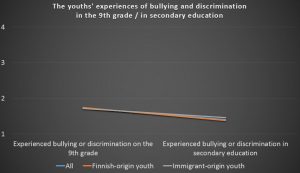 The youth appreciated the independence and the freedom of choice in their current studies, and enjoyed being able to concentrate on their personal interests. Meanwhile, friends and the social sphere of school were considered important as well. 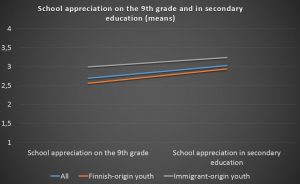 On the right track?

Roughly two thirds of the Transit youth continued their studies in general upper secondary education, while a third continued in vocational education. About five percent of the youth were either attending preparatory vocational training or the 10th grade, continuing their unfinished comprehensive education, taking part in workshop activities or staying abroad.

Nearly ten percent of the youth had considered discontinuing their studies, in consequence of e.g. the heavy workload and the exhaustion inflicted by it. Ten percent were also considering changing tracks from either one vocational school to another, or from general upper secondary education to vocational education.

Only a few of the youth were outside all education. They had looked for information about different options from student counselors, the youth counseling services provided by the city and the employment agency. Only a couple of these youth were not planning to reapply in any education.