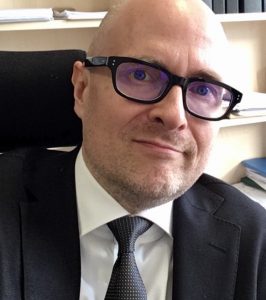 Björn Ahl is Professor and Chair of Chinese Legal Culture at the University of Cologne. He currently holds the position of President of the European China Law Studies Association. The Finnish China Law Center had the pleasure to conduct an interview with him on his personal experience and recommendations for students and young professionals in researching Chinese law.

Professor Ahl began with his law studies at the University of Heidelberg in the 1990s and spent one year at the Law School of Nanjing University as an exchange student to improve his Chinese and take classes in Chinese law. According to him, foreign students in Chinese law schools were very rare at that time. ‘It was quite an open atmosphere among students, and we had fascinating discussions about Chinese and international law issues’, he reminisced. After finishing his law studies in Germany, he worked for some time at the Max Planck Institute for Comparative Public Law and International Law in Heidelberg, and then went back to Nanjing University to become the Associate Director of the Sino German Institute of Legal Studies. The interactions with Chinese colleagues and students during these times and being able to witness Chinese law’s rapid development had profoundly shaped his interests at this early stage of his career.

During his teaching and research in Cologne, Professor Ahl has contextualized Chinese law by applying a concept of legal culture in order to tackle the challenges of studying Chinese law from an external and comparative perspective. He observed that while the context of law is regularly omitted in doctrinal legal research that takes an internal, participant-oriented approach to its object of study, external factors are more relevant for the understanding of foreign law if the people who study such law do not share the same preconceptions and preconceived attitudes as those who create and apply the law. Therefore, an approach to the research of Chinese law that is specifically sensitive to the historical, political, economic and institutional conditions of the creation, application and enforcement of law appears most suitable to avoid misconceptions and misrepresentations about the meaning and operation of Chinese law.

When being asked about the methodologies for conducting research in the field of Chinese law from the perspective of a foreign researcher, he pointed out that the answer to this question depends on the research question that the researcher wishes to pursue. However, if one likes to investigate a doctrinal question, he suggested that the researcher should not entirely omit context factors, in particular, if he or she takes a comparative approach. Otherwise, the researcher may end up with false or misleading results. He contended that this applies to the study of any foreign jurisdiction and does not pertain exclusively to Chinese law.

The Centre hereby takes the chance to express our gratitude to Professor Ahl for taking the time to participate in our Featured Researchers interview series.