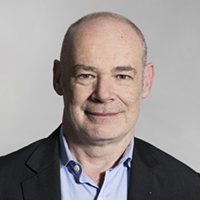 Hailing from the UK, Professor Duncan McCargo has spent extended periods of time across South East Asia and has produced remarkable work in the fields of political science and justice especially with regards to Thailand. He currently holds the position of Director of the Nordic Institute of Asian Studies, whilst continuing to teach and research as a professor of political science at the University of Copenhagen. The Finnish China Law Centre had the pleasure to welcome Professor McCargo to the University of Helsinki in October 2019 when he came to deliver a guest lecture at the Confucius Institute on recent trends in Asian politics. The Centre is privileged to conduct a more in-depth interview with him, focusing on his intellectual journey and views on researching South-East Asian politics as well as its challenges and opportunities.

Professor McCargo’s unorthodox exposure to South East Asia started during his travels to Thailand and Burma in his undergraduate years back in the 1980s. According to him, there were not many students from Europe visiting the region during that time. As a young, aspiring travel enthusiast, he was very intrigued by the people that he encountered. Idealism and curiosity led him into his quest of trying to comprehend the unfamiliar. Upon graduation, he went to teach in Japan for a couple of years but eventually concluded that Thailand appealed to him more. He then went back to Thailand and underwent intensive immersion, where he lived with a local family and studied the Thai language intensively.

Professor McCargo has contextualised the political and legal landscape of Thailand as one that is characterised by political problems where military coups, constitution changes and political crises are a common phenomenon. He has further pointed out the judicialisation phenomenon of politics in Thailand following two 2006 speeches given by the King, in which he urged judges to solve political problems. Thereafter, the centre of gravity in Thai politics shifted to judges and court cases. Through the courts, political decisions were made, where court cases are brought against politicians, eventually resulting in them being banned from office and parties being dissolved. Professor McCargo conducted a year’s ethnographic fieldwork in Bangkok, much of it spent in courtrooms. His latest book addressing these issues is Fighting for Virtue, Justice and Politics in Thailand (Cornell University Press, 2019); and related articles are on the way.

Another project Professor McCargo is working on centers around the 2019 election in Thailand and mainly deals with developments around the election and the creation of new parties. He is now writing a new book with one of his former PhD students on the rise and fall of the Future Forward Party, which was recently dissolved by the Constitutional Court.

When being asked of his views on the prospects of studying Asia, he has framed the current era as being the Pacific century, where the centre of power has shifted away from the United States and Western Europe. Professor McCargo highlights how many many global trends in contemporary politics such as populism, polarization, direct communication of authoritarian leaders to its subjects and the decline of political parties had their origins in South East Asia. This not only serves as a paradigm shift in the contextualisation of Asia as a peripheral area of the world, but it illustrates how Asian countries can be studied from a comparative perspective alongside their Western counterparts.

Professor McCargo does not find the idea of a distinction between ‘East’ and ‘West’ analytically useful, and is reluctant to be labelled with any particular approach. He believes all that matters is quality of academic work, which is not restricted to any specific styles or methodologies.

As a proponent of qualitative field-based work, Professor McCargo believes linguistic and cultural fluency are essential, since they allow researchers to communicate directly with their research subjects. This is seen in one his previous projects on the southern Thai insurgency : he spent a year driving around the region talking to hundreds of informants, using an approach derived from political ethnography. Despite criticisms of such approaches by many political scientists as being too time-consuming and subjective, McCargo argues that qualitative and quantitative data can and should complement each other. Cross-checking with documentary sources may be done to verify the validity of a narrative.

Commenting on the inherent sensitivity of certain research topics, Professor McCargo notes that he has often benefited from the willingness of interview informants to share important information with him as a researcher. Some Southeast Asian informants see academics as potential allies in communicating their experiences and messages to the wider world. McCargo notes that for most of his professional career Thailand has been a relatively open society where informants feel relatively free to speak out – making it an easier place to conduct fieldwork than some other Asian countries. The presence of large numbers of foreign tourists means that outsiders have become a familiar sight in Thailand, rather than a cause for concern.

On a concluding note, Professor McCargo talked about the challenges of getting social scientists to change their perception that studying Asia is a minority pursuit, when in reality the majority of the world’s population lives in the non-western world. The study of Southeast Asian politics tends to be viewed as a niche field within the discipline of comparative politics, yet this work actually has a much broader intellectual reach as Asia becomes increasingly salient both politically and economically.

The Centre hereby takes the chance to express our gratitude for his time and his interview and looks forward to working with him soon in future projects.

The interview and report were done by the Center’s intern, Mr. Kelvin Choo Wei Cheng. Kelvin is a undergraduate student at the University of Warwick, and an exchange student at University of Helsinki for the autumn and spring terms 2019-2020.