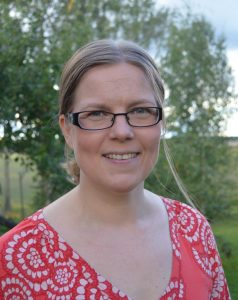 Global warming and climate change is a topic that we see and hear about on a regular basis. When discussing climate change, it is impossible not to mention China. Sanna Kopra is a post-doctoral researcher in the Arctic Centre located in the University of Lapland and a visiting scholar in the Aleksanteri Institute located in the University of Helsinki and she has conducted extensive research into China in relation to climate change. Before examining her current activities in more detail, let’s revise her impressive academic history in the field of China.

Sanna has been interested in China for a lengthy period. Her interest was first sparked during her undergraduate studies, when she minored in Asian studies through the Finnish University Network for Asian Studies. “China had just become the biggest emitter of greenhouse gases and it protested all attempts at setting emission reductions for developing countries. I examined China’s rhetoric in international climate discussions in my undergraduate thesis and this is something that still intrigues me”, Sanna reveals.

In addition to researching and studying China, Sanna has studied Chinese both in Finland as well as in China. Originally, Sanna envisioned taking advantage of her Chinese skills in her studies, but when her research developed and became more theoretical, there was no immediate need to utilize materials in Chinese. “For that reason, my Chinese skills have become more passive. In terms of my research, this is fine, as I’m interested in China’s role in international politics rather than China’s domestic policies”, Sanna observes.

All of her hard work in researching China and climate responsibility has certainly paid off. She won the International Studies Association English School Section’s Outstanding Research Paper Award last spring in the Junior Scholar category for her paper on ‘China and International Climate Responsibility: Agency and Institutional Change.’ Sanna divulges: “Barry Buzan, one of the gurus in the field, commented on the paper: ‘well done, read more, and carry on’. This alone was very reassuring for a young researcher like myself, but the award was the icing on the cake!”

“Environmental responsibility is a meaningful way for China to define great power responsibility, and thereby legitimize itself as a great power. Although China has several domestic reasons to control climate change, Beijing is also unwilling to sacrifice its economic interests for the environmental good. This is why the European Union has a significant role – with ambitious climate politics the EU can encourage China to take even bigger responsibility”, Sanna discloses.

The withdrawal of the USA from the Paris Agreement, and people’s increasing interest in the environment and sustainable development in general, underline the fact that Sanna’s book concentrates on an exceedingly current topic. Sanna flashes that she could even consider writing another book one day, but about China’s Arctic politics.

Indeed, several countries are interested in the Arctic and their resources, and China is no exception. One indication of China’s interest in the region is China receiving an observer status in the Arctic Council. This means that even though China has no voting rights, it can now participate in the Arctic Council as an observer country. Furthermore, the Arctic is “an important region for environmental sciences and China is interested in knowing how Arctic climate change can influence China in relation to food safety and weather phenomena, to name a few”, Sanna explains.

The Academy of Finland recently awarded Sanna with a three-year grant for her research on the rise of China and the normative transformation in the Arctic region in spring 2018. She is currently examining how the rise of China is shaping the processes in which notions of responsibility are defined, allocated and operationalized in the Arctic.

“While China’s Arctic interests have been studied a great deal, most of that research has failed to consider which values and norms actually guide China’s Arctic activities, or how China’s growing role in the area challenges the already existing norms and practices in the Arctic areas”, Sanna clarifies. This is what her current research delves into.

When asked about her 2018 highlights, her response is immediate: publishing her first book and receiving a grant from the Academy of Finland. 2019 has also started memorably, as she is spending the first couple of months on a research exchange at the University of Tromsø in Norway. “I hope to learn a lot about Arctic politics and I look forward to meeting new people. I also wish to see amazing scenery – despite the polar night!”