Also Digitalia was presented at the Heldig Summit on 18.10.2017 , where there was 85 presentations and bit over 230 participants from universities and cultural heritage organizations.

“Developing the Digital World Together”

Heldig director, professor Eero Hyvönen opens the summit by explaining Heldig basis and the growth both in personnel and the facebook group. A Digital Humanism forum is also formed for the life-long learning for the researchers, where online learning materials and MOOCs is being developed and if there is short tutorials to be shared they would be interested.

Session 1 was about researhcer use. Professor Hannu Toivonen explains the data science and how the master science master’s programme is focused. There is also Helsinki center for data science, as a multi-displinary field, which is coordinated by the Kumpula (more info at Data Science Msc->”Contact”). University of Helsinki has lots of interesting research like web-scale surveillance of the news media (http://newswebs.cs.helsinki.fi ) or https://blogs.helsinki.fi/methodology , which is generating for eample R-environment for analysing text-based Suomi24 discussion forum data. Also everyone might have already about Citizen mindscapes, which was presented by telling about the unique interests of the researchers working in the collective. The future generation of digital humanists get onwards by learning, where one example is the introduction to open data science , which professor Hyvönen feels are important for DH and UH at large. Also the legal issues were taken presented by the LegalTechLab and  Growing Mind project, which has just got Academy of Finland funding (2018-2023) with regard to digitization of schools. FIN-CLARIN was there to describe its infrastructure for DH mentioning e.g. FIN-CLARIN corpora, 18 GW data in > 650 databases, which can be found via KieliPankki (both the corpora and the tools). The Bank of Finnish terminology in arts and science is also a unique research infrastructure, to be a continuous database for all research done in Finland.

After the 1st break National Library of Finland presented their services Finna (in a way as a metadata aggregator of several cultural heritage institutes), Finto.fi about ontologies and finally digi.kansalliskirjasto.fi with the extensive newspaper collection, which is being used e.g. in Digitalia and Comhis projects. National Archives talked about arkisto.fi/df (and mentioned about a seminar on 24.11.)

Kotus presented its materials via video, which is available online:

Then SKS presents the scholarly open access monographs at https://oa.finlit.fi , to offer open access research books as well as Codices Fennici https://www.codicesfennici.fi  . Elias Lönnrot letters online offers XML, and service as a whole aims for total shareability, so that anyone can use tools developed by the digital humanists, data can be downloaded by collection or as a whole.

On afternoon the rapid fire of presentations continued with CSC and Ministry of Finance presentation, where focus was in building up a common infrastructure, which also researchers could use. The senior researcher Toni Ryynänen from the Ruralia institute presented how the digitized newspapers from their full timeline can give insight on how specific discussions have evolved.

Ruralia institute consumer researcher Toni Ryynänen on changing use of newspaper ads from deaths to cars since 1917 at #HelsinkiDH #HELDIG pic.twitter.com/JNP4lsSQqI

The Helsinki University library talk is about linked data, where demo was also available during the evening session. Https://opensubtitles.org was mentioned as a data source, which was used as http://opus.lingfil.uu.se  , to create parallel corpora of having same text available in multiple languages, which in a way also visualizes differences, but also points where different language translations agree. Depart of Modern Languages of UH also showed examples how they had utilized Tensorflow for analyzing datasets, ending with result that speech and DH are a perfect match.

One theme of the summit was also the concern how to make complex world easier for the researchers. Mietta Liennes presented http://chipster.csc.fi and the Mill https://www.kielipankki.fi/support/mylly , which take care of tool environment, and just with the CSC account it is possible to login and access to the resources, so that you can select data, and pick the tool, which can be run and after a while the results appear and can be viewed either in the user interface or downloaded to an excel file or shared to a colleague. Based on the brief run-through on the summit, definitely something a researchers should take a look!

Professor Timo Honkela was also present, talking about various fields, which digital humanities combine. His new book is now in printing and will be available soon, the hope is that the peace machine activities will lead to better lives onwards and even until  2117.

In digital Russia studies from the Aleksanteri Institute talked about Digi-Pravda and various ways digitalisation is visible. Daria Gritsenko also asked to anyone who is interested about Women in Tech, to check out their website at http://www.digitalicons.org (Studies in Russian, Eurasian and Central European New Media). Professor Parvinen told about the mixed reality user laboratory. Next topics talked about networks of different types, talking about Aalto work with family research or social networks – what do the networks tell and why they have formed in such a way. Digital cultural history, Warsampo were also part of the presentation pool.

Besides Digitalia , also Comhis project was mentioned as one of the research cases who use digitized newspapers as source material.

All in all, it seems that the digital humanism in Finland has a good network of people and let’s hope that there are possibilities to collaborate later on, too , at least when some initial glimpse to each others work has been got. Unique materials, unique methods and also unique ideas,  that will help current research but also work as an start for the next wave of data scientists or so called digihumanists, for whom there are own training programs also forming.

All of the materials presented can be found from the Heldig pages, and even more can be found via publications of each research team. Let’s see maybe next year if the summit reappears, it could beat its record of 85 presentations and aim higher to the even 100, there seem to be so much happening all around. 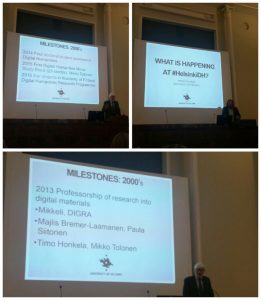 Significant portion of the Mikkeli-based Digitalia’s research team was present as Digitalia will be a contact point towards Heldig utilizing the regional knowledge of digitalization in practice. The room was booked solid  with over 220 registrations, so digital humanism is interesting field for many as can be seen from the Thinkwall of the hashtag #helsinkidh .

In the symposium the various steps leading to the creation of the Heldig centre were visited with acknowledgement of the joint collaborative work, which was required already at the application phase for this focus area of University of Helsinki, but which will also be needed in the following years.

The collaborative nature was also highlighted in  the Professor Patrik Svensson, from University of Umeå, who went through the experiences in building a collaborative, physical phase HUMlab to increase communications and innovations by providing a place for meet-ups, conferences and workshops.

In order to help Heldig further, professor Tolonen also asked everyone to answer and share information about the Dariah-survey, which aims to improve digital research infrastructures.

The materials of the symposium are already available at the Heldig website.  Congratulations to Heldig! The current events of the Heldig can be followed by its website http://heldig.fi .