The exterior of the mosque. Photo: Anna-Liisa Tolonen

The city of Córdoba hosts a remarkable monument, which has two names: Mezquita and Cathedral. According to travel guides, the building is a former mosque which could include up to 40 000 persons. It is also the main church of Córdoba at which Christians regularly gather to celebrate the Mass.

***
The history of the city, as well as that of all Andalusia, is characterized by diversity of religions. In the 12th century, the Jewish scholar Maimonides as well as the Muslim philosopher Ibn Rushd (known also as Averroes) lived and worked in Córdoba, in which one of the world’s largest libraries was located. 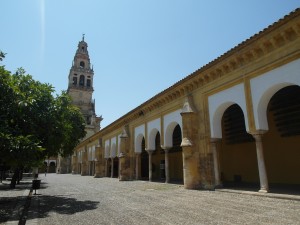 After the conquest in 1236, the minaret of the mosque was converted to the bell tower of the cathedral. Photo: Anna-Liisa Tolonen

A visitor may find the beauty and sense of harmony of the mosque-cathedral reassuring. At the same time, the space evokes anxiety. Is this peaceful coexistence, religious traditions in smooth historical continuum or blatantly against one another? Are both Islam and Christianity presented equally or is one repressed by the other? And where does the over and over conquered site hide the Jewish history which is also characteristic of the area? 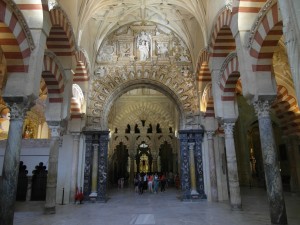 Fine pieces of both Muslim and Christian architecture coexist and collide in the mosque-cathedral. Photo: Anna-Liisa Tolonen

Religious tolerance and recognition were themes discussed at the annual meeting of the European Association of Biblical Studies (EABS) organized this year in Córdoba. In a seminar focused on early Christianity, eleven scholars presented their work. Among them were also Outi Lehtipuu, Anna-Liisa Tolonen, and Ismo Dunderberg, representing Reason and Religious Recognition CoE. Lehtipuu evaluated early church fathers’ recognitions of women in their comments on “no longer male and female … in Christ Jesus” (Gal 3:28). Tolonen discussed early Christian identity politics: (how) could same figures be respected both as Jews and as martyrs for Christ? Dunderberg presented Origen’s attitude toward his rival Heracleon, whose thoughts Origen transmits in critical but also approving manner.

***
In the concluding discussion of the seminar, themes of tolerance and recognition met with ideological-critical questions about power and violence. The participants reflected on the naming of events and phenomena, which often already involves certain positions, attitudes as well as problems. The study of encounter between different religions does not lead into simplifying either–or conclusions; rather, it may challenge us to understand history in greater diversity. While it is irresponsible to deny or belittle conflicts, a critical analysis of coexistence cannot be satisfactory if only apparent contradictions dominate our views of history.