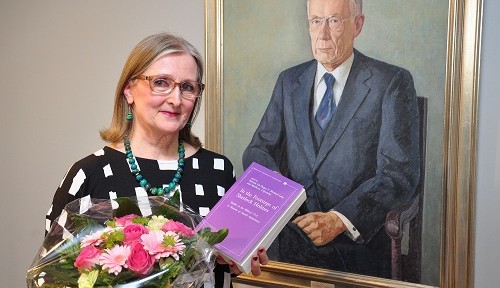 Friday, May 2, was a day of celebration. Over 30 people were gathered in the Faculty Room as Anneli Aejmelaeus’s Festschrift was handed to her by Kristin De Troyer, Michael Law, Marketta Liljeström and the jubilant group of friends and colleagues.

The project started three years ago, and the plan was to mark Anneli’s 65th birthday. The actual date was in last September, so depending on the viewpoint, the book was revealed to Anneli half a year too late, or as she said herself, four and half years before her 70th birthday, 70 being a perfect number for a Septuagint (=70) scholar. However, the dates and numbers are not as important as the gesture of appreciation and warmth that fuels Festschrift projects, and appreciation and warmth were truly palpable in the small celebration in the talks by Prof. Petri Luomanen, and Prof. Vice Dean Risto Saarinen, and the editors. There were many who would have wanted to be present but could not. One of them was Martti Nissinen whose letter to Anneli was read to her. And what would be celebration without music? Jouni Harjumäki played  Khatshaturian’s Toccata at the end of the event.

The name of the Festschrift deserves an explanation. Anneli often compares the work of a text critic to the work of a detective. This is metaphor that her teacher Ilmari Soisalon-Soininen used, and as Anneli got to know Carlo Ginzburg and his ideas on the evidential paradigm, the allegory has become a favorite of hers. As a well trained “private detective” Anneli had been seeing hints and clues around hinting her that something was going on: such as colleagues hiding their laptop screens from her, certain silence around her concerning publication of certain papers given in conferences, occasional footnotes in articles and so on, and she had a hunch of a forthcoming book. However, the hunch did not dim her joy as she finally got the book in her hands!

The Festschrift In the Footsteps of Sherlock Holmes – Essays in Honour of Anneli Aejmelaeus. Ed. by K. De Troyer, T. M. Law, and M. Liljeström. Contributions to Biblical Exegesis & Theology, 72. Leuven: Peeters (2014) consist of 39 essays  by international contributors – distinguished scholars, younger researches as well as Anneli’s own students. The essays are divided into five sections, the themes of which are near and dear to her: 1) The Septuagint. Origins and Translations, 2) The Septuagint and the Versions. Textual Criticism and Text History, 3) The Septuagint in New Testament and Christian Use, 4) The Septuagint in Jewish Tradition, 5) The Hebrew Bible and the Dead Sea Scrolls.

Warm thanks to all the contributors, as well as the Centre of Excellence and the Faculty of Theology for making this celebration possible! And most importantly, thank you to Anneli whose career, research and personality continue to be a source of inspiration to us all!