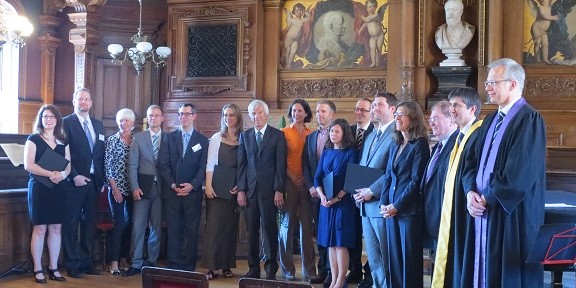 The Manfred Lautenschlaeger Award for Theological Promise 2014 (former John Templeton Award) was granted this year to ten scholars for their dissertations or the first book after it that pertained to the topic of God and Spirituality as broadly understood. This year’s award ceremony and an attached colloquium took place in the picturesque town of Heidelberg in Germany on the 23rd– 26th of May.

The official award ceremony took place on Friday the 23rd in a grand setting provided by the Great Hall (Alte Aula) of the Old University. The ceremony began with words of welcome by the Vice-Rector of the University of Heidelberg Prof. Stephen Hashmi, the Director of the FIIT (Forschungszentrum Internationale und Interdisziplinäre Theologie) Prof. Michael Welker, the Dean of the Faculty of Theology Prof. Johannes Eurich, and the founder of the Manfred Lautenschlaeger Foundation Dr. h.c. Manfred Lautenschläger. These warm speeches were followed by a presentation of the ten award winning books by Prof. Manfred Oeming, Prof. Peter Lampe and Prof. Michael Welker, after which the Chancellor of the University Dr. Angela Kalous presented the awards of $10,000 to the winners. This year’s ten winners of the Manfred Lautensclaeger prize are: David Albertson (Chicago), Michal Bar-Asher Siegal (Yale), Matthias Becker (Tübingen), Jennie Grillo (Oxford), Wolfgang Grünstäudl (Regensburg), David Leech (Cambridge), Mika Pajunen (Helsinki), Angela Roskop Erisman (Hebrew Union), Devin Singh (Yale), and Matthew Thiessen (Duke). The ceremony ended with a keynote lecture by Prof. Dr. Dr. h.c. Detlef Junker, Director of the Heidelberg Center for American Studies, on the topic of Chosen People: The American Civil Religion, which was followed by a reception in the Bel Etage of the Alte Aula.

The winners of the award also took part in a two-day colloquium that was held on Saturday (24th) and Monday (26th). In addition to the winners, the participants of the colloquium included some of the senior scholars from around the world who had evaluated the books nominated for the award, as well as several Heidelberg professors from the relevant fields of research. The award winners presented their current research projects in the colloquium, which were then discussed at length. The presentations ranged from topics dealing with the Hebrew Bible, Qumran, and the New Testament, which were mainly discussed on Saturday, to early Christianity, rabbinic Judaism and broader topics, like love and money talked over on Monday.

In between the days of the colloquium was a Sunday spent under three domes. The day began with an Ecumenical University Church Service at the Peterskirche that was partly officiated by some of the award winners, evaluators and Prof. Michael Welker. The afternoon was spent at the fabulous Schwetzingen palace and its gardens with a lunch at the palace restaurant followed by a guided tour of the grounds.

Sunday evening in turn was spent at the Heidelberg castle with a champagne reception on the castle terrace enjoying a great view of the town’s center and the Neckar river, followed by a festive dinner at the castle restaurant.

The international and cross-disciplinary discussions with the organizers, evaluators, and other winners were both delightful and educating, ranging from strictly academic discussions to the picking of the “official” tie of the 2014 proceedings. After the award ceremonies and the colloquium the winners were presented with another prospect for the immediate future. They will have the opportunity to suggest together with another winner(s) from a different country and discipline an international and interdisciplinary conference on an important topic that has a bearing also on the modern society. Every year one or two such Lautenschlaeger colloquiums are supported by a sum of 15000$ each. The deadline of the Manfred Lautenschlaeger Award 2015 is already past, but I strongly encourage everyone in the CSTT (and colleagues from other universities and disciplines as well) to keep this prestigious award in mind and to apply for it in the coming years, for further information on the award and this years winners, see http://www.uni-heidelberg.de/fiit/mlaward_en.html