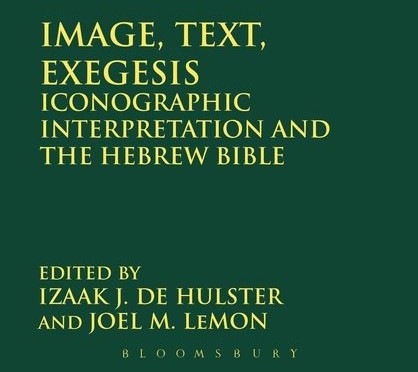 Here is the abstract:

Images from the ancient Near East are an important though generally underutilized source of data for interpreting the Hebrew Bible and the cultural context from which it emerged. The essays in this volume highlight the ways that ancient Near Eastern iconography can inform exegesis. This aim is accomplished through case studies in iconographic exegesis that exhibit sound methodologies for relating images and texts.

Since the 1970s, biblical scholars have been turning increasingly to iconography as a source for understanding the religion, history and literature of the ancient Near East. The essays in this volume tackle two thorny issues: 1) how images reflect the cultures that produce them and 2) the nature of the relationship between images and texts, both within discrete cultures and among different cultures. Until now, there have been relatively few methodologically self-conscious treatments of ancient iconography and its relationship to the biblical text. So this volume addresses a clear need for demonstrating transparent and consistent methods for iconographic work among biblical scholars.

And here is the table of contents:

Jackie Wyse-Rhodes — “Finding Asherah: The Goddesses in Text and Image”

Martin Klingbeil — “Children I have raised and brought up” (Isaiah 1:2): Female Metaphors for God in Isaiah and the iconography of the Syro-Palestinian Goddess Asherah”

Meindert Dijkstra — “The Ivory Beds and Houses of Samaria in Amos”

Maria Metzler and Michael Chan — “Lions and Leopards and Bears, O My: Re-Reading Isaiah 11:6-9 in Light of Comparative Iconographic and Literary Evidence”

Izaak J. de Hulster — “A God of the Mountains? An Iconographic Perspective on 1 Kings 20:23”

The hardback version costs $120 and the e-book version $33,99. For more information see the website of Bloomsbury.