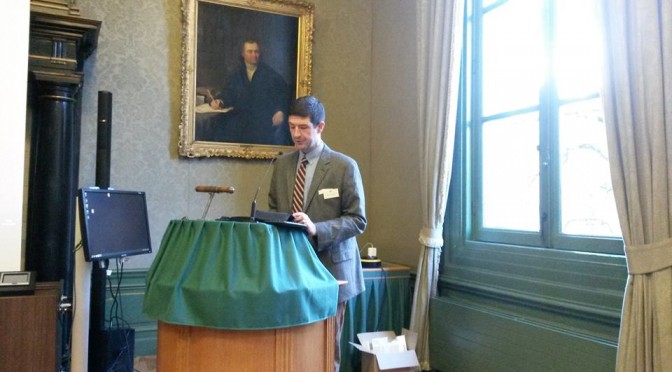 On 27 October 2015 a small yet diverse pool of scholars and students converged for a three day meeting in an impressive 17th century mansion in the center of Amsterdam, Netherlands (click here to watch a video about its history). The conference, organized by Mladen Popovic, Sabrina Corbellini, and Stefania Travagnin (all of the University of Groningen), brought together scholars of Early Judaism, Medieval book historians, and experts on religion in the Chinese sphere to discuss religious texts from a cross-cultural and interdisciplinary perspective. The three organizers of the conference, who are renowned scholars in each of the three fields represented at the meeting, recognized that most fields that study religious texts and extra textual phenomena do so only within the boundaries of their discipline and to some extent even under heavy influence of the religious traditions to which the texts belong. The organizers recognized that this is a lamentable state of affairs given the fact that the multiple disciplines that participate in the study of religion necessarily focus on texts as objects of religious expression and sources of religious ideology. Thus, with funding from the Royal Netherlands Academy of Arts and Sciences (KNAW) which also provided its headquarters, the Trippenhuis, as the venue for the meeting, the organizers brought together panelists from their respective disciplines to discuss the study of religious texts around five broad themes: modality of texts, authority of/on texts, practice (visualizing and ritualizing texts), materiality (texts as objects), and transmission (both through scribal transmission in a single language and in translations).

With only 27 speakers over the three day period, all panels were organized as plenary events wherein panelists would have the opportunity to read short papers dealing with one of the broad themes of the conference as it regarded a specific text or corpus within one of the represented disciplines. After the short papers there was a period of extended open discussion wherein challenges to specific conclusions, reflections on method, and comparison between the work of panelists could be addressed. Over the course of the three days at least one panel, frequently two, were dedicated to each of the five themes. Highlights of the conference for me included Carola Erika Lorea (La Sapienza University of Rome) speaking about Bengali Baul songs as performed scriptures which challenge the presupposition of the written word as religious text, Arie Molendijk (University of Groningen) presenting on how the printing of the Sacred Books of the East in some ways constructed religions and scriptures from a Western Judaeo-Christian perspective, and Eibert Tigchelaar (KU Leuven) speaking on the importance of material differences in the Dead Sea Scrolls and the relative dearth of attention to the ways in which these should affect the understanding of the texts therein.

Although such a conference runs the risk of scholars talking past each other due to their lack of shared knowledge of the primary text corpora or religious traditions, this meeting successfully avoided such a fate. It was admittedly not always easy to follow the intricacies of the arguments in any given paper from outside one’s discipline (for me, those papers outside of Early Judaism), but most scholars did a good job of illustrating some of the theoretical and interdisciplinary problems to which their work contributed possible solutions. Nevertheless, the truly interdisciplinary and cross-cultural engagement occurred in the open discussion period wherein panelists and attendees alike were allowed the opportunity to really confront others’ presuppositions. On the whole the conference was a success, but I think I can speak for most attendees in saying that this was only a first step, and that far more work should be done across the various disciplines dealing with texts and the problems related to them as objects of study.