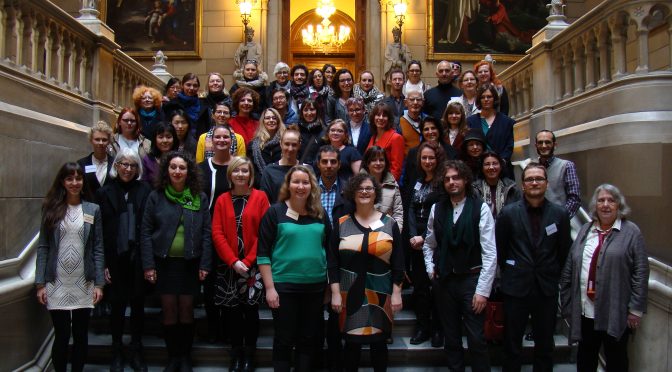 By Saana Svärd and Agnès Garcia-Ventura

The aim of both meetings was to discuss different methodological and theoretical approaches to gender within the framework of ancient Near Eastern studies (including archaeology, art history and text studies) and to enable fruitful dialogue between these approaches. Moreover, for this second workshop, colleagues from neighboring disciplines were also encouraged to submit proposals, in order to enrich these conversations further. As a result, the second workshop included colleagues from the disciplines of Assyriology, Archaeology, Egyptology, Phoenician and Punic studies, and Biblical studies (see the full program).

The conference lasted three days and featured 33 communications, a poster session where six posters were presented, and a projects panel where nine new and ongoing projects where discussed. The event was well attended and all in all included roughly 90 participants, including speakers and poster presenters. The speakers and poster presenters came from various universities in twelve countries, namely Belgium, Denmark, Finland, France, Germany, Holland, Italy, Japan, Malta, Spain, the United Kingdom, and the United States of America.

The results of such a rich and diverse conference cannot be summed up in a short blog post. Suffice it to say here that the sheer chronological, geographical and methodological scope, as well as the general high quality of papers, promises good things for the future of gender studies within the context of ancient Near Eastern studies.

Since both workshops have been well received and the number of participants has increased, the organizers decided to plan a third workshop in the series, hoping the initiative will have continuity as a biannual conference. Thus, the third edition of the meeting, co-organized in cooperation with Professor Katrien De Graef, will be hosted by the University of Ghent (Belgium) in 2019. More information will be published in due time. Please feel free to contact us if you have any questions and/or if you want us to keep you posted on other future ventures related to gender studies and ancient Near Eastern studies we may launch. You may contact us at: agnes.ventura[AT]gmail.com or saana.svard[AT]helsinki.fi.