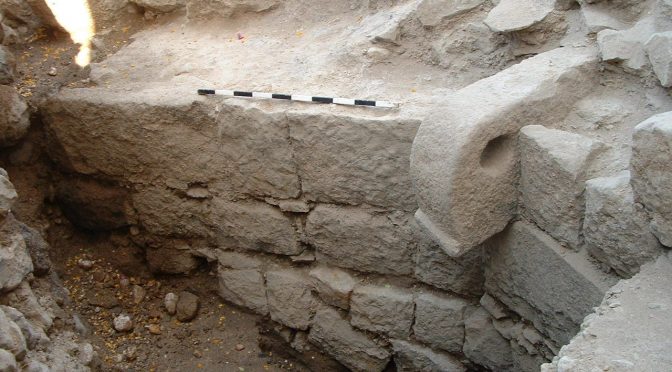 While archaeological excavations often help us to elucidate the narratives found in ancient texts, trying to combine the two sources can sometimes lead us astray. Examples where texts are used for the interpretation of archaeological material usually receive a lot of attention in the media. Cases when archaeology and text cannot be so easily used together are considered much more rarely, especially in the weeks around Pesach and Easter when hyperbole in terms of the importance of certain finds tends to hit the media machine. I wish to focus here on a case where text and archaeology cannot be so straightforwardly combined.

The case to which I refer here, involves the incomplete remains of a curved ashlar structure exposed some 15 years ago in Tiberias, a city located on the western shore of the Sea of Galilee, Israel. When rescue excavations were undertaken there by the Israel Antiquities Authority, due to the expansion of an existing hotel (Gallei Kinneret), the excavators soon concluded for various reasons that the remains were those of the Roman stadium mentioned by the Jewish historian Flavius Josephus in relation to events happening in Tiberias during the First Jewish Revolt (66–67 CE). First of all, although the structure was not completely exposed, its curving shape resembled in the eyes of the excavators the semicircular end (a sphendonē) of a common stadium. Second, first century CE pottery in a deposit found against the structure suggested to them that the construction date also fit well with a first-century stadium as described by Josephus. Third and finally, the structure was found to the north of the actual settlement and very near to the lakeshore, just as Josephus appears to have hinted in his narrative.

The conclusions that this was the first century stadium referred to by Josephus obviously spread quickly in the mainstream media and gradually solidified as well in historical scholarship. Yet the reported finds kept begging some important questions regarding the suggested identification of the structure: Why was a stone block with a pierced hole protruding from the curved structure into its alleged arena side? Why was the width of the curved structure not everywhere equal in dimension as is common in stadium architecture, but instead became narrower toward the northeast? And why was no arena floor level discovered where one should have been? The excavator reported the accumulation of a thick layer of lake clay within the stadium arena after the stadium was already abandoned, but neither above nor below the clay layer was there any indication of an arena floor. Ultimately, upon close reading, the findings used to support a coherent narrative that connected both archaeology and texts slowly became more and more incoherent and problematic.

As we start to re-examine the problem, the question of how Josephus’s account is read and understood in order to conform to the exposed structural remains is particularly relevant. From the outset, the excavation results appear to have been guided by an understanding that the stadium Josephus was referring to was stone-built and monumental in nature. While it is true that in his later-completed Vita (92) Josephus refers to be standing on “a certain high wall” (τριγχός), earlier, in his Bellum Judaicum (2.21.6 §619) he apparently was standing on simply “a hillock,” “a hill,” or “a mound” (βουνός). Thus, Josephus does not, in fact, imply that we are dealing here necessarily with a stone-built monumental structure. Moreover, Josephus’s use of the word βουνός stands at odds with the common terminology used for natural grass-covered stadiums (χῶμα = “bank of earth”; e.g. Pausanias Descr. 2.27.5, 9.23.10). While χῶμα in general refers to a manmade structure, βουνός used by Josephus is almost exclusively used by ancient authors to refer to natural mounds. This stands even more at odds with the idea of a manmade, stone-built stadium of monumental nature, as the excavations results presumed in order to connect the archaeological find of a curved ashlar structure to Josephus’s written account.

Ultimately, we may ask the question what, aside from that what we already supposedly knew from Josephus, did the excavations actually elucidate? Did the excavation results confirm that Josephus was talking about a manmade, stone-built structure? Or did their results led us astray, and did they interpret the textual source in such a manner simply to connect it to the archaeological findings? In my opinion, the historical narrative built by the excavation results created a “piecemeal history” easily digestible by the mainstream media and public, but “as is,” it provided few new insights into the complexity of the cultural, social, and economic life of the ancients. I do not mean to criticize the excavation results as a whole, but merely the way in which a historical narrative is built around a few written passages and small excavation finds.

I have recently published an article (read here the article ahead of print here; or download an open access version here), From Stadium to Harbor: Reinterpreting the Curved Ashlar Structure in Roman Tiberias, in which I argue for a re-identification of the exposed structure as a quay wall, a stone platform built along the lakeshore to accommodate the loading and unloading of boats, with a projecting mooring stone to which the boats could be attached (remember the odd, pierced stone block, noted above). Reiterating all the arguments in support of this identification would make this piece far too long. However, research does not happen in isolation, and it should be stressed that (although I would like to think otherwise) my article was not an ingenious “Eureka” moment. Instead, I wish to highlight how ongoing excavations often lead us to reconsider finds exposed years, decades, or even more than a century ago. In my case, this new perspective was opened up by the publication of the Magdala excavations, some 6 km to the north of Tiberias, conducted by the Magdala Project under the leadership of Stefano De Luca. Their research into the remains of a Late Hellenistic and Early Roman harbor with several mooring stones still attached into the quay wall was crucial to the new understanding of the structure at Tiberias.

If my proposed identification is correct, this would be the first physical evidence for the presence of a lake harbour at Tiberias during the Roman period (there is evidence for a later, Byzantine harbour on the southern end of the settlement) and my identification adds to our understanding of the economic importance for this town of the fishing industry at this time. This latter topic is one of growing importance; for example, the development of the Galilean fishing industry was recently discussed in an article by my Helsinki colleague, Raimo Hakola, “The Production and Trade of Fish as Source of Economic Growth in the First Century CE Galilee: Galilean Economy Reexamined.”[1]