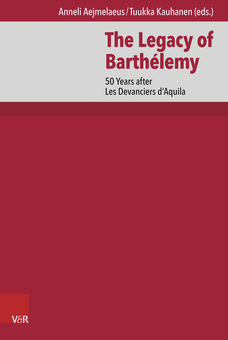 Les Devanciers d’Aquila by Dominique Barthélemy (1963) is an epoch-making work on the textual history of the Septuagint. On the basis of his analysis of the Nahal Hever Minor Prophets Scroll, Barthélemy developed his theory of an early Hebraizing revision (so-called kaige revision), designed to bring the traditional text of the Septuagint closer to the Hebrew text, and recognized examples of it in the B-text of books such as Joshua, Judges, and Samuel-Kings. The work of these early Hebraizing revisers resembled the later very literal translation by Aquila; hence the name of the book, “the predecessors of Aquila”.

Textual scholars of today continue in the footsteps of Barthélemy and work on the same questions that were raised in Devanciers: How extensive was the influence of the kaige revision and how can it be recognized? What is the nature of the Lucianic text: when does it represent the Old Greek and when does it give a stylistically revised text? What is the relationship between the kaige revision and Theodotion’s revision of the Septuagint?

The present volume mainly consists of papers presented at the 50th anniversary symposium of Les Devanciers d’Aquila that was held in connection with the SBL International Meeting in St Andrews, Scotland, in 2013. The papers focus on history of research, case studies on the text of Samuel-Kings (1–4 Kingdoms), and studies on the text-historical position of specific witnesses.

For more information and to order the book, please visit Vandenhoeck & Ruprecht.