The CSTT Annual Meeting of this year took place in the most beautiful environment of the Zoological Station of Tvärminne in Hanko, Finland. The days were sunny, chilly, and full of action.

The title of this year’s meeting was “Tradition” – that is, the final “T” of our acronym. All four components of the name of our Centre of Excellence, “Changes in Sacred Texts and Traditions”, have now served as the title of an Annual Meeting, as we have previously discussed the topics of “Sacred” (2014), “Text” (2015), and “Change” (2016).

The topic “Tradition” was introduced by two excellent keynote speakers, Eva Mroczek and Seth Sanders, both from the University of California Davis. Eva discussed theories of scriptural survival in ancient Judaism and Christianity, demonstrating that there was a “historical” interest in ancient writings from early on. For instance, Hypomnestikon, a Christian text from the 5th (?) century is interested in books that are mentioned in the Bible but have not survived. Seth analyzed the unique problem of the Pentateuchal tradition which, in fact, differs a lot from the alleged Near Eastern “empirical models” by intertwining different, sometimes contrasting layers of editing. Transmission of traditions was approached from different angles also by Jutta Jokiranta (rituals from the cognitive perspective) as well as our new members Gina Konstantopoulos (Mesopotamian incantations) and Jessica Keady (masculinities in the Dead Sea Scrolls).

A lion’s share of this year’s program consisted of workshops, which not only brought an unusually strong element of action to our working – and also a lot of fun! We practiced writing a cuneiform tablet and invented rituals for archaeologists to reconstruct; we played the amateur anthropologists trying to understand a foreign tradition, and so on. Perhaps the most thought-provoking  workshop was that on CSTT, gender, and tradition, especially Anneli’s personal talk on her on experiences as a female biblical scholar. Hilarious as many of these workshops were, they gave us reason to look behind our methods and practices: How do we construct a ritual from the scrappy evidence we happen to have at our disposal? What do we think we see when looking at a female-shaped figure, be it a stamp, an ancient figurine, a commercial or, perhaps, a car? What does it take to produce a cuneiform tablet? Most importantly, the workshops made us to look behind our methods and practices, asking why are we doing the things we do.

One of the sessions was devoted to the search of the the crossroads where the textually focused Teams 2 and 3 meet the culturally and historically oriented Teams 1 and 4. We contemplated the idea the this focal point could be found in the work and person of the scribes and other cultural producers: 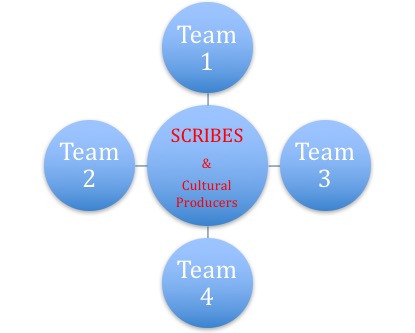 CSTT does not only study changes in sacred texts and traditions, but it wants to change scholarship as well. The 2017 Annual Meeting gave us another opportunity to experience how importantly the collegial spirit we have developed together in the CSTT helps us to learn together, increases the will to understand each other’s research questions, motivates us to collaborate, and in this way contributes to changes towards the better in our fields of scholarship.