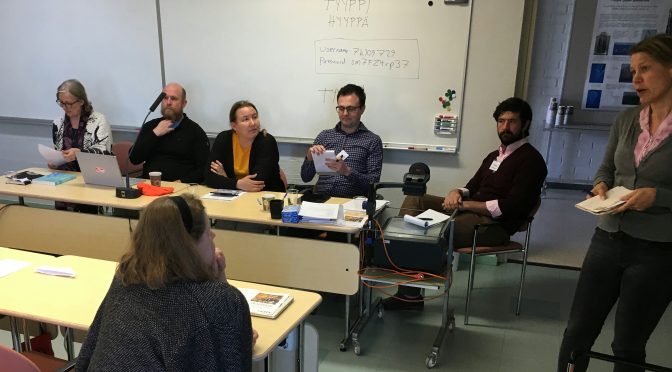 by Saana Svärd and Hanna Tervanotko

We first got the idea to do something on gender at the 2016 CSTT annual meeting in Saariselkä, where, during the joint sessions, there was some discussion on gender both as an analytical category for research and as a factor in the scholarly community in general. CSTT is a large community and the research topics we operate with resonate only to a certain extent with those of our colleagues. Some of the most fruitful and engaging discussions within the entire group have been those that somehow address philosophy of research and involve everyone.

Both aspects, research categories and community, are relevant for the CSTT. On the one hand, some researchers within the CSTT directly inquire about gender in antiquity. For instance, Saana Svärd’s project analyzes construction of gender in ancient Mesopotamia and Jessica Keady examines masculinities in the Dead Sea Scrolls. Many more scholars of the centre have at some point published on gender, including the leader of the CSTT, Martti Nissinen. On the other hand, any research that deals with cultural objects left behind by ancient people is necessarily dealing with gender to some degree, as gender (just like social class) is generally a significant part of human societies.

Apart from the research themes that touch directly on gender, the CSTT is a scholarly community made up of people who are gendered. According to the website of the CSTT (as of June 15, 2017), the CSTT has 45 members, 23 women and 22 men. It is one of the largest research centres of its kind and in many ways aims at being at the forefront in questions of well-being and work-life balance in academia. Given that the experiences people have in life are often dependent on their gender, this aspect is relevant. Becoming aware of all dimensions of gender and the ways in which it may influence research is significant.

We invited four colleagues to react to these topics during a panel we organized at the CSTT annual meeting. We wanted to have a representative from each of the four teams, as well as gender balance among the presenters. In the end, we had four short (ca. 15 minutes) talks. The talks took two different approaches to our theme. Three of them focused on methodological reflection and one was more of a personal reflection on gender and academia.

The three papers all addressed methodological questions pertaining to their respective fields of study and gender. Francis Borchard talked about “A Gender Theory Critique of Historical Criticism”, Rick Bonnie’s title was “(Engendering) Changing Traditions in Archaeology – Past and Present,” and Saana Svärd gave a paper on the topic “Gender and Methodology in Assyriology.” Meanwhile, Anneli Aejmelaeus’ talk, “Stories from Real Life,” shared with the participants the gendered experiences and observations she has had during her career across three countries and several decades. This divide in the themes reflects one of the most difficult issues related to gender. People have great difficulties in talking about their experiences and possible issues when their own careers are at stake. If a gender identity – whatever it is – contains a possible threat to an established way of doing things, talking about it does not always provide an answer but may lead to further stigmatization. It is especially hard for young scholars to talk about gender-related questions in academia. We are thus very grateful to Anneli Aejmelaeus for agreeing to share her thoughts with a broader audience.

The short papers were followed by a vivid conversation among CSTT members and some reflections by our guests Eva Mroczek and Seth Sanders.  They reacted in particular to the “lived aspect” of gender equality in scholarship. They pointed out how academia still somehow favors men. For instance, it is not unusual to see all male panels (or “manels”) being organized even in those subfields where gender balance is, generally speaking, quite good. Seth Sanders encouraged the participants of the workshop to consider in the future whether they want to contribute to the situation by participating in all male panels and advocated attempts to generate change by actively challenging such frameworks. Finally, the respondents pointed out another form of imbalance that occurs in academic meetings, that of sexual harassment. For instance, at the SBL annual meeting, the existence of sexual harassment has been recognized in past years and an informal group called “SBAllies” provides support for members experiencing or witnessing such instances. SBAllies can be contacted via the following website: https://sballies.wordpress.com.

We are very happy for the opportunity to present the papers of our panel in the CSTT blog this summer. The first of the four papers offered is that of Francis Borchard, the others will follow during summer weeks.  Let the conversations about this important scholarship continue!