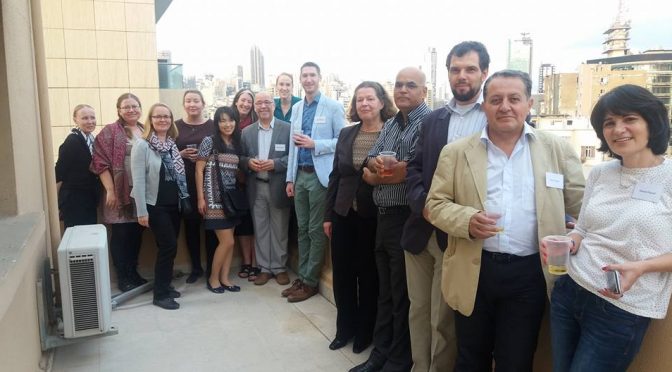 Laura Wickström works as coordinator at FIME’s office in Beirut October 2015 – November 2016. She is a doctoral student at Åbo Akademi University and holds a Master of Arts degree in comparative religion and currently specializes in Islam and ecology within the Department of Comparative Religion.

The conference Religion and Empire in the First Millennium BCE Levant took place in Beirut, Lebanon, in October 2016. The three-day conference with excursions was jointly organized by the Academy of Finland Centre of Excellence in “Changes in Sacred Texts and Traditions” at the University of Helsinki (CSTT), the Finnish Institute in the Middle East (FIME), and the Department of History and Archaeology at the American University of Beirut (AUB). END_OF_DOCUMENT_TOKEN_TO_BE_REPLACED

Several CSTT members participated in the Third Colloquium of the Finnish Institute in the Middle East (FIME), titled ”Concord, Conflict and Co-existence: Religion and Society in the Middle East and North Africa,” 5–7 June, 2014 in Turku, Finland. END_OF_DOCUMENT_TOKEN_TO_BE_REPLACED

Erbil is the capital of the autonomous region of Iraqi Kurdistan. In the sources of antiquity, it is known as Arbela or Arbail, and it was one of the principal cities of Assyria in the Neo-Assyrian period. What remains of the ancient city is now buried inside the huge citadel in the heart of the city, under the Citadel Town, dating from the 18th-20th centuries CE and currently being renovated to be a UNESCO world heritage site.  END_OF_DOCUMENT_TOKEN_TO_BE_REPLACED