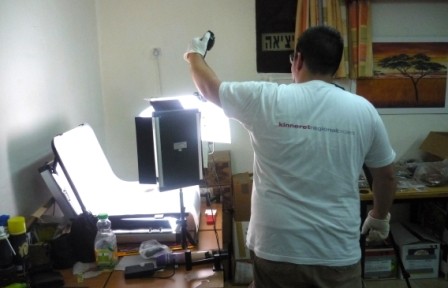 In part two of our writings on the 2014-study season at Horvat Kur, we will go into more detail on the different tasks of the team that is working in the lab. Our team consists for a large part of specialists working on different types of material. The numismatist Patrick Wyssmann (University of Bern) examines, for instance, the more than one thousand coins that were found in previous years of excavations in and around the synagogue structure. Most of the coins are small bronze ones that were all still unreadable at the time when they were found in the field. Afterwards, they have been chemically cleaned in a laboratory. Patrick’s task was to analyze, describe and register each of these coins, after which they were photographed by Benjamin de Groot (see Photo 1).

Philip Bes examines the ceramic fragments that were discovered in critical spots in, around and beneath the synagogue structure (see Photo 2). During the excavation seasons, the pottery was first washed and then preliminarily analyzed during the so-called ‘field reading.’ However, during this study season, it is the ceramic expert’s task to examine and to describe this material in more detail. During the 2013-season, Philip focused on the pottery found in a domestic quarter at the site that was partially excavated in 2010. The first analysis of this material has shown that little of the pottery in the domestic area pre-dates the fourth century CE while the main occupation phase at the site ranges from the late fourth to the late sixth and seventh centuries CE, which is in line with the much smaller amount of pottery and coins found in the synagogue area. This year, Philip focuses on an examination of the ceramic material that comes from spots in, around and beneath the synagogue structure. In the end, the analysis and dating of the ceramics and coins are important for the dating of the different construction phases of the synagogue and of associated structures, as well as for understanding better the nature of the different habitation phases on the site (see Photo 3).

Other expert members in our team include the architect Annalize Rheeder, who analyzes the building’s layout and the construction phases of the synagogue. Before the study season, Annalize already drew an overall stone-by-stone plan of the building which helps the members of the team at the moment to get a clearer picture of the architecture and to discuss the problems related to the original foundation and later refurbishments of the building. Thanks to Annalize’s study of the architecture, it has become clear that there are clear signs that the building went through several smaller or larger restorations before it was finally abandoned during the eighth century CE. The team is right now thinking about different possibilities for the phases the building went through. One of the aims of the study season is that the members can sit together and are able to freely brainstorm on these matters.

Other members of the team focus on understanding the sratigraphy of the synagogue  area (Rick Bonnie, Raimo Hakola, Byron McCane, Tine Rassalle), or examine the various architectural features found on the site in relation to the architecture of the synagogue (Ulla Tervahauta). In addition to the research focusing on Horvat Kur, some members of the team continue the analysis and the restoration of the finds from Tel Kinrot (Stefan Münger, Myriam Röthlisberger, Lise den Hertog, Irina Gutman) (see Photo 4). Anneke Berkheij-Dol is responsible for the registration of the finds, Christa Lennert prepares the drawings of the finds, and Damian Kessi helps the project with the locus plans and 3D-models of both Tel Kinrot and Horvat Kur.

The information collected during the previous seasons is stored in the database specially designed for the project by Stefan Münger. The members of the project may access the database from their home institutions, which makes it possible to carry on the analysis of the finds and findings when each member has returned home.

In the end, the Horvat Kur 2014-study season has given us the chance to critically reflect on the finds and findings from the synagogue area and has enabled us to take a first step with regard to the publication of a final report. Yet, also new issues sprang up which necessitate further excavation at certain spots in and around the synagogue during the summer of 2015. However, for the time being, to stay up-to-date about the findings of the Kinneret Regional Project, please check our website and ‘like’ our official Facebook-page.