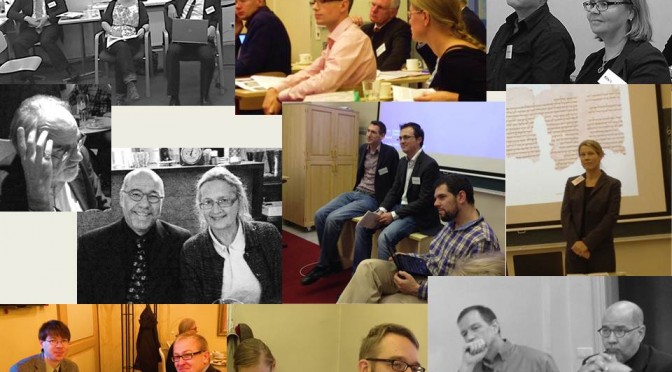 Forty people, virtually the entire CSTT, met for its very first Annual Meeting in Tallinn, Estonia during the first weekend of October. The topic of the meeting was What is Sacred? Sacred Texts, Traditions, Scrolls, Space, People, Polities.

The theme was approached from several angles both by the invited key note speakers, and the post-doctoral researchers of the CSTT. In addition, there were two sessions, in which the PhD candidates of the CSTT had the opportunity to present their work, and to search for the links of their individual projects to the main topic of the conference. The key note lectures discussed and questioned different aspects of the sacred. The speakers and their topics were the following:

Furthermore, in this meeting, in addition to the lectures and short papers, we tried a different way of working and thinking together. In the post-doctoral workshop, short presentations were given by Drew Longacre, Jason Silverman, Rick Bonnie, and Mika Pajunen. These papers were then discussed and brainstormed by a group consisting of both junior and senior scholars, using a “fish tank”-method. The following discussion was inspiring and challenged both the individual presenters and the whole of CSTT to stretch their minds, but also revealed the difficulties of shared knowledge construction and the need for at least some kind of common language.

The meeting concluded with feedback from the members of the Scientific Advisory Board, Professors Kristin De Troyer and George Brooke. The CSTT was encouraged to address and think more explicitly about the issues of diversity in the research community, and the tension between the individual, specialist’s projects and their relationship to the larger questions. Professor De Troyer reminded us also of the important question of possible competition inside a research community, an issue that needs to be acknowledged and addressed. Professor Brooke prompted the CSTT to think beyond the WHAT?-question and to move the field forward by answering the WHY?-questions. The uniqueness of the opportunity given to the CSTT and its members to think big and to think together was emphasized by both advisers. This was repeated on Monday 6th October, in the meeting of the Scientific Advisory Board, the executive board of the CSTT, and the representatives of the Academy of Finland, University of Helsinki, and the Faculty of Theology.

What emerged from this first annual meeting was the sense of an invigorating research community. Clearly, creating a real community with the most favorable circumstances for collaborative knowledge construction is not without problems that need to be solved. Regardless of the challenges, the CSTT gives its members a chance to be energized and inspired, sets the individual projects in a larger framework, thus providing them with added significance, and offers a platform for debate and dialogue. The purpose of the CSTT is to help its members to expand their thinking beyond the confines of each sub-discipline of biblical and cognate studies. It is simply exhilarating!