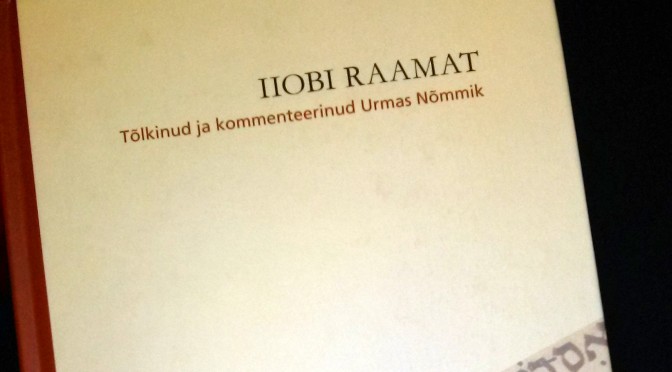 I already got a research job in Helsinki, at the CSTT. But is that all? No, in another sense I am still looking for Job …

Research on the book of Job can be a risky business – one can be stuck there for decades. I have been more or less dealing with Job since the mid-1990s. The book of Job is fascinating because of its highly complex theological-philosophical-existential content, and because of its complex philological and textual history. Hence, there is no end in sight to the study of the book of Job. One has still to look for Job.

In addition to my research on Psalms literature, the motif history of the earliest layers in the patriarchal narratives, and the (diachronic) poetology of ancient Hebrew literature, the book of Job has been somehow always in the centre for me. In my first academic study at the University of Tartu I discussed the handling of Elihu’s speeches by the Estonian Old Testament theologian and poet Uku Masing. I focused my doctoral research at the Philipps-University Marburg on the speeches of Job’s three friends, from form critical and redaction critical perspective (published as BZAW 410). Furthermore, a year ago my translation of Job into Estonian together with commentaries was published in the series “Piibel kontekstis” (“Bible in Context”, University of Tartu Press). The book includes also the first draft of a redaction critical model I have developed through fifteen years of research.

And now, in the framework of the CoE “Changes in Sacred Texts and Traditions”, and particularly as a member of Juha Pakkala’s team 3 “Literary Criticism in the Light of Documented Evidence”, I intend to work on the Hebrew and Greek texts of the book of Job. This includes a six-month stay in Helsinki until the end of June, and I feel honoured to directly participate in this outstanding research community.

To briefly understand my research topic, two basic premises have to be realized. One is the changing state of research on the literary history of the book of Job since 1990s, especially beginning with Markus Witte’s dissertation (BZAW 230). Even if major factions of the scholarly world have not noticed – yet – the meaning of this change, we possess basic premises for a redaction critical model which must be taken seriously within research on Job. This model demands a “proof-reading” from many perspectives. One of those is text critical, i.e., the second premise for my research question is the numerous unsolved text critical issues in Job, particularly the relationship of its Hebrew and Greek texts. This is far more complex than a mere suggestion that the textual reduction in the Greek translation can provide.

It goes without saying that the overall question of team 3 will be reflected in my research. E.g., the literary critics find it seductive to consider three famous instances of longer gaps in the Greek Job as evidence for secondary additions. But is it methodologically sound? On the one hand, can it be proved by other examples of assumed extrapolations in the Hebrew Job, if the Greek text does not attest any gap? On the other hand, can the pluses in Greek Job only be explained as deliberate additions of the translators? The methodology can be further improved if we consider also the form critical issues, e.g., how does the Greek text handle parallelism or the feature of keywords which both are well attested in the Hebrew Job, and presumably differently in different literary layers? There is enough material to study in the next years.