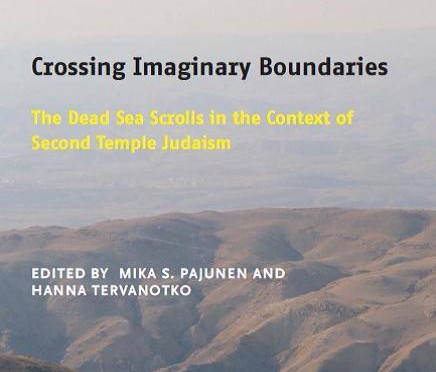 Fresh from the printers! A new publication by the Finnish Exegetical Society, which is edited by two members of the CSTT, has just been released:

“Finnish scholars have been involved in the study of the Dead Sea Scrolls in ever growing numbers since the 1950s. This volume pays tribute to this Helsinki school of Qumran studies, which is presently one of the largest in the world, by presenting the work of the Finnish scholars currently active in this field of study. The contributions of Crossing Imaginary Boundaries explore the Dead Sea Scrolls within the broader context of Second Temple Judaism. The volume challenges the reader to rethink critically the categories and interdisciplinary borders currently used in the study of ancient Jewish texts. In particular, Qumran research has frequently been seen as a limited esoteric area closed off from other areas of Biblical studies. This collection is an attempt to question and bridge some of these imaginary boundaries between scholarly disciplines and to demonstrate the importance of crossing them in order to get a fuller understanding of all these ancient texts and their underlying social phenomena.”

The volume can soon be ordered via the bookstore of the Federation of the Finnish Learned Societies. For more information on this and other publications by the Finnish Exegetical Society visit their website.

By the way… did we mention that the Annual Symposium of the Finnish Exegetical Society will be held tomorrow in Helsinki? The theme is “Bible and Magic”.