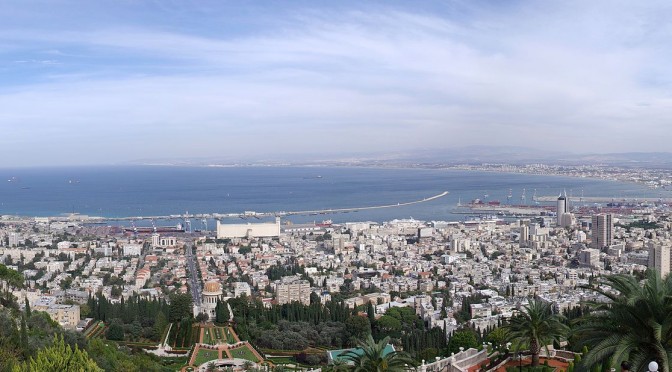 Three members of the CSTT participated in a conference “Terracottas in the Mediterranean through Time”, held at the University of Haifa, Israel 23-26 March 2015.

The conference was organized by Adi Erlich (University of Haifa) under the auspices of the Zinman Institute of Archaeology, Faculty of Humanities, School of History, Department of Art History all at the University of Haifa, and the Association for Coroplastic Studies (ACoSt, an association mainly focused on Mediterranean terracotta figurines, c. 1500 BCE–200 CE). The scientific committee consisted of Jaimee Uhlenbrock (President of ACoSt), Sonia Klinger (University of Haifa) and Tallay Ornan (Hebrew University of Jerusalem).

The conference aimed to bring together scholars and students who tackle the same issues as they study clay figurines and related objects from different periods and parts of the Mediterranean region. Many contributors dealt with Greece, Italy, or the Levant, but also Mesopotamia, Egypt and the Crimea served as topics. Invited scholars included several renowned scholars from all over the world; mostly archaeologists, but addressing also related fields bringing anthropological, art historical, gender and other perspectives

The scope of issues discussed at the conference was wide and followed the different stages of the terracottas’ lives:

First stage – the artisans or coroplasts: aspects of manufacture; typology and iconography; production of large and small-scale terracottas (mainly different sizes of figurines but also anatomical models, masks, ossuaries, etc.); social status of the artisans; organization of workshops; questions of specialization; relationships with other media and workshops; new technologies employed in the dating and identification of workshops.

Third stage – the users: Who used terracottas and who did not; how they were used and in what circumstances; usage through space and time; other objects used together with terracottas; themes and types in specific contexts (sacred, funeral and domestic); choice of types; symbolic meaning conveyed by terracottas; the role of terracottas in society; terracottas and gender.

Fourth stage – phasing out: How, why and when terracottas went out of use; patterns of deposition or obliteration; archaeological context of terracottas and its meaning.

The program was divided into several sessions, each approaching the main topic from a different angle:

On Monday, after a short introduction to figurine studies from the 17th century onwards by Jaimee Uhlenbrock, the first session was devoted to the Deconstructed Body: Heads, Protomai and Hands; the second and third to terracottas in sanctuaries and the fourth to types, meaning and context.

On Tuesday the sessions dealt with technique, production and artisans and in the afternoon almost everyone left for an excursion to Caesarea; the Helsinki delegation reclined to the Hecht museum (and library). The Wednesday program brought the themes terracottas and gender, terracottas of the Late Bronze and Iron Age in the southern Levant, between Koine and the Regional and interpreting terracottas in the Greco-Roman Near East and Egypt.

On Wednesday Raz Kletter gave a lecture titled “Who Used the Judean Pillar Figurines?”, elaborating on the issue how little we know about how the Judean Pillar Figurines (JPF) were used. Many researchers, by assuming women were the users of these figurines, tie the JPFs to the household, the domestic sphere, family religion, fertility and the like. In his lecture Raz argued that this view is stereotypical and not based on the figurines themselves – but rather on underlying assumptions about Canaanite “fertility cult” as something opposed to “Israelite religion”. He suggested that the figurines had more than one audience: they were used by and owned by both women and men in the world of mortals, while in the divine world they could address Yahweh.

In the concluding remarks it was noted that production and use of terracottas were the main themes underlying the lectures given during the conference. While the context of graves was nearly missing; houses and shrines were more prominently featured. There is a new focus on research, shifting from iconography to archaeological aspects and to the study of fragments. How do figurines relate to people’s feelings and behavior? In the future scholars may take a closer look at what is found with terracottas and how they function in certain contexts. Current figurine studies mostly look at certain segments of their life; maybe it’s time to look at terracottas with other finds and context.