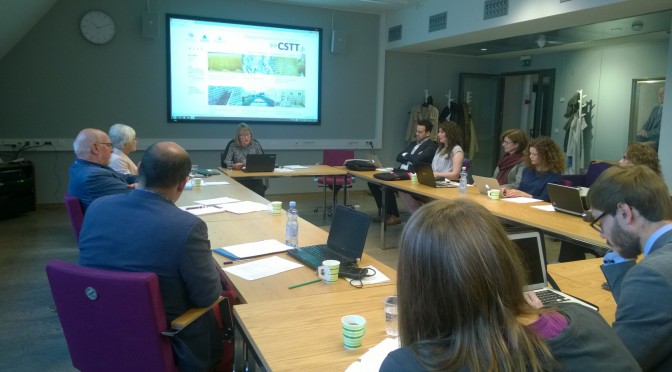 By Katri Antin and Jutta Jokiranta

A group of approximately twenty Dead Sea Scrolls scholars from several European institutions gathered in warm autumn weather in Helsinki on 14-15 September 2015 to share research and form new networks, also among MA and PhD students. The field of Qumran studies is moving into many new directions. Scholars need each other, and the small workshop format facilitated interaction and collective construction of knowledge.

What was also clearly visible in the meeting was the desire to study the Scrolls in their wider Hellenistic and Roman context, and the need to study anew some long-held views. Mladen Popović (Groningen) set out to revisit the sobriquet Kittim in the Roman Judaean context. Hellenistic comparisons were pushed forward by Bärry Hartog (Leuven) and Hugo Antonissen. Charlotte Hempel (Birmingham) used a sociological model to explore the knowledge economy in the Qumran Movement. Cecilia Wassén (Uppsala) compared male and female impurities and challenged the often-claimed oppression on women. Jutta Jokiranta (Helsinki) organized a workshop on the scribal marks in the Pesher Habakkuk, and enthusiastic scholars were happy to spend the time analyzing the meaning of two dots in column 7.

PhD students brought topical themes into discussion: Tupá Guerra Guimaraes da Silva (Birmingham) studies demonology in the DSS and asked how beliefs in malevolent influences might also be identified intertextually. Jessi Orpana (Helsinki) reviewed the debates on the categories of textual transmission and promoted the quest for creating more complex models of transmission. Hanna Vanonen (Helsinki) asked how the ancient people and modern scholars might think about manuscripts by presenting the war text material from Qumran, and supported looser categories, rather than strict ones, to do justice to the material.

Workshopping means several things. What it meant in this meeting is at least that we are there to support and challenge each other to think in new ways and that scholarship simply is more fun when done together.

The meeting was a continuation to earlier meetings held in Groningen (2013) and Göttingen (2014), and is planned to be held in Uppsala in 2017.