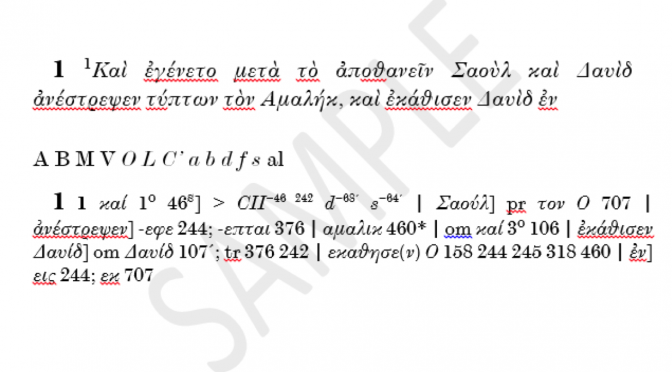 After King Saul has lost in a war with the Philistines, David becomes the king of the tribe of Judah and later of the entire Israel. He makes Jerusalem the capital of the kingdom. Through the words of Prophet Nathan he receives Yahweh’s promise of an eternal kingdom. He wins several wars and expands his kingdom to comprise much of the Southern Levant.

At the top of his reign things start to go wrong. David commits adultery with Bathsheba and arranges the death of her husband Uriah, one of his officers. Prophet Nathan comes to him with a story of a rich man who took and slaughtered a poor man’s little ewe lamb. The angry David promptly pronounces a judgment: “As the Lord lives, the man who has done this deserves to die!” But Nathan responds to him: “You are the man!” Despite David’s repentance, Bathsheba’s child dies.

Troubles arise in David’s household: his son Amnon sexually abuses his half-sister Tamar. David cannot make himself to punish his son properly, and Tamar’s full brother Absalom kills Amnon. Again, David fails to put things in order, and Absalom starts plotting against his weak father. In one of the saddest scenes in Hebrew history writing we see a weeping David fleeing from Jerusalem his head covered and walking barefoot. “If I find favor in the eyes of the Lord, he will bring me back … But if he says, ‘I take no pleasure in you,’ here I am, let him do to me what seems good to him.”

Ultimately, the conflict is resolved on a battlefield where David’s troops prevail. Absalom gets killed in the aftermath and the sad father cannot rejoice in the victory. A rift starts to grow between the Southern and Northern parts of the kingdom and rebellions arise. During a famine David agrees to a harsh execution of seven of Saul’s male offspring to compensate a blood-guilt. In a strange scene near the end of David’s reign Yahweh incites David to execute a census of the people which, as it turns out, is a great sin. Yahweh allows David to choose between three punishments, one of them involving only him personally, but as he is vague in his answer pestilence strikes the land killing seventy thousand. Yahweh has already relented before David has the strength to pray for the people: “I alone have sinned; but these sheep, what have they done?”

The Hebrew and Greek 2 Samuel

All these things concerning King David we can read in the Second Book of Samuel. Its Hebrew text has been preserved to us in a tolerably good condition. It is not perfect, however, and the modern translators occasionally have to rely on the ancient translations of the book. The oldest of these ancient translations is the Greek one, commonly called the Septuagint. The translation was probably made by Greek-speaking Jews in Alexandria in the second century BCE.

The Hebrew text the Greek translators used was slightly different from the one that has been preserved in the Hebrew Bible. To be sure, most differences in the text concern details of the stories: unlike in the case of 1 Samuel and the Books of Kings, major differences between the Hebrew and Greek 2 Samuel are few. Nevertheless, some of these differing details are by no means unimportant. It appears that the Hebrew text continued to change somewhat after the translation was made: learned circles interested in the ideological and theological nuances of the text introduced minor changes that aimed at promoting the better side of David and Yahweh’s fidelity to his promise of the eternal kingship. These small late changes can be recognized with the help of the Septuagint.

The problem of using the Septuagint in order to improve the Hebrew text lies in the fact that we do not know what the original wording of the Septuagint was exactly. There are about 60 manuscripts containing the Greek 2 Samuel, but none of them preserves the original text word for word. Some manuscripts have suffered from numerous copying errors, others have a text that has been consciously edited either to correspond better to the later Hebrew text or to fill the requirements of good Greek style.

The only way to see the original Greek text underneath the manuscript transmission is to compare the readings in the manuscripts and try to choose the best reading in each instance. This work is called textual criticism. The ultimate aim of this work is to produce a critical edition of a book. The Septuagint is edited critically in a hundred-year project by the Septuaginta-Unternehmen of the Göttingen Academy of Sciences. I have recently been appointed as the editor of 2 Samuel in this project.

The editing begins by collecting the readings of the ca. 60 Greek manuscripts into a database. Once this is done, the computer arranges the data into an apparatus which lists the deviations from the critical text in a concise and logical form. Admittedly, a Göttingen Septuagint apparatus is not the easiest thing to read, but good aids for reading are available.

The next step is to integrate into the apparatus all noteworthy readings from secondary sources, that is, witnesses that are something else than Greek manuscripts. These include ancient versions of the Septuagint into Latin, Coptic, Ethiopic, Syriac, Armenian, and Georgian. Cooperation with experts in those languages is needed. In addition, there are quotations from 2 Samuel in the writings of Early Christian authors, such as John Chrysostom and Basil the Great. Finally, the remains of Origen’s Hexapla are gathered into a separate apparatus. That task involves cooperation with the Hexapla Project.

Will It Ever Be Ready?

When the edition is published, hopefully by 2022, it should supersede all previous Septuagint editions for 2 Samuel: every important piece of information about the textual transmission should be included in that single volume. The project includes a companion volume describing the textual history of the Septuagint of 2 Samuel and justifying the critical decisions for the most important readings.

I have a group of brilliant scholars to carry out the project with me. We are looking for input from anyone who is interested in the research of the Second Book of Samuel or textual criticism of the Septuagint in general.