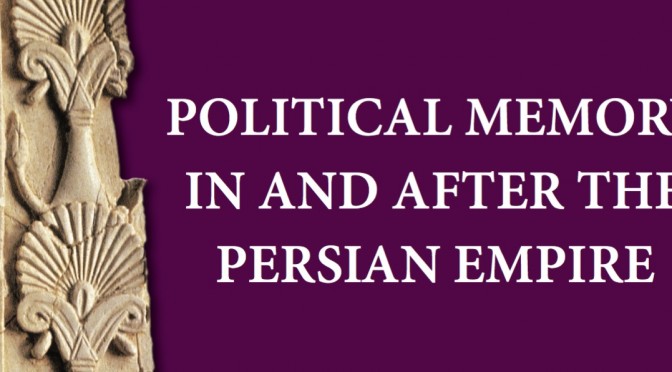 The below is a brief introduction to the new edited volume Political Memory in and after the Persian Empire (Jason M. Silverman and Caroline Waerzeggers, eds; ANEM 13; Atlanta: SBL, 2015). The volume is open access and freely available for download at SBL Publications. To download the volume, click here. To order a paper- or hardback copy, click here.

At its height, the Persian Empire (c. 550–330 BCE) stretched from India to Libya, Armenia to Arabia, uniting the entire Near East under the rule of a single Great King for the first time in history. Many of Persia’s subject areas had known long-lived traditions of indigenous kingship, but these were either abolished or adapted in order to fit the new frame of universal Persian rule. The ways people in the ancient Near East interacted with kingship in the Persian Empire were more diverse and carried more implications than just basic political stances of allegiance or rebellion. Indeed, how they remembered and reshaped their own indigenous traditions in response to these experiences are important. This is a topic of relevance for Rome, Egypt, Babylonia, Israel, and Iran, and periods from the Empire itself until the post-Seleucid era.

Kingship is as much cultural and social as it is political. In practical terms this means any interactions between rulers and the ruled must always negotiate historical and cultural legacies as much as expediencies of realpolitik. It follows from this that any assessment of the impact of a political system—in this case that of the Persian kings—requires both an understanding of previous systems and the resulting legacy among subsequent systems. One way to provide a framework for these questions around Persian kingship is the anthropological concept of political memory. The idea of collective memory as a sociological concept is often credited to Halbwachs (1992), who closely linked group identity and collective memory. More modern approaches to collective memory, which Misztal (2003) has called “dynamics of memory” approaches, rather emphasize the complex interactions between historical events, power ideologies, and social values represented in memory. This means the past is indeed shaped by the needs of the present, but within the constraints of historical givens and a variety of social realities. For investigations into the Achaemenid Empire, therefore, social memory provides an angle to view long-term, dynamic interactions between the ancient cultures of the Ancient Near East and their Persian overlords. These are not restricted merely to issues of “ethnicity” or instrumental politics—both of course important—but to the shaping of social values and worldviews as well, both present politics and the sort of politics deemed possible. Moreover, Ricœur’s distinction (2004) between memories which are of singular events and those which are “paradigmatic” is particularly useful. The import of political memory is not restricted to the recollection of particular events remembered for changing what is deemed normal, but also the memory of the very concept of what is typical or normative. The issue is, in this context, not merely one of historical reconstructions of single events but how the past was used socially to shape society and its understanding of its past, in the past.

Since the Persian Empire encompassed such a large area, assessment of such questions requires the collaboration of scholars working in a number of different fields. In June 2014 around 30 scholars from a variety of fields gathered to discuss these issues in Leiden, and 17 essays plus a synthetic discussion are now available. As R. J. van der Spek notes in his overview of all these very different case studies, the immense variety in reactions to the Persians highlights the fact that ancient societies were as internally diverse—both synchronically and diachronically—as modern ones. Historians should not be fooled into thinking any cultural label (such as “Judaean”) would have had only one way of interacting with (or impact from) its experiences with Persian kingship.

Readers of the CSTT blog are probably most interested in the relevance of the empire for the Judaeans. Five scholars offer studies in this regard. Ian Douglas Wilson reads the competing visions of kingship within the Hebrew Bible within an Achaemenid context, and he argues that these represent at least three strands of thought vis-à-vis foreign (Persian) kings. For him, this is not a matter of schools, but of debates within a narrow set of Yehud elites. Christine Mitchell reads Chronicles’ depiction of kingship in the context of Darius I’s model of kingship as it is inscribed on the façade of his tomb. Positing a connection with Aramaic scribal training, Mitchell finds thematic and terminological affinities between the visions of kingship found in both, though the two visions are not identical. Lisbeth Fried compares the intermarriage ban in Ezra-Nehemiah with the Law of Pericles in Athens to argue the reasons were primarily fiscal, and were imposed by the Persians to maintain monetary control. Kiyan Foroutan objects to recent attempts to read Neh 2 as evidence concerning Zoroastrianism, and instead focuses on what it says about Judaean views on the Achaemenid kings. Jason M. Silverman argues that the development of Messianic expectations in later Second Temple Judaism reflects the influence of Persian ideas of kingship, rather than the ideology of the Iron Age monarchy. All of these studies argue that the experience and memory of kingship within the Persian Empire did indeed have important social and political effects upon the Judaeans, due in no small part to the complex re-evaluation of Israel and Judah’s past monarchies—a process which happened in dialogue with the Persian context.