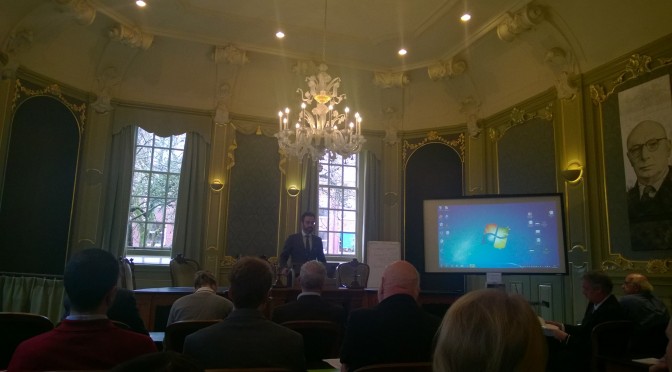 The Groningen–Leuven network of the Dead Sea Scrolls was established in 2012 as an open and informal forum primarily for the scholars of the universities of Groningen and Leuven, to get together frequently to discuss their ongoing work and current developments in the field of the Qumran studies. Soon after the first meeting the gatherings also attracted other colleagues’ attention and we have been happy to welcome numerous visitors. This year, for the first time, we published a call for papers, and about 30 people from all over the world joined to explore the theme of our meeting, “Dead Sea Scrolls and Hellenism.” Instead of offering you a detailed conference report (you can find the conference program online here), I will share with you my concluding remarks from this meeting hoping they will stimulate some further thoughts on how our views on the Scrolls and Qumran change when we study them in their historical Hellenistic context.

The early Christian author Tertullian, who lived in the 2nd and 3rd centuries C.E., famously asked, “what has Athens to do with Jerusalem?”, meaning what was the connection between Greek thought and philosophy and the traditions preserved in the Biblical texts. This view, expressed for the first time already centuries ago, has remained surprisingly prevalent in our academic research traditions. While the ancient Jewish texts have been put in dialogue with, for instance, Ancient Near Eastern studies for decades, Greek and Classical studies and studies on the early Jewish texts, have been conducted separately. Given this background and the almost total lack of examination of their connections, it is only logical that we are finally discussing those Jewish texts that were composed in the latter part of the Second Temple era in their own historical context, i.e., the Hellenistic one. I am particularly happy (and proud) that it is our own Groningen–Leuven network that has offered one of the first forums for such a new exploration of the Scrolls. I’m extremely pleased with this meeting, the work we have done together, and the new openings, leads and approaches which have been discussed in the most collaborative, open, supportive and forward-moving spirit. I want to thank you all for that.

During these two days it has become very clear to me, while listening to all the papers and interventions, that we have difficulties in phrasing what exactly we mean when we talk about Hellenism. We have talked about this quite a bit, and recognize that scholars of the past – Elias Bickermann and Martin Hengel– and of today– John Collins and Benjamin Wright, who lead the workshops of our morning sessions – they all phrase Hellenism in their own terms. There is not one Hellenism but many Hellenisms. This critical remark and lack of definition does not concern only our field. It may be encouraging for us to note that also in the field of Classics, Hellenism is expressed in different ways. On the one hand “Hellenism” broadly refers to the historical period starting from the death of Alexander the Great and finishing in the wake of the Roman conquest of the eastern Mediterranean. On the other hand, it also refers to Greek cultural expansion and influence related to this period. In both uses (referring to the historical period or the cultural expansion), the consequences of Hellenization vary greatly. All in all, when we talk about Hellenism, it seems that we do not have one fixed definition in use or even a specific corpus of texts that we could refer to and say “this is Hellenism.” Instead, Hellenistic literature offers different perspectives on the phenomenon: Plato is very different from Aristotle and the authors who composed tragedies and comedies. Yet all their writings are expressions of Hellenism and their influence continued for a long time. For a comparison, let’s just think how differently Judaism is reflected in the texts of different (Hellenistic) authors: 4QMMT and 1-2 Maccabees or Instructions.

1.
Seeking to find a definition that would fit into our purpose in this meeting, and our discussions, many presenters described Hellenism as cultural interaction and hybridity within the Greek world and peoples in their papers. Such an approach to the texts indicates that they understand the Jewish texts composed in the Hellenistic era as indeed Hellenistic cultural products. However, when thinking about future scholarship I think it is important that we do not compare two abstract concepts, “Judaism” and “Hellenism” or even “Jewish” and “Greek” texts generally, but try to come up with more specific concepts we actually want to compare. We may want to try to find more exact subjects such as texts, genres, practices, examples of material culture, architecture, etc. In order to come up with more precise comparative studies, it is important we determine which aspects of Hellenism and Judaism we actually compare.

2.
When we do this methodological shift, i.e., move to talk about specific expressions of Hellenism instead of a broad concept, we are forced to step out of our comfort zone. Namely, we are no longer doing only Jewish studies or Biblical studies, or Hellenistic Studies, separately, as we have done in the past, but we are moving towards comparative religion. This move asks for a new tool kit. For me it has been helpful to think that the purpose of comparison is to look at similarities: do we see parallels? Do specific Jewish phenomena correspond with what we have on the Greek side? Moreover – and I think this became very clear this morning in our workshop exercise led by Ben Wright – it is equally important to look at the differences. When A does not correlate with B, can we distinguish how they differ from each other? What are the nuances that make the two different? What do they reveal to us about each author?

3.
Further, one of the aims of comparison is, according to Jonathan Z. Smith, to try to explain the results of the comparison. When we engage in a comparative study, we do not simply look for possible similarities and differences but our aim as scholars is to at least try to analyze what they tell us about the examined subjects, i.e., the ancient world. As we have seen during these two days, all parallels we find in Greek and Jewish texts do not automatically point to dependencies (literal or non-literal), but they may lead us to explore new typologies, common literary features, etc. In any case, our aim is to offer explanations for the results of our comparisons. Moreover, concerning parallels in texts of material culture, we have noticed that pinpointing specific dependencies, i.e., describing how the influence moved, is extremely difficult. Most of us are text scholars and asking such questions, for example, “did ancient author x know text y and if he or she did, how did they know it?” requires us to step outside our text world and to pose some further historical questions. We would need to know historical realities that are no longer accessible for us. For the rest of the time, most of the time actually, we only look at the ancient world (and here I use a metaphor introduced by Christoph Levin at the 2013 IOSOT meeting), as if through a keyhole, and we are, wisely, not willing to take wild guesses about what is happening on the other side. Let me just once more say that while I acknowledge the difficulties we have in explaining the various connections between the Jewish and Hellenistic cultures, and much will remain inaccessible to us, that is still the direction in which we should ultimately try to head.

Fundamentally, in all three points addressed above, I have suggested some further avenues for our investigations, what I talk about is methodological rigidity. In what follows, let me now turn to a more personal notion, some food for self-reflection.

4.
When in this conference we assessed past research on Hellenism, we made some critical remarks concerning the ideologies of past scholars. We are aware of their personal and historical agendas, and we openly asked to what extent those influenced their academic views and set their research programmes. It was a real pleasure to have Al Baumgarten, a student of Elias Bickerman, with us. Via Al’s personal memories of Bickerman and his scholarly work on his teacher, we got new insights into Bickerman’s thinking and the history of research. This leads me to ask what may be the present ideologies that influence our own thinking. Similar to earlier scholars, we are also children of our own time who don’t live in a vacuum, but are influenced by different driving forces such as globalization, just to mention one. We should at some point ask ourselves the critical question: is it possible that while we are trying to get to know the ancient world better, and especially the Dead Sea Scrolls, different ideas and influences of our own time push our own thinking in one direction or another? Being aware that despite our good will and attempts at objectivity we may have our blind spots, can be helpful.

In conclusion, let me go back to Tertullian’s question, “what has Athens to do with Jerusalem?” Tertullian made this remark with clear doubt–that perhaps the answer was, “nothing.” In contrast to his views, and those of many other generations, we have seen several evident parallels. With regards to the Dead Sea Scrolls and Hellenism, this meeting has been pioneering and has offered us some inspiring starting points for future research. Thank you all so much for your active participation.