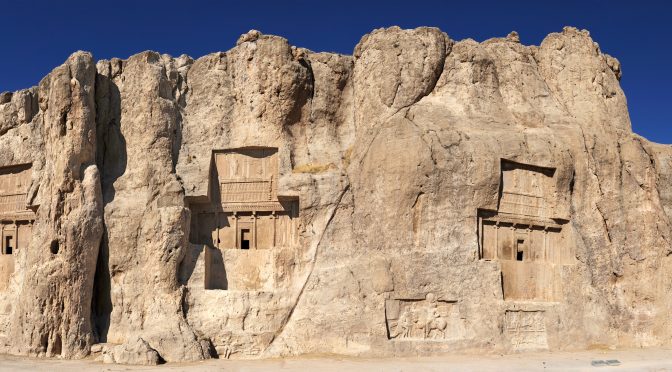 This post is a summary of the recently published article, Jason M. Silverman, “Achaemenid Creation and Second Isaiah” Journal of Persianate Studies 10.1 (2017): 26–48. In two years, it will also be available on my academia.edu-profile.

Second Isaiah (Isaiah 40–55) represents the one of the most sustained assertions of YHWH as creator in the Hebrew Bible. As a theme, creation periodically appears throughout Second Isaiah from 40:12 to 54:16, thus almost the entire span of the work. I argue that the manner in which this text uses the theme of creation is an instance of double influence: first, of deliberate, negative influence in relation to Babylonian creation, and second, of a deliberate (though perhaps subconscious), positive influence in relation to Achaemenid creation (Silverman 2010: 2–3, 6). To substantiate this claim, I will briefly describe creation as it appears in Second Isaiah, creation as it appears in the prologues to the Royal Old Persian inscriptions, contrast these with the wider Ancient Near Eastern Context, and argue for the significant of the Persian context. Thus instead of older arguments over “monotheism” and “dualism,” I argue that the locus for interaction is in the concept of creation.

Second Isaiah. Second Isaiah goes to great lengths to describe Yahweh as a Creator. It posits, discusses, or appeals to Yahweh as creator no less than 24 times. The text is not interested so much in the mechanics of creation as in the proofs concerning the nature and ways of YHWH which it can derive from it. Though the idea that YHWH is creator is repeatedly stated to be something which the audience already knew (e.g., 40:21, “Do you not know, Have you not heard…”), there is a clear sense of resistance amongst the implied audience. There are several important aspects to notice concerning the way Isaiah uses creation. It is posited as a defining feature of the sort of god Yahweh is (e.g., 42:5). It is tied to the justification of Yahweh’s “servant” (e.g., the same passage in 42). It is developed in contrast to martial creatorship of Marduk (e.g., 43:10). It is explicitly stated that Yahweh also creates good (45:7, 42:18).

The Old Persian Creation Prologues. A major component of the Persian kings’ ideology is creation, but the import of this for Persian period Judaeans has largely gone unnoticed within biblical scholarship—and, indeed, even little noticed within comparative religion in the Ancient Near East. Twenty-one Old Persian inscriptions begin with a creation prologue, ranging in date from Darius I (reigned 522–486, earliest prologue roughly 515 BCE) to the reign of Artaxerxes III (359–338 BCE). I have translated the prologue on Darius’s tomb (§§1–2) as follows:

I (am) Darius, great king
king of kings
king of peoples of all kinds
king in this earth, great and far-reaching
Son of Hystaspes, an Achaemenid, a Persian,
Son of a Persian, Aryan, of Aryan seed

The seemingly banal first two terms (earth, heaven) disguise some significant elements. A subtle distinction is made between four proper creative acts and the act which makes kingship. The change in verb subtly informs the audience of two things: first, Ahuramazda’s creation was beneficent: a primordial creation was “happiness of humankind.” Ahuramazda created a material world in which human happiness plays an integral part—not just for divine beings. Second, despite being listed in the same way as the previous four items—as an attribute of Ahuramazda—King Darius is an activity of a different order. Although clearly possessing a unique relationship with the creator god, Darius is not primordial; his rise to power is evidence of Ahuramazda’s continuing creative activity. Moreover, Ahuramazda’s creation is linked to the empire verbally, in using the parallel titles “Great God” and “Great King” and in the location of activity (earth). Of course, the overall import of the prologue is to establish Ahuramazda’s ability to make Darius king as well as to create a parallel between the earth and the empire.

Creation in Near Eastern Mythology. While no region has preserved a systematic cosmology (though there are several ‘narratives,’ especially Enūma Eliš and Hesiod’s Theogony) and the creator gods vary even by city, all offer interesting contrasts to the Achaemenid creation prologue. The common features one can note in the attested examples is that creation is typically a violent affair and thus is rarely if ever the work of a single deity. The nature of the plurality can vary between theogony and the carving up of primordial enemies, but this pattern holds true. Moreover, the creation of the cosmos would appear to be either something which just happened, or which the gods create for their own reasons. Humanity is either left unmentioned or is created for divine pleasure.

These common features offer a striking contrast with the Old Persian creation prologue. Ahuramazda is not part of a theogony or battle. He is not a young, martial deity. Particularly noticeable is the surprising anthropocentric nature of creation: only in the Achaemenid version is creation for humanity rather than humanity for the gods. From a comparative religious or mythological perspective, this observation is very significant. Something new is going on in the Achaemenid creation prologues.

Persian Influence on Creation. Though the manner in which Isaiah describes Yahweh has often been discussed in connection with Persia, the Old Persian creation prologues have not received their due recognition. What does it imply for the discourse in Isaiah? One can dispense at once with any simplistic notion of Judaean “conversion” to Iranian religion. Nor can it be seen as in polemical relation to the Persian religion. Nevertheless, the new context of being Persian rather than Babylonian subjects infuses the entire discourse of Second Isaiah.

In Isaiah, creation plays a key role. It serves as one of the prime aspects predicated of YHWH: he is a creator god more than a warrior or dynastic deity. This use of creation thus has three relevant contexts that must be considered to be simultaneously significant: older Judaean traditions of a conflictual creator, Babylonian traditions of Marduk as creator, and the Achaemenid creation prologues. With creation, Isaiah manages to select and adapt Judaean tradition in such a way that it not only provides a point of contrast with the surrounding Babylonian society—as often noted by scholars—but also in a way that is remarkably similar to imperial Persian presentations of the same. Unlike the general conflictual pattern whereby a younger, martial deity shapes the cosmos from an opponent, creation is predicated as an inherent aspect of Yahweh. This use of creation in Isaiah is remarkably similar to that in the Achaemenid creation prologue: not only makes creation a divine attribute, it is a positive thing, and it functions as a justification of YHWH’s servant. By so doing Isaiah has reformulated received tradition—indeed, something new.

The interpretative change in Isaiah’s use of creation is huge. Yahweh has started on a path of teleological creation. His purposes are no longer restricted to the local kingdoms which worship him, nor to response in the historical moment: he has created with a view to his servants. These servants—Yahwists and Great King—function in this context. Moreover, Yahweh is now attached to a beneficent understanding of reality and not just one predicated on superior power. He also has become a creator in a manner which Isaiah develops as a foil to Marduk but an implicitly comparable one to Ahuramazda. In light of this, it is reasonable to conclude that this is one of the earliest evidences of Iranian influence on the Judaeans, in the form of creation theology.