More information on programme and registration for the conference can be found here.

Professor Ilmari Soisalon-Soininen (1917–2002) is best known for his research on the syntax of the Septuagint, the ancient Greek translation of the Hebrew Bible. One of the distinct traits of the Septuagint is its nature as a translation from a Semitic language to an Indo-European one. Actually, many of the books included in the Septuagint have different translations whose style and degree of literalism vary greatly. The translators can be characterized by their choice of renderings in such Hebrew structures that can be rendered in many different ways in different contexts. Some of the translators of the Septuagint aimed at rendering a certain Hebrew grammatical structure by a fixed Greek structure as often as possible, sometimes producing unidiomatic Greek or an obscure meaning. Thus the syntax of the translation is partly governed by the source language. Soisalon-Soininen did pioneering work in taking this aspect fully into account by his translation-technical methodology. END_OF_DOCUMENT_TOKEN_TO_BE_REPLACED 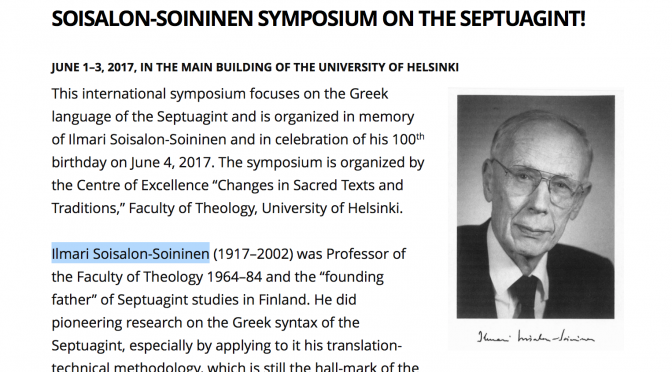 The international Soisalon-Soininen Symposium on the Septuagint focuses on the Greek language of the Septuagint and is organized in memory of Ilmari Soisalon-Soininen and in celebration of his 100th birthday on June 4, 2017. The symposium is organized by the Centre of Excellence “Changes in Sacred Texts and Traditions,” Faculty of Theology, University of Helsinki. END_OF_DOCUMENT_TOKEN_TO_BE_REPLACED 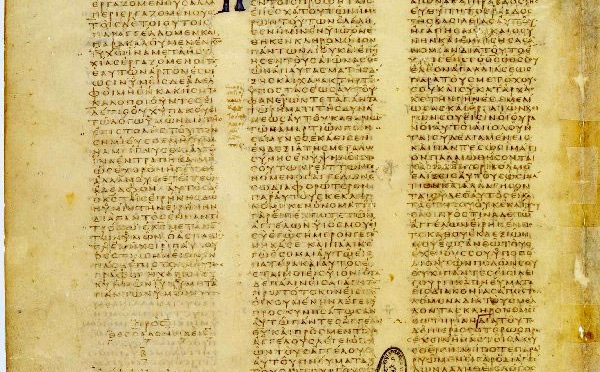 We are organizing a centennial symposium — Soisalon-Soininen Symposium on the Septuagint — in celebration of the occasion of the 100th anniversary of the birth of our esteemed teacher Professor Ilmari Soisalon-Soininen on 4th June, 2017. Professor Ilmari Soisalon-Soininen did pioneering research on the Septuagint syntax, applying what we call the translation technical method, and was the founding father of Septuagint studies in Finland. The symposium is organised by the courtesy of the Centre of Excellence in Changes in Sacred Texts and Traditions (CSTT) funded by the Academy of Finland. The symposium will take place 1-3 June 2017 at the University of Helsinki. The actual symposium will be followed by a small anniversary party on Sunday 4 June at noon.

JAN JOOSTEN, “Grammar and Style in the Septuagint: On Some Remarkable Uses of Preverbs.”

JAMES K. AITKEN, “Standard Language and the Place of the Septuagint within Koine.”

SILVIA LURAGHI and CHIARA ZANCHI, “New Meanings and Constructions of Prepositions in the Septuagint: a Comparison with Classical and New Testament Greek.”

JOHN A.L. LEE, “Back to the Question of Greek Idiom.”

THEO VAN DER LOUW, “The Dynamics of Segmentation in the Greek Pentateuch.”

RAIJA SOLLAMO, “The Usage of the Article with Nouns Defined by a Nominal Genitive.”

ANSSI VOITILA, “Middle Voice as Depiction of Subject’s Dominion in the Greek Pentateuch.”

We invite proposals for papers to be presented during this symposium. Slots of papers will be 30 minutes (20 minutes presentation, and 10 minutes discussion). The papers should relate to Septuagint syntax, Ilmari Soisalon-Soininen’s research on the topic and / or the Septuagint language as part of the broader development of the Greek language. We ask you to submit your paper proposals with the title and a short abstract not later than 31st October 2016. The papers accepted for presentation will be announced before the end of the year. The symposium webpage (https://blogs.helsinki.fi/soisalon-soininen-centennial) is now opened.

Paper proposals as well as inquiries concerning the symposium should be sent to Anssi Voitila by e-mail to anssi.voitila@uef.fi.