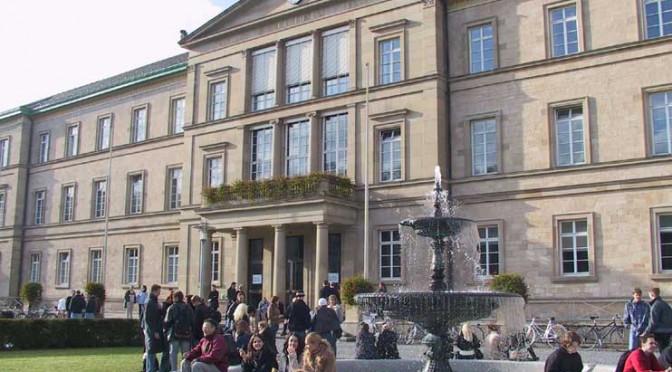 I have spent the academic year 2014/2015 in Tübingen, which is a small medieval academically-oriented town in Baden-Württemberg, Southern Germany. I chose Tübingen for several reasons. Firstly, I was fascinated by its traditional status: the university is founded in 1477 and thus it is one of the oldest universities in Europe. Tübingen has been historically central to theologians.

During the last centuries, several important paradigm shifts were established here. For example, the so-called jünger Tübinger Schule with its leading figure Ferdinand Christian Baur (1792–1860) can be identified as the birth of historical critical exegetics and modern Pauline studies. The approach of the school emphasized that each text was written in a certain historical and religious moment and thus the text cannot serve as an undistorted window to history. Later in the 20th century, when Martin Hengel was professor of Institut für antikes Judentum und hellenistische Religionsgeschichte in Tübingen, it became an important interlocutor with Anglophone Pauline research especially with the University of Durham where James D. G. Dunn made known the so-called New Perspective on Paul based on the ground-breaking studies of E. P. Sanders. Because Paul described his contemporary fellow Jews polemically, Paul’s letters were not anymore seen as reliable historical sources on ancient Judaism. Especially compared to other sources from the late Second Temple period (c. 200 BCE–70 CE), the picture of ancient Judaism differs crucially from Paul’s description. This view was neglected for centuries among Christian scholars.

Are these schools then visible in every-day practice at the campus area? Surprisingly, the New Perspective on Paul does not play such a big role anymore in Tübingen as it does in Helsinki. It seems to me that the emphasis is now more on the hermeneutic relevance of the ancient texts to each reader than on the historical relevance of these sources. I would say that it is vice versa in Helsinki: even if we have to admit that – after the linguistic turn – there is no straight access to the historical events through the literary sources, it is possible to gain historical information from these sources. Thus far, I have been sensing that in Tübingen the historical data serves rather as background information for hermeneutical analysis. I have found this a very stimulating aspect during my stay. And besides, I have reserved the best corner of the marvellous library Theologicum of the theological faculties – both catholic and protestant – from where Baur’s grave is in sight of me at the city’s cemetery that is located next to the hexagonal library building.

History was not the only reason to come to Tübingen. Since the topic of my dissertation is Paul’s use of the Septuagint Psalms in his Letters, the strong presence of Pauline studies at the Faculty of Protestant Theology was one of the most important reasons in favour of Tübingen. New Testament studies are divided into three chairs of which Paul and Pauline studies and New Testament Hermeneutics is chaired by Prof. Christof Landmesser, who is my contact person during the stay.

I was also intrigued by one interdisciplinary research training group in which also theology is involved with Prof. Landmesser. The group aims to study the phenomenon of ambiguity – uncertainty, vagueness and plurality of the meaning of an utterance – in language both on the level of every-day spoken language and on the level of written language in more complex literary products. The questions are how, on the one hand, communication is possible despite the vagueness of spoken and written language and, on the other hand, how ambiguity is employed intentionally and strategically in communication. What are the strategies of the writer/speaker and recipient? The group consists of linguists, literary theorists, specialists in classical and general rhetoric, classicists, psychologists, theologians and lawyers.

I was privileged to participate in the annual conference of the training group in Blaubeuren in February 2015. The topic of the conference was Ambiguity and Strategy. I discussed in my presentation how some Early Christian writers have interpreted one passage of Paul’s Letter to the Romans (Rom 1:26–27). These interpretations differ from each other and also our contemporary – albeit copious – views on the passage that has become topical to recent socio-ethical discussion of homosexuality. Paul, in my view, was more concerned of idolatry, whereas Clement of Alexandria’s interpretation of Paul’s passage (Peadagogus 2.10.86) condemned non-productive heterosexual acts. Similarly, Augustine interprets the passage as holding a non-homo-genital view, asserting that the actual sin Paul was describing was that men and women had abandoned “natural sexual relations” in order to beget children (Answer to the Pelagians II: Marriage and Desire 20.35). These examples show how ambiguity of language enables plurality of interpretation and how these interpretations can function as part of power politics in their historical context.

All in all, my experience in Tübingen has been extremely pleasant so far. Among other great things, I enjoy the abundance of possibilities both in the academic and the cultural field, the easiness to ask help from strangers whenever needed, and the remarkably beautiful medieval town surrounded by the nature of Southern Germany.