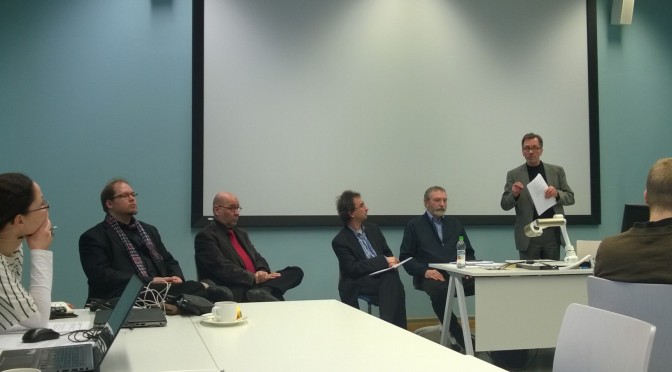 The cognitive turn in the study of the human mind emerged in academia already over fifty years ago. But how has it effected history of religions and biblical studies—or has it? And should it?

Many insights to these questions were provided in the meeting “Trends and Challenges in the Cognitive Science of Religion,” organized by CSTT and Risto Uro’s REECR-project, 3‒4 March, 2015 in Helsinki (see for the full programme here). The Cognitive Science of Religion (CSR) is a broad and developing field of study, so it was especially useful to hear two experts, coming from different backgrounds, to give their views on the “trends” and “challenges” in the field.

Prof. Armin W. Geertz (University of Aarhus) gave several arguments for why “textualistic” and “culturalistic” biblical studies should care about cognition. Biblical scholars have often been “mind blind”— yet they study thoughts, beliefs, feelings, and perceptions. No one can enter another person’s mind, it is true, but to be aware of the constraints, tendencies, and capacities of human cognition might be a good start.

So what is cognition? All animals have the ability to perceive, process, and use information from the environment. Cognition should, however, not be understood in terms of the old “computer-metaphor,” where data is entered into a computer and then processed by it. Rather, cognition is “embodied and embrained”: our brains make predictions about the environment all the time and then adjusts (or not) those predictions. Cognition is materialized and distributed and thus goes beyond an individual’s brain.

Geertz even claims that cognition is deeply cultural: culture is an enormous “cognitive web” that defines and constrains the knowledge, memories, and ideas of groups and individuals. Religion, then, is one “cognitive governance system”.

Now, the cognitive science of religion is both theory-driven and empirical. Biblical scholars might have a problem with both of these. Not only are biblical scholars unaccustomed to explicating their theoretical frameworks, but may feel uncomfortable in formulating hypotheses to be “tested”. Experiments with real human beings and results that contain measurements are not normally their (our!) cup of tea. Geertz provided no easy way out: Experimental results must be critically evaluated—too often the experiments are not replicated or the numbers of participants are too small, for example. Scientists need to keep on formulating scientific theories and revising them—and here historians and biblical scholars are needed, too.

István Czachesz (University of Heidelberg) helped to understand the field of CSR by dividing it into three areas of interest: why religion emerged in the first place and why it persists, how religion works, and how religion changes. Biblical scholars are not usually very interested in the first area (why religion emerged), and are hesitant to go into the last area (changes) if it deals with big questions and large time spans. Historians of religion are perhaps most at home in the questions about how religion works, but they are normally interested in the details and particularities, not universals or great patterns. Czachesz pointed out that the history of religions (and biblical studies, too) has an important social function in the humanities: it provides material to negotiate contemporary values, meanings, and norms.

Czachesz suggested that whereas changes in religion are often explained by external factors and reactions to those factors, CSR provides a means to understand changes from the perspective of the internal structure of religious thought and behavior.

This does sound somehow relevant to what CSTT is doing, doesn’t it?