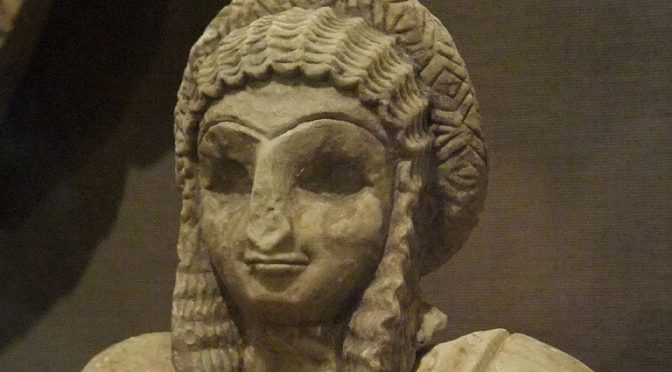 Because of the format of a blog post, I have summarized passages and deleted citations and footnotes. For the full form of the text with appropriate references and bibliography the reader is invited to consult: Saana Svärd: “Studying Gender: A Case Study of Female Administrators in Neo-Assyrian Palaces” In: Brigitte Lion & Cécile Michel (eds.), The Role of Women in Work and Society in the Ancient Near East. Studies in Ancient Near Eastern Records (SANER) 13. Walter de Gruyter, Boston. 2016, pp. 447-458.

Although Mesopotamian women have been an object of study for more than a hundred years, most early publications treated women as an isolated category. “General” history was male history where exceptional women occasionally intruded. In most of these studies the position of women was seen from an ethnocentric Western perspective.

Ethnocentric and androcentric studies on women were challenged when studies relating to gender emerged in the 1960s. The different approaches that developed under this rather large rubric can be described as “waves” of scholarship. These waves are more methodological than chronological, but the birth of the first wave is usually placed in the 1960s.

In a nutshell, the aim of this first wave was to write women “into” history. In historical research, the endeavors of men had been the most important object of study and this is what the first wave set out to change. Assyriology was mostly oblivious to these developments. Nonetheless, the 33rd Rencontre Assyriologique Internationale (1986) in Paris had “women” as its theme.

After the 33rd RAI, the number of articles and books concerned with women or gender markedly increased. Here one should note, however, that the field of Assyriology is not uniform. In the case of Neo-Assyrian studies, much of the textual evidence became widely available only during the 1980s and 1990s. Thus, the first wave of gender scholarship in the field of Neo-Assyrian studies appeared later.

The second wave of feminist scholarship began in the late 1970s. No longer content to merely write women into history, many scholars now concentrated on studying the subordinate status of the female gender. This was done from two interconnected perspectives. Some assumed that women were always and everywhere a universally oppressed group. Other scholars believed that matriarchy was the historical reality of the ancient world and that patriarchy developed only in the late prehistoric and early historic periods. This view, of course, concentrated a great deal of attention on the study of the ancient Near East, where written history began. The weakness inherent in both perspectives is the idea of a uniform entity of patriarchy, which can be applied to or assumed for all of the ancient Near East. Defined as male power, patriarchy is not an unproblematic framework for understanding gender, as it disregards other kinds of variables (age, class, specific location in time and place, etc.), Basically, the concept of patriarchy is like a blanket of snow across the vast geographical and chronological landscape of the ancient Near East, obstructing from view the myriad details and variations relating to gender.

One of the main achievements of the second wave was the development of the notion of gender, or the idea that biological sex is distinct from a socially constructed identity (gender). This influential idea was explicitly included in the title of the Helsinki Rencontre in 2001: “Sex and Gender in the Ancient Near East.” This RAI was a landmark similar to the 33rd RAI in Paris. Although the aims of the Helsinki RAI were not theoretically ambitious, it still marks the emergence of the second wave for Assyriology. Nonetheless, the impact of the second wave remained marginal. Although the number of books and articles steadily kept increasing, there are very few Assyriological studies that engage with oppression theory or matriarchy theory or use the strict dichotomy of sex/gender. One could argue that in many ways, gender studies in Assyriology skipped the second wave altogether. The first-wave project of writing women into history was accepted as a worthwhile research goal at the Paris RAI, if not earlier, but it seems that it took so long for the ideas of gender research to reach the Assyriological community that most scholars who were interested in the topic skipped the second wave and proceeded directly to using the more sophisticated methodology of the third wave.

The third wave of women studies began in the 1980s. Even more than the previous two waves, the third wave is a collection of manifold approaches, which are primarily connected to each other in their determination to deconstruct the basis of scientific knowledge production. Queer studies, masculinity studies, performativity, possible duality of gender structure and many other issues relating to the body and sexuality are all part of the third wave. The main point of agreement of the third wave relates to the nature of knowledge production. Instead of seeing the researcher as someone who is seeking to uncover the truth that is “out there,” they advocate the framing of research as a project for making sense of different phenomena. This includes the knowledge that defines normative gender roles and sexuality. When knowledge production is seen in this way, as production, the traditional dichotomies of research – male and female, sex and gender, matriarchy and patriarchy, public and private, power and oppression – become suspect and the question arises, are these useful categories for producing knowledge?

Some studies on ancient Mesopotamian women employ these views or partially engage with them. Many of these studies have used iconographical and/or archaeological evidence as their main source material. For text-based research, traditionally understood as the core area of Assyriology, studies that engage with third-wave ideas are few. Although the number of scholarly articles and books on gender in Mesopotamia has steadily increased, such research questions are still on the margins of Assyriological research.

All in all, the discipline is mostly marked by first-wave studies, namely writing women into the history of ancient Mesopotamia. This is, of course, absolutely necessary. At the same time, however, first-wave studies have a number of problematic aspects. Essentialism is certainly one of them. Pursuits that have been seen by researchers as “essentially female,” such as child-rearing or textile work, are often the focus of first-wave studies. For instance, child-rearing is an important topic of research, but researching child-rearing does not necessarily tell us anything about the construction of gender. Femininity and masculinity cannot be reduced to essentialist concepts, as masculinity and femininity are always cultural constructs. Therefore, cultural differences need to be properly acknowledged and grappled with.

Thus, for good reason, third-wave research has shifted its focus from the study of women to the study of gender systems. The dynamic relationships of gender systems as part of other cultural and social systems form a challenging and fruitful new area of research. A methodological emphasis on intersectionality is based on the idea that women cannot be studied alone, because gender is part of all social relations.

The problem of current research on Mesopotamian gender systems is twofold. On one hand, the naïve belief in objectivity in humanistic research has come to an end. On the other hand, modern methods and theories cannot be used indiscriminately on ancient material. Many of the more specifically third-wave approaches are not ideally suited for fragmentary Mesopotamian material.

A case in point is the work of Judith Butler, which is at the center of many third-wave approaches. In second-wave studies, it was common to find an essential difference between “sex” (traditionally seen as referring to biological bodies) and “gender” (the meaning attributed to these bodies by society). Consequently, Butler’s idea of gender as a repeated social performance and not as an expression of pre-existing identity was groundbreaking in many ways. It can be said to be the most significant contribution in recent decades of feminist studies. Butler’s work has its roots in philosophy and is certainly thought-provoking, but it is difficult to grasp how it can be fruitfully applied to the meager textual remains of Mesopotamia.

Personally, I have found the work of sociologists Candace West and Don Zimmerman to be more useful. In their now classic article “Doing Gender” (1987), West and Zimmerman write that “female” and “male” are not the binary, static, opposite categories that a rigid sex-gender division would imply. Rather, gender is “done” by individuals in social situations. It is portrayed through interaction, which produces it while at the same time naturalizing it. In a nutshell, it is a process that transpires in all forms of human interaction.

The idea that gender does not exist independently of the actions creating it is especially valuable for the study of Mesopotamian women. Assyriologists have few texts at their disposal that would describe Mesopotamian views on masculinity or femininity. However, the texts and artifacts that remain from Mesopotamian cultures all provide information on social interactions. Following West and Zimmerman, I suggest that all of these actions produced gender. Interactions between people convey much more than just gender as well. On the basis of principles of intersectionality, it follows that by analyzing more closely the interactions between individuals we may gain a better understanding of the interplay of gender, ethnicity, class, and so forth.