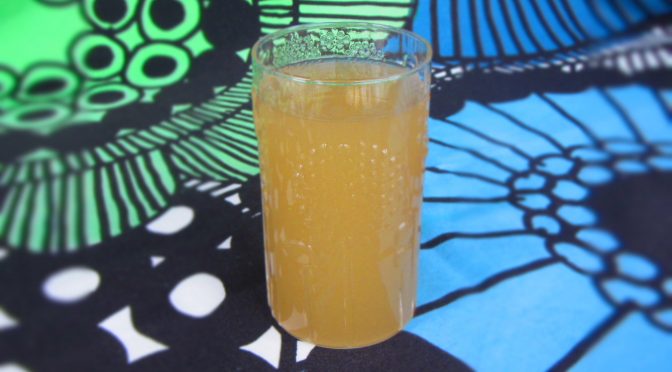 Barley beer and grape wine have a history of thousands of years in the ancient Near East. However, neither of these was the favourite alcoholic drink of the ancient Babylonians in the first millennium BCE. Instead, a beverage fermented from the fruit of the date palm was widely consumed, and ancient records from Babylonia constantly refer to its production and resale in pubs or taverns. This blog post introduces this ancient drink and describes an attempt to produce it using a 2,000-year-old recipe.

Although the research literature tends to call it “beer”, the beverage is actually closer to cider. It is produced from fruit and water and fermented using natural yeast in the dates. However, as the term “date beer” is widely used in Assyriology, it is employed in this blog post as well.

The ancient Babylonians themselves have not provided us with an actual recipe for brewing date beer. However, we do know that in addition to water and dates, a plant called kasû – perhaps dodder – was sometimes added to the beer. Despite the lack of recipes written in Babylonian, we have a date beer recipe from antiquity, recorded by the pharmacologist Dioscorides in the first century CE. According to Dioscorides, date beer was brewed using dates and water which were put into a cask and let ferment for ten days. On the eleventh day, the beverage was ready to be consumed.

In order to taste the daily life of the Babylonians, we utilised Dioscorides’s recipe to produce date beer using ancient methods. We used only two ingredients, dates and tap water. Because fresh dates were not available, we decided to use dried ones instead. This may have been the case in Babylonia as well, because the date harvest took place in autumn but date beer was apparently consumed all year round. Because the fermentation process is caused by the natural yeasts in the date fruit, we used unpasteurised dates without preservatives.

Five decilitres of dried, seedless dates were mashed and put into a small plastic bucket. One litre of water was added, but the ingredients were not stirred. The bucket was covered with a tight lid and placed on the bathroom floor with underfloor heating. It is important to pay attention to the cleanness of the kitchen utensils used, as harmful microbes can ruin the beer.

The bucket was left intact until the eleventh day. Then the lid was opened and the liquid was filtered in order to remove the date mash from the beer. We experienced some difficulties in the filtering process, which were caused by the thickness of the substance. We therefore recommend first removing the date mash from the bucket and letting the liquid settle so that solids sank to the bottom. Thereafter one can pour the uppermost, clear layer of date beer through a filter. This should result in an easy filtering process and more beautiful beverage.

We tasted the date beer immediately after filtering because it does not keep well. The beverage had a yellow, cloudy colour and fruity, acidic taste. The sweetness of the dates was gone, and the beverage tasted more like dry cider. Surprisingly, the brownish-greyish mixture of dried dates and water had turned into a beautiful, tasty drink.

Finally, a word of caution is in order: several ancient records refer to terrible headaches caused by date beer. The reader is advised to brew and drink responsibly.

Seth C. Rasmussen, The Quest for Aqua Vitae: The History and Chemistry of Alcohol from Antiquity to the Middle Ages (Cham: Springer, 2014).