I first met Olga Miroshnichenko at Lappeenranta University of Technology when she walked into my office and said: ”Hi, I’m Olga”. I did vaguely remember that I had agreed to meet a potential master’s degree student ‘whenever is a good time for her’, as I usually do, so I was not too surprised. What was a nice surprise, though, was that she spoke good English. Having seen several counterexamples among the PhD students in the LUT international MSc program, I could appreciate that. We then agreed that she would start working on a master’s thesis on titanium dioxide nanoparticles. This meeting took place sometime in February. A few months later, when I asked Olga when the thesis should be ready according to the rules of the LUT – St Petersburg double degree program she answered “By Midsummer”. ‘Houston, we have a problem’ was the first thing in my mind, but it turned out I was wrong: the thesis was ready in four months and still stands out as the fastest MSc thesis anyone has done in my supervision. 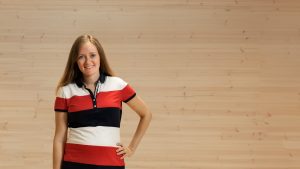 Olga was born in Rostov-on-Don in Southern Russia. At school, she was interested in both languages and math but not so much in physics. A lesson to be learnt: teaching in a boring way can do a lot of harm. Having won a few awards in math competitions she then chose to study applied mathematics and computer science at Southern Federal University in Rostov. After graduating, she moved to Saint Petersburg State Polytechnic University (now Peter the Great St. Petersburg Polytechnic University), department of Theoretical Mechanics. Being close to the Finnish border, she took a visit to Lappeenranta to meet a friend who studied at LUT. She liked the peaceful atmosphere in Lappeenranta and applied for the double degree master program in technomathematics.

Soon after Olga had started as a master’s degree student at LUT, I got an invitation to St Petersburg to discuss an option of another student, Sergei Posysaev, to study in Lappeenranta. I had the feeling there must be some non-scientific motivation, too, even though the Russian colleagues never made it explicit at that point. Olga and Sergei are now happily married and I got another good graduate student; the trip had a happy ending indeed.

Olga and Sergei then followed me to the University of Oulu, something that no Finnish graduate students or postdocs were willing or able to do. Olga has continued her work on titanium dioxide nanoclusters and her PhD thesis will be ready soon. She has complemented her studies with physics courses, which were to a large part lacking from her former education. Physics teaching in Finland has obviously been more inspiring than in Olga’s early days in Rostov. In her own words: “It changed my mind and allowed to see the beauty of Physics.”

Both coming from faraway places in Russia, Olga and Sergei are keen on seeing the world and have been active in not only finding good conferences and places for research visits, but also been able to find funding for these trips. Fluent English has definitively come in handy during those trips; Olga has also studied the Finnish language actively and even though she does not admit it, she obviously understands everything spoken around the group coffee table. Olga is now on a maternity leave; their first child was born in January 2018. She also got a Finnish citizenship recently; brain drain to the right direction, for this once.