In this third part of HYVÄT’s anniversary blog series Julia von Boguslawski, the 2017 chairperson of HYVÄT, writes about the most significant developments during her time in the board.

When I was accepted as a PhD student at the university of Helsinki in the autumn 2014, I knew practically no other PhD students and had no clue about how I should tackle this whole PhD business. When I heard that there was an association for PhD students at the university that seemed like a good place to start – and it sure was. Before I knew it, I was elected secretary for the board of 2015 when Tommi Tenkanen was our chair and continued the next year when Fanny Johansson was chair, and in 2017 it was my turn to chair the association. After that I have stayed active as an officer of the board. During these years, I have had the opportunity to develop the association together with a bunch of awesome board members.

END_OF_DOCUMENT_TOKEN_TO_BE_REPLACED

The Helsinki University Researchers’ and Teachers’ Association, HUART made a survey directed to early career researchers, meaning researchers who are doing the PhD or have graduated only a few year’s ago. Young does in other words not refer to the age of the researcher, but to the early career stage they are in. The now published results are interesting because the main themes are largely the same as the ones that came up in HYVÄT’s earlier survey for PhD researchers.  The main difficulties early stage researchers face according to HUART’s survey are: 1) unstable funding, 2) uncertain career prospects, 3) bureacracy and uncertainty of support in case of unemployment, and, 4) the experience of not being included into the academic community.

In addition, the salary system of the university was seen as non-transparent. A fifth of the Finnish respondents and 56 % of international respondents did not know according to which level (vaati-taso) their salary was calculated. This is a serious problem, and a sign of unequality between Finnish and international staff.

A few years after graduation only around 40 % doctors work in academia. However, 49 % of the respodents hoped to have an academic career within research. They saw themselves as researchers, and wished to continue doing reserach and teaching, but saw many obstacles on this path. Working hard to get an academic career, but with no assurance that the hard work will pay off, does little to motivate people. Many described an academic career as a dream that was likely not to come true. Hopelessness, cynicism, and disappointment was evident in the open answers about career prospects.

3. Bureacracy and uncertainty of support in case of unemployment

The unemployed reported that unemployment meant increased uncertainty and often the need to really fight for their rights. Especially those working on a grant described arbitrary descisions that sometimes interpreted them as entrepreneurs or students, which has meant that they did not get any unemployment support, while others in the same situation did.

4. Experiences of not being included into the academic community

A little more than 40 % of the respondents reported that they do not feel included in the academic community. (In HYVÄT’s survey 47 % reported the same). The employed ones reportd being a little bit better integrated, but but still 38 % of them too did not feel integrated. The open answers said that regular staff belittle the position of young researchers, and that the early career researchers were excluded from many activities and infrastructures such as teaching opportunities, pedagogy courses, e-mail lists, workspaces, and laboratories. Some grant researchers even did teaching and other kinds of work for free in order to gain experience to put on the CV.

This was seen as unfair because the university nevertheless profits from all articles and completed degrees that the affiliated young researchers produce.

The entire report can be read here (in Finnish only).

All HYVÄT members are warmly welcome to the Autumn General Meeting and the Christmas party that is right after the meeting on Tuesday December 4th. The meeting starts at 18.00 at Kattosauna Sivistys (Leppäsuonkatu 11, the same place where we had sitsit in September).

We are still looking for boardmembers to the board of 2019. The meeting can elect 6-12 board members and the positions include chairperson, secretary, treasurer, event coordinator, members coordinator among others. The board meets around once month to talk about timely matters – we work in a relaxed way, so there’s no reason to feel intimidated even you you don’t have any experience about similar associations! As a board member you get to organise activities you would like to see happening, be they parties, or more academically inclined things. You also get to participate in setting the agenda on what things concerning doctoral education HYVÄT should bring up to discussion with the university. All this in great company, naturally. If you got curious, feel free to contact any of us board members to find out more, or to announce your interest, or you can email phd-board@helsinki.fi for more information. You can also just show up in the meeting.

In the meeting, all the HYVÄT members who have paid their membership fee have the right to vote.

Direcly after the meeting we continue with the Christmas Party in the same location. Do not miss this chance of glögi and gingerbreads in the best of company, and who knows, if we have been good this year, Santa might come by!

The agenda for the autumn meeting is:

HYVÄT participated in the National Doctoral Education day in Lappeenranta 9th October 2018. The main theme for the day was working life skills and competencies of PhDs, but many other themes were touched upon as well. This post is a try to sum up some of the interesting discussions we participated in. Because of the many parallel sessions we were forced to pick and choose some themes, but the entire programme can be seen here.

One informative talk was by Outi Suorsa who presented the national PhD career survey from 2017. Her good news were that eduction still defiitely pays off, because the percentage of unemployed PhDs was small, only between 1-7% depending on the discipline. The number is larger for those with a master or bachelor degree. Furthermore, most respondents had perceived the doctotal degree as a benefit for their career: 60% responded that it had given them more demanding tasks at work and 50% responded that they had got a higher salary thanks to their degree. However, only 40 % of the respondents worked with research, which indicates that universities need to focus more on supporting also other than purely academic career choices of doctoral students.

The question then is: how should career advice and mentoring for doctoral students be organised to best serve their needs?

At the University of Turku, career advice has been integrated into the supervison: the doctoral students have the option of having a discussion of future career options with their supervisor. As support for the supervisors, the university has provided them with material on career councelling. This is a brave try to integrate career coaching into doctoral studies, but are the supervisors, who themselves have a university career, the right persons to give advice also on career options outside the university? Would it be possible to find other solutions? Would career courses tailored for dischiplinary needs and led by university career services be the best alternative?

Another solution that was presented by Essi Huttu was the PoDoCo programme that helps to match academically trained PhDs with companies that need their brain power. It is a joint initiative of Finnish universities, industry and foundations that you can read more about here.

Timo Korkeamäki presented a European survey on doctoral education made by the EUA Council for Doctoral Education. One interesting finding was that the majority of universities who responded couldn’t provide clear answers about the careers of PhDs, which indicates that more attention should be given to how and where PhDs get jobs after completing their degree. A great many suggestions on how to improve things on this point were put forward: career survey’s and follow-ups of graduated PhDs working life, career guidance for those still studying, mentoring networks, contacts to alumni, etc. Over all, there seems to be an agreement among everyone working with doctoral education that academic as well as other career options should be presented as equally good, and that more training on how to build a career should be incorporated in doctoral studies.

The EUACDE survey’s data on Finland revealed that people here graduate way slower than in many other European countries. Of those who started in 2009, only 40% had graduated within 5 years. During the discussion that followed many possible reasons for this were suggested: the difficult situation with funding, the amount/accessibility of supervision, the bureaucratically long process of graduation that can take months and months in Finland, etc. Things like bureaucracy should be possible to change if there is will, but securing enough funding for research unfortunately seems harder to accomplish in these days.

HYVÄT’s contribution was a presentation on the results of 2018 PhD student’s survey. Anton highlighted the key findings:

Improving things like supervision, equality between doctoral students, community-belonging, and funding – the structures doctoral researchers work in – might well be part of the solution to make doctoral students graduate faster in Finland.

Supervision was a key theme also in a presentation by Tanja Johansson who talked about supervision as twofold, consisting of 1) seeing that the PhD student aquires the necessary research skills, competencies, and finishes the thesis; 2) mentoring and supporting the doctoral student in the process. She suggested courses and training for both present and future supervisors as something to look into. Could training as supervisor even be part of the doctoral training? Mentoring and coaching skills could be wortwhile also in working life outside of academia.

To sum things up, many good suggestions on how to improve doctoral education were made during the day. There are many people around the country who keep working with the benefit of universities and doctoral student in mind. However, it is not an easy task to improve and develop higher education in the current political climate that has been characterised by cuts in university funding.

The 24th May HYVÄT participated in the Grand Sitsit, an academic dinner party held outdoors on the Senate Square. The event was organised by the Student Union of the University of Helsinki (HYY) and the Co-delegation of student nations. The special occasion this year was the Student Union’s 150 anniversary, and the 375-year anniversary of the old student nation system.

The event was now arranged for the third time (although this was the first time HYVÄT participated) and it gathered around 2000 partying students on the square. Most of them were from the Student Union’s organisations and the Student Union, but the guests included also the Chair of the Board of the University of Helsinki, President Tarja Halonen, and Deputy Mayor Anni Sinnemäki.

The program consisted of traditional eating, drinking and singing together. HYVÄT served a three course vegan meny to go with the singing, which consisted of songs in Finnish, Swedish, English, as well as occasional German, Estonian, and Latin.

Some of the best moments are presented in the pics below. 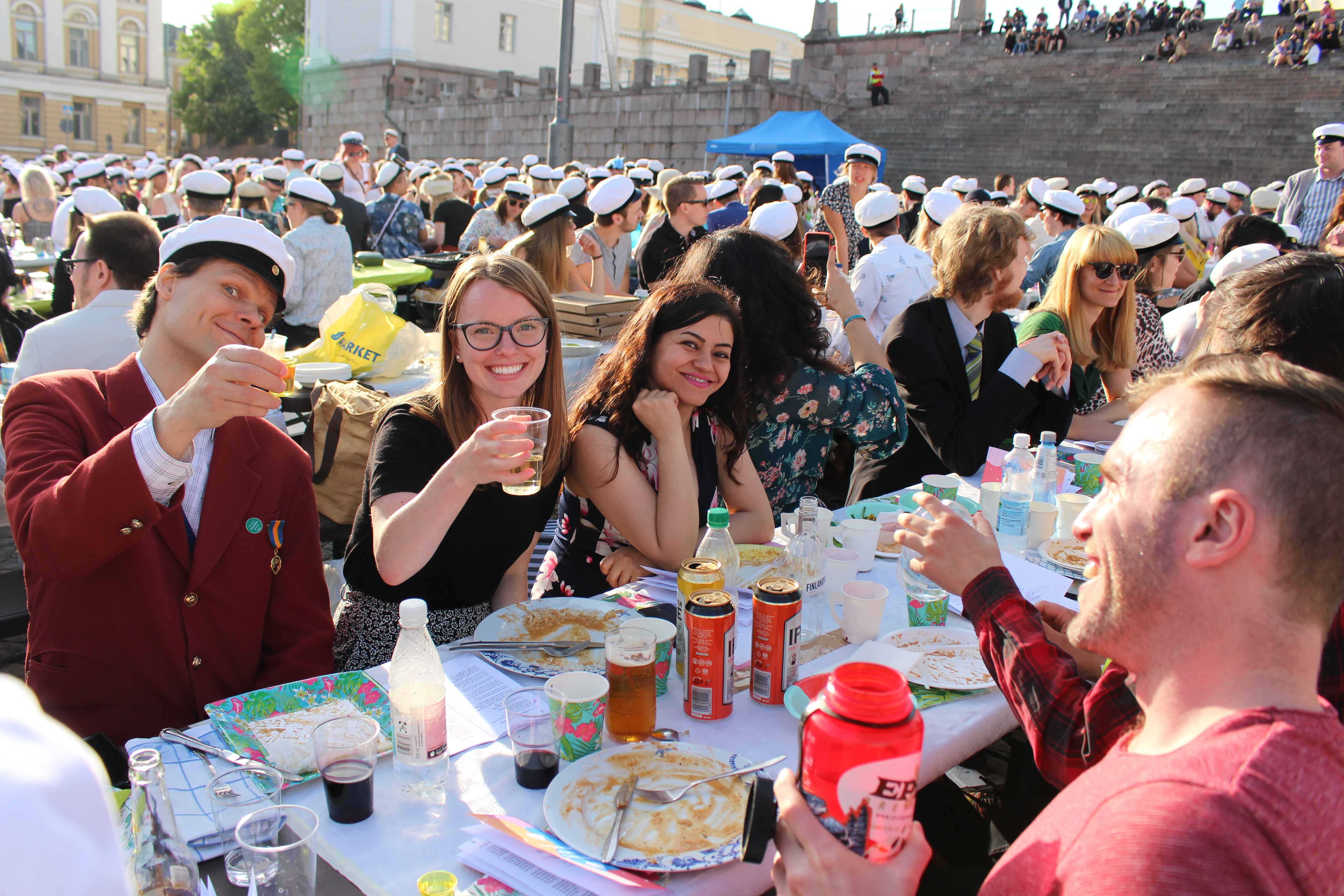 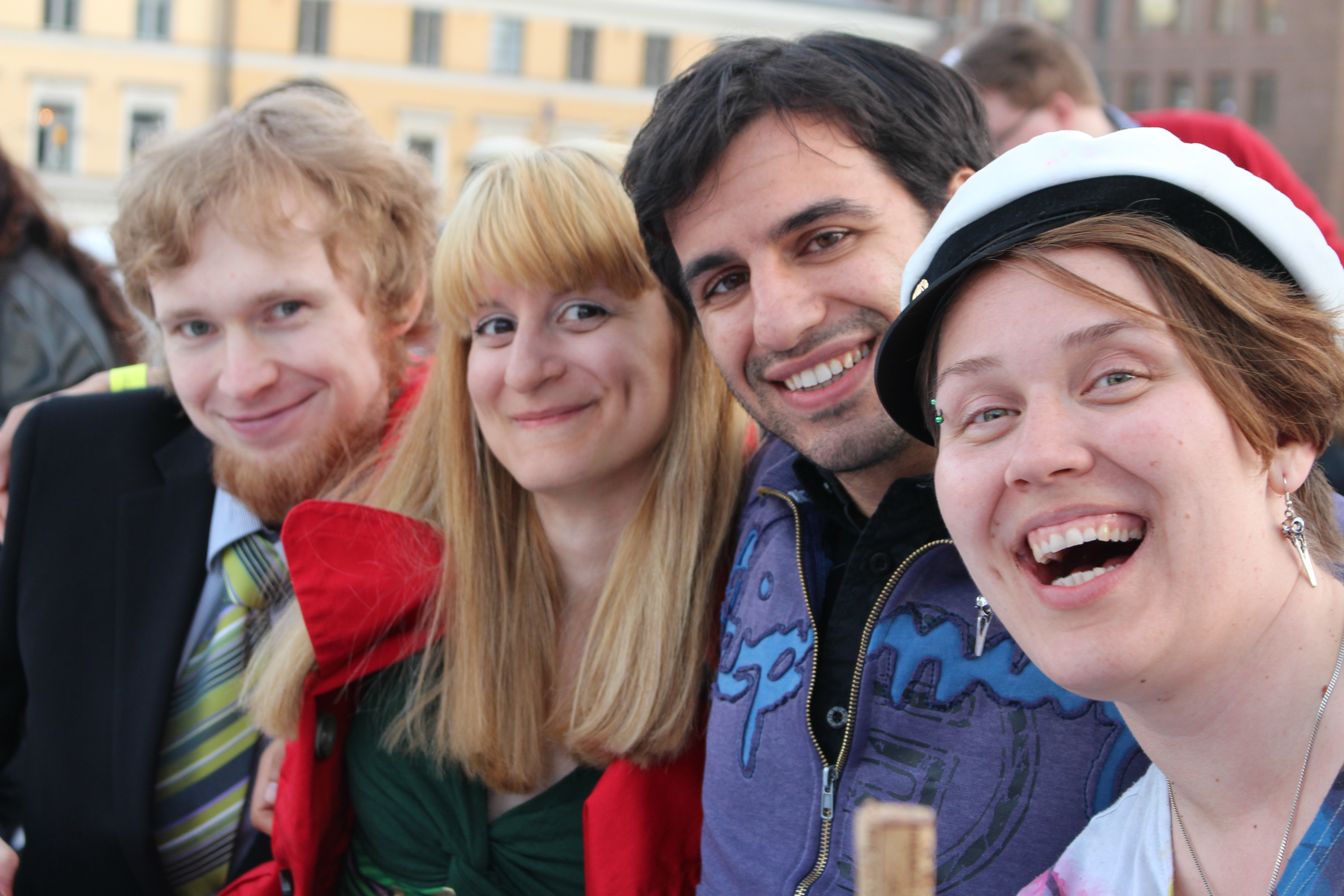 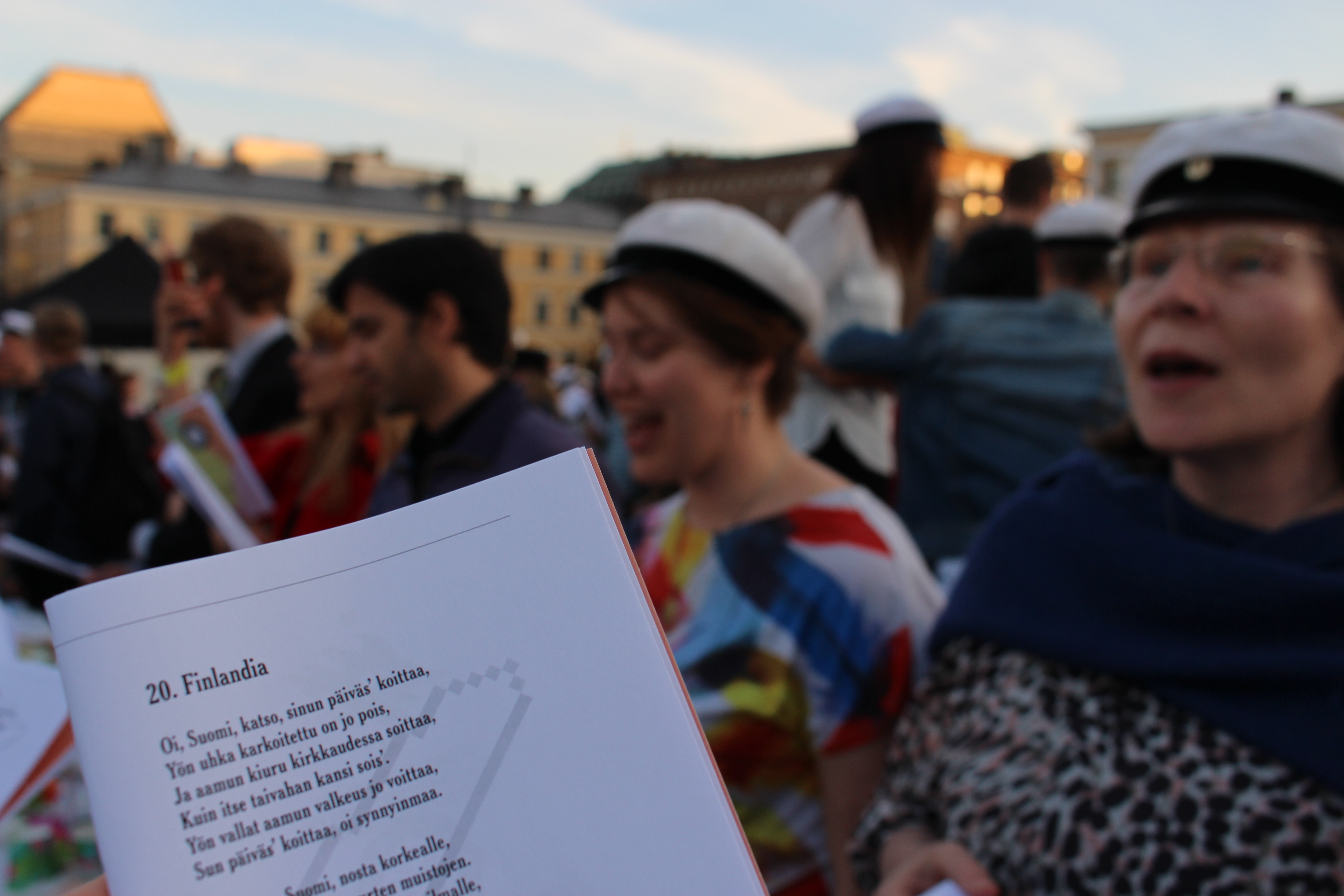 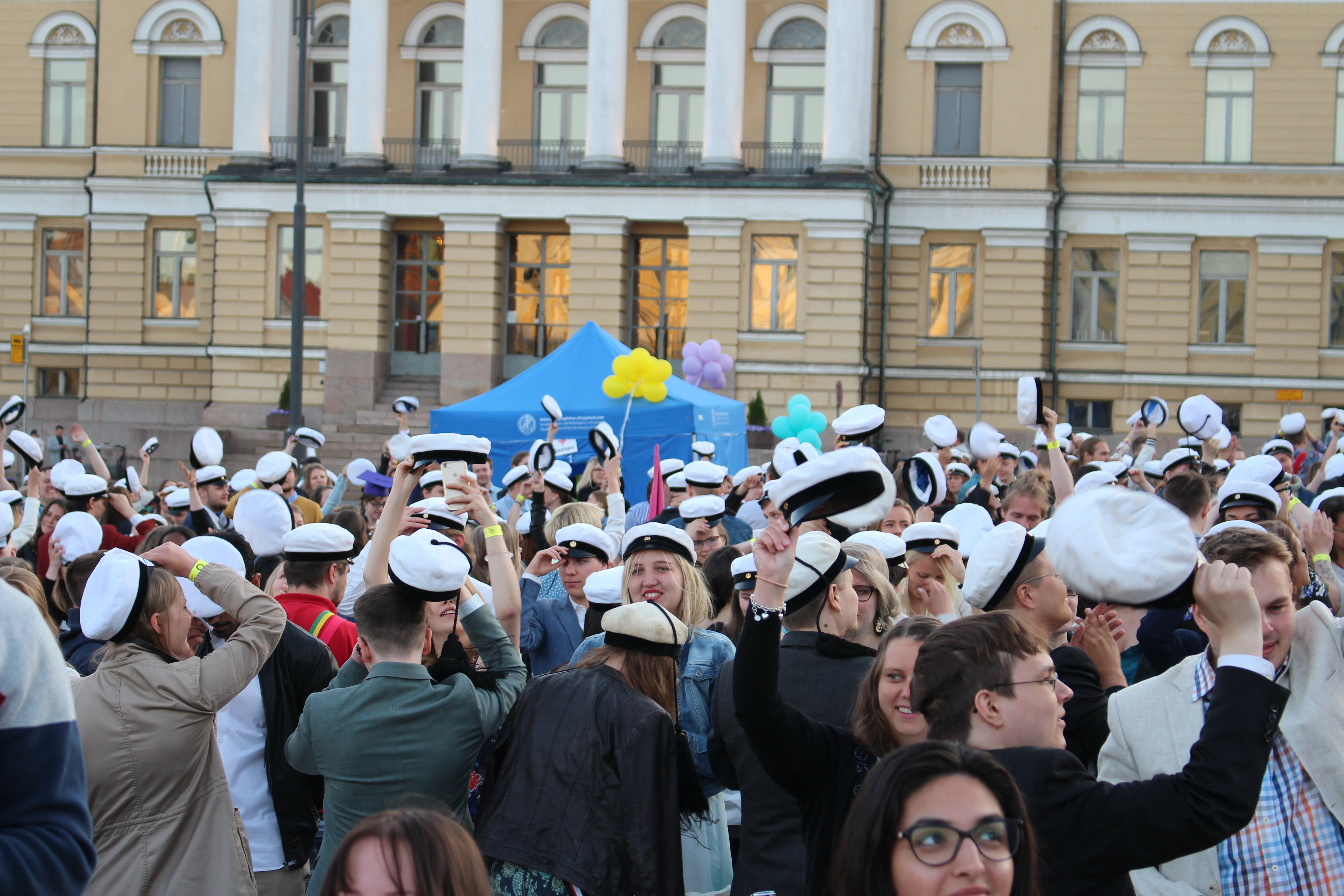 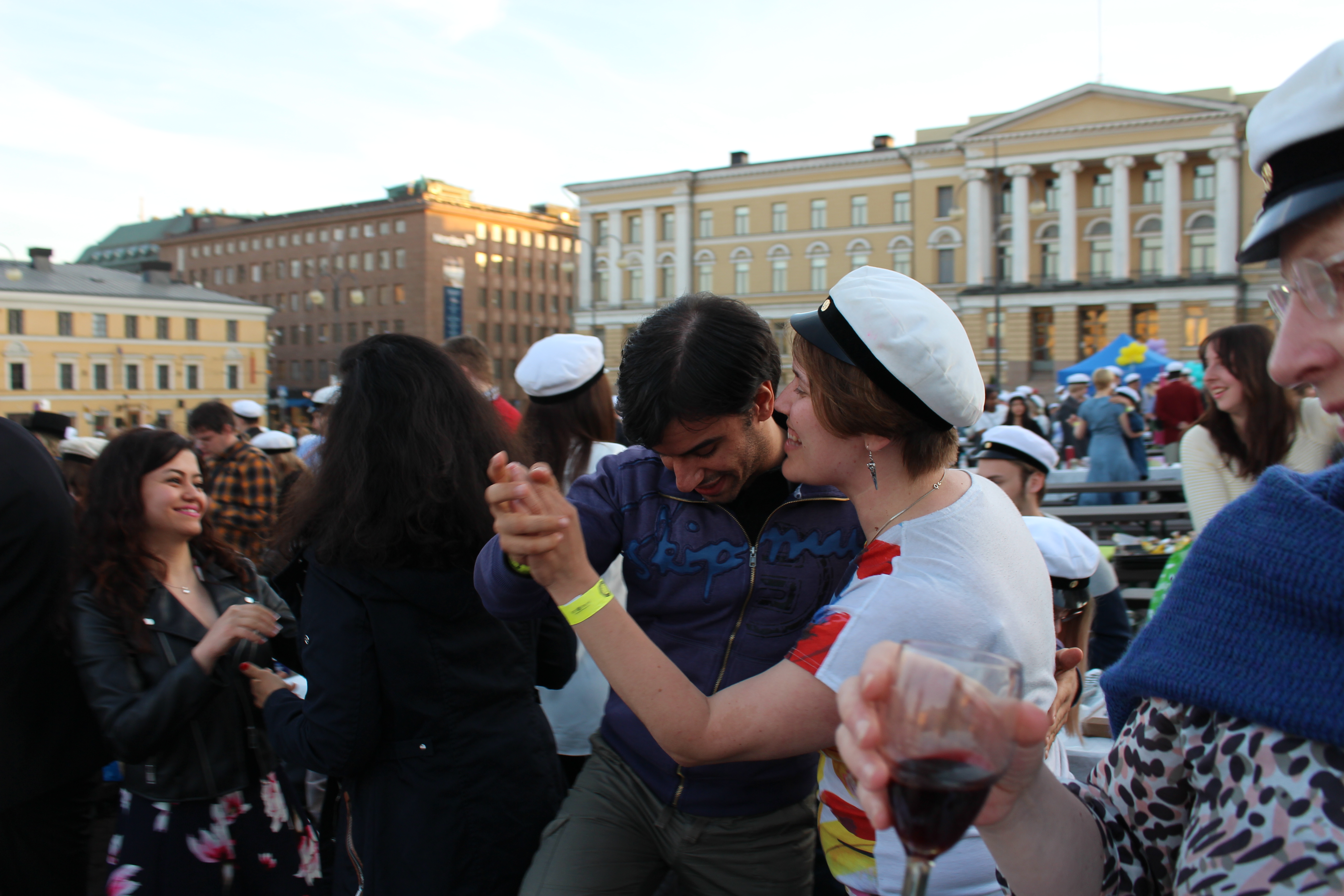 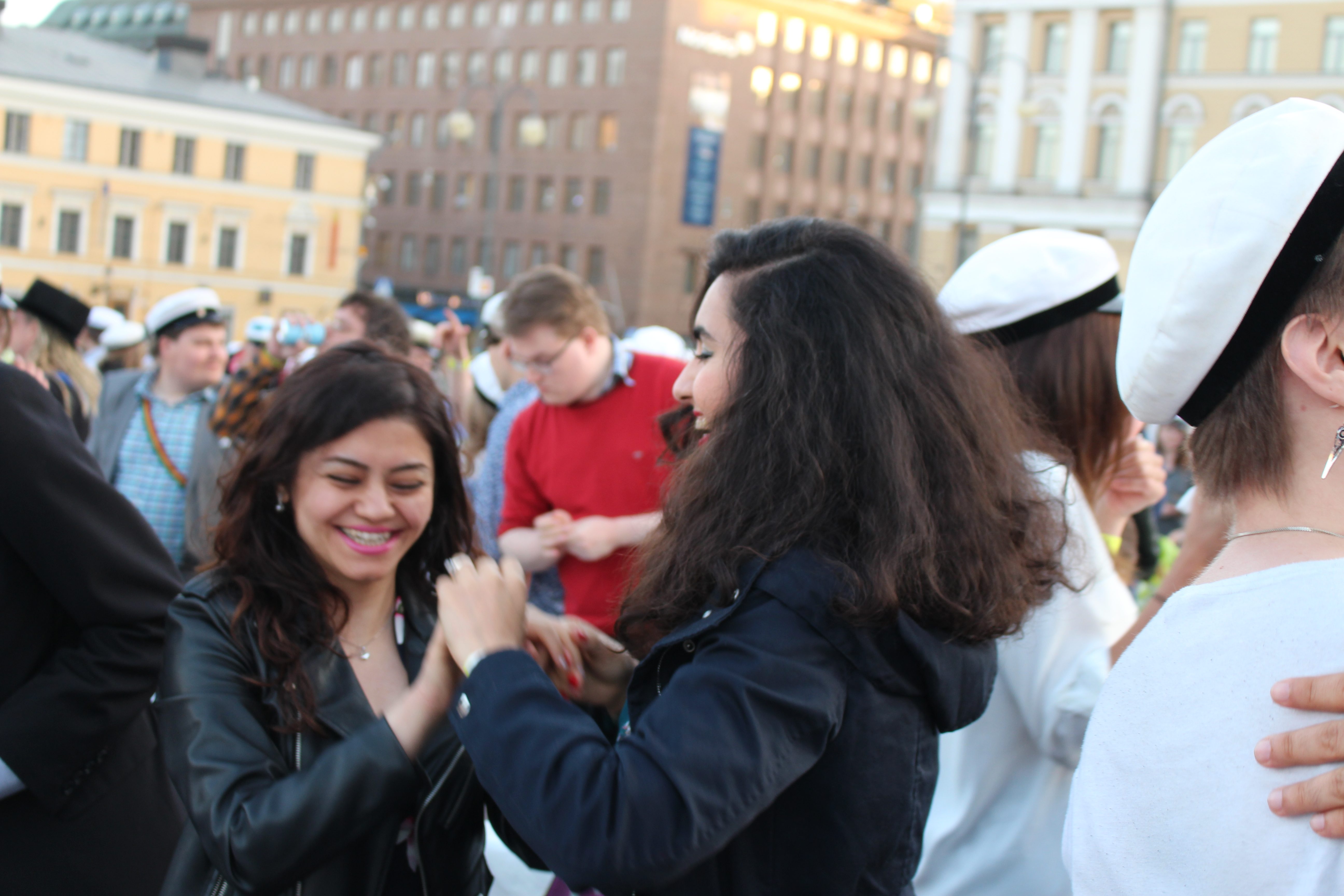 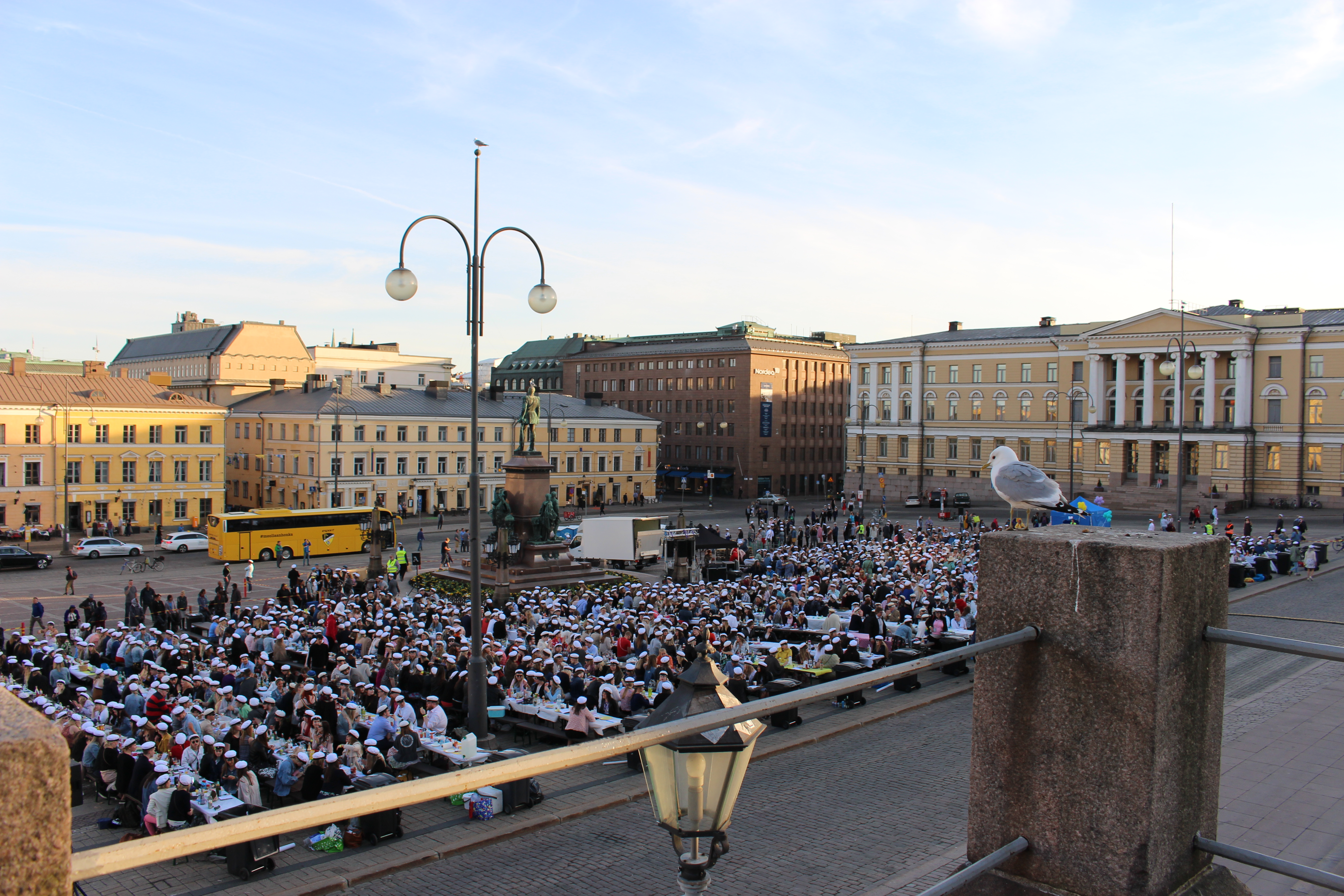