The project studies one Pompeian city block or in Latin insula, which is situated right in the geographical center of Pompeii. On its west side runs the town’s main north-south street, called in modern times Via Stabiana. On the north side of the insula there are the Central Baths, a public building which was still in the process of construction when Pompeii was destroyed in AD 79. On the other sides of the insula there are usual city blocks very similar to the one in question here. 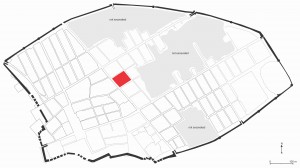 A plan of Pompeii with highlighted insula IX 3.

The insula is almost a regular parallelogram in shape and its length is ca. 60 m and width ca. 50 m. Its ground area is ca. 3000-3500 m². In AD 79, the insula had 25 doors to the streets around it and altogether 18 properties as some of the houses had more than one street door. In the northeastern part of the insula there is an unbuilt plot, which must have accommodated 2-3 houses. They were perhaps destroyed in the AD 62 earthquake and for some reason never built again. 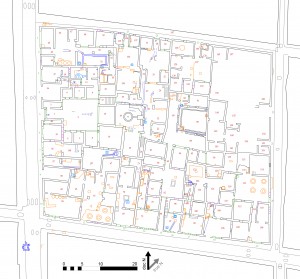 Part of the houses have combined living and production quarters, such as House IX 3,1-2, where there are specialized laundry rooms in addition to the living quarters, or House IX 3,19-20, which combines a large bakery to a shop and living quarters. In the southwestern corner there is another bakery, House IX 3,10-12 which does not seem to have actual living quarters. Part of the houses are small shops, which are most common in the west side on the main street, Via Stabiana, particularly Houses IX 3,6-9. In the south side of the insula, there are some combined workshops and shops with possible living quarters in the first floor, for example Houses IX 3,13 and IX 3,16-18.

There are two larger dwellings and the other of them, the House of Marcus Lucretius (Houses IX 3,5 and 24) covers almost a fourth of the whole insula. The other large dwelling, House IX 3,15, is much smaller and presents a curious long and narrow ground plan. In the north side of the insula there are also two small dwellings, Houses IX 3,23 and IX 3,25.