The last field season of the project (as far as we know) took place in September 2012. A combination of old and new researchers and students took on the remaining two houses (IX 3,19-20; IX 3,23) and the so-called empty plot (IX 3,21-22)  in the eastern part of the city block. Buildings archaeological work in some 28 complete rooms was originally planned, but eventually some kind of documentation was done in 42 rooms! The wall painting documentation continued in the city block as well – final work was conducted in Houses IX 3,15 and IX 3,19-20. The remaining finds processing was finished as well as study of the wall painting fragments found in the excavations.

The project office in the main dining room of the House of Marcus Lucretius bustled as there were also visits by other projects. The Analytica Pompeiana Universitatis Vasconicae project combined Spanish and Finnish researchers from University of the Basque Country (Euskal Herriko Unibertsitatea) and the Metropolia University of Applied Sciences (Metropolia Ammattikorkeakoulu). Their work concentrated on studying the pigments of the wall paintings and their properties. 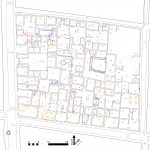 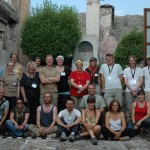 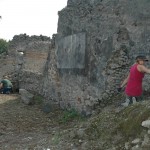 A Danish team (Pompeii Aerial Survey Project) visited also conducting some exciting documentation with a drone flying over the city block as well as a bit more conventionally by using a laser scanner.

The southeastern corner of the city block is occupied by a large bakery (IX 3,19-20). Its study was a shared project with the French team working on bakeries in Roman Italy (Pistrina: les boulangeries de l’Italie romaine). They worked on the spaces connected with the baking activities and the other areas were left for EPUH. That meant four rooms and a corridor (rooms 108-112) in the southeastern corner of the house, one room (114) in the northeastern part of the house as well as a small garden (room 123) flanked by a corridor (room 122) between the garden and another room with an unspecified function (room 124). Room 108 was probably a shop with a door to the street south of the city block. There is a possible altar in one corner and remains of a staircase in the eastern part with shelves under the stairs. The floor in the northern part featured one of the three flower decorated opus signinum floors of the season: rectangles made of small, colored stone tesserae with a flower motif inside them. The large room north of it (room 110) had originally been two rooms and the northern one featured a blocked doorway to the corridor in the west (room 111). The floors in the north and south parts of the room were different and the southern floor featured rows of small white tesserae forming a band running along the walls with yet another flower motif inside the band. The room to the west of the shop (room 109) featured well-decorated walls and a simple opus signinum floor. A narrow corridor (room 111) connected the shop to the mill of the bakery as well as allowed access to the large and beautifully decorated room in the west side (room 112). The motif of the painting is Triptolemus which suits the bakery context well. 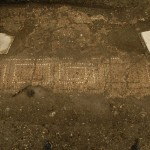 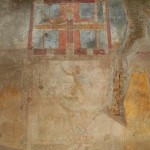 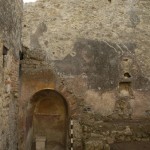 House IX 3,23 opens to the quiet north alley and it was clearly a dwelling. A narrow entrance (room 146) is flanked by a small toilet on the east side (room 125). The toilet had been made into a small room (room 126) with apparently quite old wall paintings (possible First Style?). The facade wall in room 126 is pierced with a drain channel at floor level. The third room in the house frontage is large and nicely decorated (room 128) – a possible dining room? The paintings could be of Second Style. There could have been a cistern under the floor as the central part of the floor features a circular collapse. The room had previously had access to room 129 in the southwest, but in the last phase this doorway was blocked and the doorway in the southeast was opened to room 127. The atrium is replaced by a partly open courtyard (room 127) with a colonnade in the west and south sides. Only foundations of the columns were preserved. Remains of a cocciopesto floor could be seen in the northeast corner. In the southeastern corner, a down pipe had originally brought rainwater from the roof to a channel running towards the cistern in room 132. Room 129 opens to the western part of the courtyard and it had been previously been connected with room 128 in the north and room 29 in House IX 3,24 in the west. Room 130 features the third floor with flower motifs – this time the classic a crocette style. The three rooms in the southern part all feature old connections from west to east. The wall between rooms 131 and 132 had originally looked more like a colonnade, but the southern and central gaps were blocked first before the whole wall has been closed. Room 132 had a doorway to room 133 in the east before the wall paintings in room 133 has been made. Room 133 was connected with the house(s) in the empty plot in the east via a decorated colonnade. This connection was blocked completely only in the last phase. Room 133 and/or room 132 might have been roofless as there is a cistern head in room 132 as well as shallow trough-like channels in its plaster floor. It is apparent that most of House IX 3,23 had belonged to other properties and its current ground plan had been created only maybe after the AD 62 earthquake as suggested by Amedeo Maiuri. 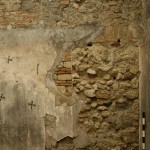 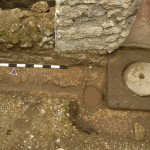 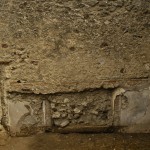 The last area for the field season was the so-called empty plot or houses IX 3,21-22 in the northeastern corner of the city block. The old excavation reports maintain that it was in ruins and that the area was covered with refuse. The situation was made worse by the bombing of Pompeii in 1943 when one of the bombs hit the street right in front of doorway 21 and caused collapses in the southern part of the plot. Based on old photographs and the miniature model in the archaeological museum in Naples it was clear that there had been fairly well preserved walls in the southern part and it even looked like the excavation might have reached floor levels in the southwestern part. Now the soil cover, for example, in room 141 reached almost to the frieze of the preserved wall paintings. It was possible to trace most of the walls in the south part and to conclude that it had been a row house with a narrow entrance (room 150) in the middle flanked by two small rooms (rooms 151 and 152). The atrium in the middle was long and narrow (room 153). There were at least two rooms (140 and 141) in between before a garden in the back (room 142) flanked by two rooms (143 and 144). Room 139 opened westwards and could have been part of the northern house. The walls in the facade and towards House IX 3,19-20 in the south were in opus africanum suggesting an early building date. Very few walls could be observed northwards. There had probably been a third entrance in the middle of the plot, but this had been blocked. Some walls and a possible water tank were found near it. In the north part, the facade lines could be traced, but all the walls were in very bad condition. Only one room could be outlined in the northeast corner (room 145). The soil cover in the area is mostly from the ancient period and most of it consisted on apparently household waste – pottery and bone. The bomb had spread a thin layer of building debris and paving stones on top of it especially in the southern part. A floor level was reached in between rooms 140 and 142 and the soil cover was different in this area compared to the eastern and northern parts of the plot – much thinner, with less pottery and more building debris. It seems likely that the floors indeed were uncovered at least in rooms 140, 142 and 144. The soil cover in room 141 remains a mystery as it seemed to consist of pure volcanic soil – it looked very much like the layers uncovered during the excavations in the House of Marcus Lucretius and in the north alley! 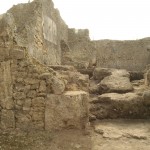 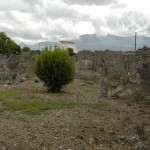 Field work is now over and the project’s attention will turn towards preparing the publication. Saying goodbye to our insula was both sad and happy – it feels amazing that we managed to finish the work and at the same time it feels sad to know that we might never return there to continue our work for example with excavation.