The Pompeii Project of the University of Helsinki studies one city block (Lat. insula), IX 3, at the heart of ancient Pompeii. The main goal is to document the standing structures – walls, floors, paintings etc. – with modern archaeological methods and through this study to understand the building history of the insula as well as how it was used through time. In addition to the documentation, small scale archaeological excavations are conducted below the AD 79 floor levels. These areas will hopefully shed light on the earlier phases of the insula.

A new era in the history of Pompeian Studies began in the late 1990’s. It was decided that the authorities would give  excavation permissions more freely also to foreign institutions if they took responsibility of larger areas instead of single houses. The main aim of the archaeological activity that followed was directed to investigating the areas excavated in the 18th and 19th centuries many of which had remained virtually unpublished and were in danger to perish without proper documentation.

Already at an early stage we were invited to participate in these efforts because Finnish scholars have for a long time studied different aspects of the Pompeian reality. For various reasons we were not among the first institutions to hurry to Pompeii but, when we in 1998 organized in Helsinki an exhibition on Pompeian jewellery and wrote an extensive guidebook to accompany it, the attitude started to change. In 2001, several international experts in Pompeian studies were invited to speak at a series of seminars organized by the Department of Classics and financed by the Academy of Finland. Discussions with the visitors convinced Professor Paavo Castrén to start actively pursuing funding for a field work project. Planning the project was started in the fall of 2001 when it was decided that the project would study one city block. 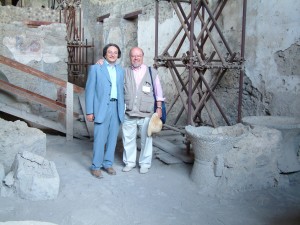 One of the key persons in persuading Finns to start the project was Antonio Varone from the Pompeii Soprintendenza. Here with Paavo Castrén in 2003.

The project was started officially in 2002 and the initial funding was received from the University of Helsinki. The Academy of Finland awarded the project a generous grant that enabled our work from 2004 through to 2006. The grant from the Finnish Cultural Foundation was used to start the second phase of field work in 2009 and the work was continued to its end in 2012 with funding from the Emil Aaltonen Foundation.