The project’s first one-month long field season took place in May 2003 and 18 persons participated in the work. Buildings archaeological documentation with clearances was conducted in 12 rooms (1-9, 13, 15, 17) and excavations were done in two areas (trench AA in the atrium and AB in room 17). The wall paintings were worked on in the area around the atrium. 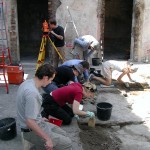 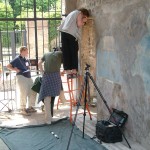 The central research area was the western part of the House of Marcus Lucretius by Pompeii’s north-south oriented main street, Via Stabiana. This is the public and representational part of the house and features the entrance (room 1), small rooms (4-7) around the atrium (room 2) as well as lavishly decorated representational areas (rooms 8, 9, 15 and 16). In addition there is a small storage space next to the entrance (room 3) which had a staircase to the upper floor in its western part.The atrium complex is connected with the peristyle area through a narrow corridor and a low staircase (room 17) in the northeast and to the kitchen area in the north through the western ala (room 9). 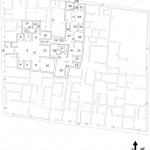 The results of the buildings archaeological investigation were quite slim as many of the rooms in the atrium area are covered with wall paintings and have intact floors. This means that very little can be seen of the building phases of the walls and no excavation can be carried out in these rooms. Despite these hindrances it was possible to deduce that most of the western part has been almost completely rebuilt in a relatively late phase, perhaps to be connected with the damages caused by the AD 62 earthquake. The earlier ideas of renovation work just before the destruction of Pompeii in AD 79 were also strengthened as it was possible to verify that the low pool or impluvium in the atrium was indeed dismantled and under complete renovation in AD 79. 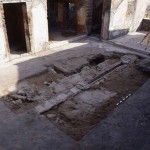 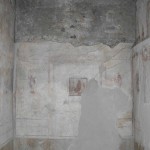 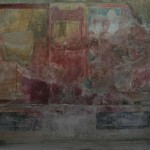 Something of the earlier stages of the house was revealed in the clearance and excavation of rooms 2 and 17. The floor level has been at almost the same level for a considerable period of time as an old pool and water reservoir connected to it were found in the northwest part of the atrium very close to the level of the preserved floor level. The orientation and position of the old pool compared to the current walls is different and indicates that the earlier atrium was maybe slightly differently oriented. Doors had originally connected the atrium and room 4 to the shop IX 3,6 southwest of the atrium – these had been blocked probably in connection with the last phase rebuilding.

Various water channels were also found. Part of them were clearly sewers built under the floor levels and carrying moisture to the street. Some could have housed lead pipes running from the street through the atrium towards the peristyle.