The largest dwelling of the insula is the House of Marcus Lucretius (IX 3,5/24), which consists of a combination of two houses – at some point in time the houses 5 and 24 have been connected. The house covers ca. one fourth of the insula. It represents fairly well a rich Roman’s home in size, shape and lavishness of decorations. It features over 30 rooms in the ground floor and several in the first floor. 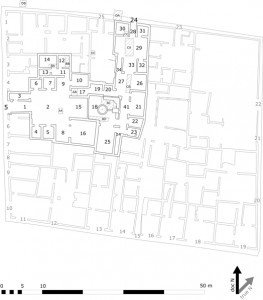 Ground plan of the House of Marcus Lucretius.

The main entrance opens to the main street in the west. The hall (room 1) is decorated with a mosaic floor and beautiful blue wall paintings. A small room for a staircase upstairs (room 3) can be entered through the hall. The heart of the house is the great hall or atrium (room 2), which has a pool in the middle and above the pool a hole in the roof for letting in light, air and rain water to be collected in the pool. Atrium is a multi-purpose space: it serves as a storage space, work area, waiting room for the master’s guests as well as a the major throughway to the other parts of the house. On both sides of the atrium there are small rooms, cubicula (rooms 4-7) which are probably used as bedrooms. 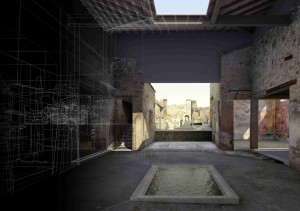 Reconstruction of the atrium area (image by Ale Torkkel / Metropolia).

At the back part of the atrium there are two decorated rooms or alae (rooms 8-9), which probably served as some kind of reception areas. Between them there is the master’s room, tablinum (room 15), where the master received his guests. South of the tablinum, there is a large, very lavishly decorated dining room or triclinium (room 16) with mosaics on the floor and fine wall paintings. 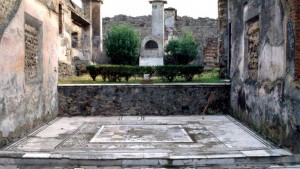 Room 15 with a view to the garden.

The representational part of the house continues through room 17 to a higher level centered on a small garden (room 18). The garden features two fountains and it is decorated with many statues, which are set so that they can be admired best through the large windows in the tablinum and triclinium. North of the garden there are two rooms (19-20) for entering the eastern part of the house, each with large windows to the garden. East of the garden there is a large room (21), which probably functioned as some kind of dining room or other reception area. Its character is more private than that of the rooms in the western part of the house. Beside this room, there are two small spaces. Room 22 is perhaps a small bedroom and room 23 a toilet. South of the garden there is a large triclinium (room 25) and a basement (room 24). 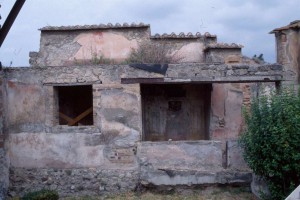 Service areas can be found to the north of the representational part of the house. The kitchen area is entered through room 9. The kitchen (room 14) features a large water reservoir as well as a cooking counter and a small oven. Next to the kitchen there is a large toilet (room 13) probably used by the service staff. Rooms 10 and 12 are probably storage spaces. Room 12 served as a light well for the kitchen area as it probably was not completely roofed. 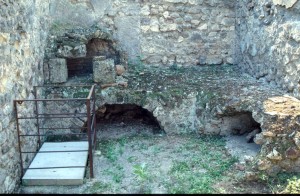 The kitchen (room 14) was equipped with a cooking podium, oven and cistern.

House IX 3,24 was at some point in time connected to the house IX 3,5. Previously, it functioned as a small independent dwelling with a door to the narrow street to the north of the insula. In the last phase, this house functioned as a service quarter as, for example, remains of a carriage were found in there. Its ground plan is nevertheless one of a small Roman home with an entrance (room 28) flanked by two small bedrooms (rooms 30-31). All these rooms have doors to the atrium (room 29), through which one enters a small room (32) and the tablinum (room 33). Beside the tablinum, there is a narrow corridor (34) to the back of the house, which was earlier perhaps a small garden (rooms 26-27). Also the eastern part of the house had an upper floor, which could be entered by a staircase in room 26. 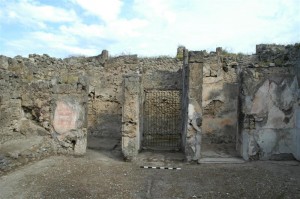