Insula IX 3 was first discovered in July 1846 when the central part of the Via Stabiana was first cleared of lapilli. As was the way of excavation in those days, the street was emptied and each door opening was looked into as well. So also in our case, and in the House of Marcus Lucretius room 1 was the first area excavated. The house got its first name, Casa delle Suonatrici (House of the Female Players) from the paintings in room 1. Later in the same year, in September 1846 the small shops around the House of Marcus Lucretius (IX 3,4; IX 3,6 and IX 3,7) were excavated at least partially.

Starting in March 1847, the rest of the House of Marcus Lucretius as well as Houses IX 3,1-2 and IX 3,25 were excavated. It is likely that the luxurious blue wall paintings of the vestibulum attracted the excavators to dig deeper into the building which promised more beautiful wall paintings and other precious objects. The work was done by Italian work crews under Italian leadership, but they were observed by an outsider, Edward Falkener, an English architect and antiquarian interested in classics. He wrote a report of his observations in 1860 and says in it that the house was selected for excavation because he requested the work and that he also supervised the excavation – a highly unusual arrangement in the mid-19th century Pompeii! Our second source to the work, the excavation diaries (edited and published by Giuseppe Fiorelli in the 1860s), do not offer any clues on the reason of digging the house. 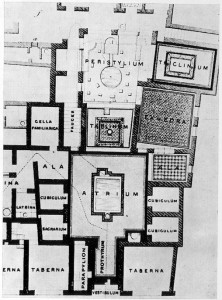 Part of the top plan by Edward Falkener published in his report in 1860.

The work started from the street side and proceeded inwards in vertical sections revealing one room after another. The lapilli and remains of structures were removed and finds were collected and recorded. The garden (room 18) was reached by late April 1847 and work in House IX 3,24 began in August. By early October the northwestern part of the insula was excavated. In 1849 the pope Pius IX visited the site and on that occasion the shops IX 3,8 and IX 3,9 were probably excavated at least partially. It is also possible that this excavation was just a show case for the benefit of the Pope and the real layers had been dug much earlier. Some work was conducted also in the southwestern part of the insula, in House IX 3,10-12 in 1850 and 1851.

Major excavation of the insula was begun only two decades later, in 1870, by Giuseppe Fiorelli, who also published the first account of the houses in the southern and eastern parts of the insula. Most of the area was revealed by the end 1871, but it seems that some work was conducted in the area also later. In the miniature model of Pompeii at the archaeological museum in Naples dated to 1876, the insula seems completely excavated. Fairly vague references to excavations and trenches in the House of Marcus Lucretius can also be found in the texts of the 20th century studies.

Even though the House IX 3,5/24 was at the time of its discovery a fairly popular target for visits, it lost its attraction quite soon to larger and more luxuriously decorated houses at Pompeii. The insula has been closed from tourists for most of the past century. One of the most beautiful sights in it, the statues in the garden were removed in the 1960s after the Silenos statue standing in the niched fountain was stolen. 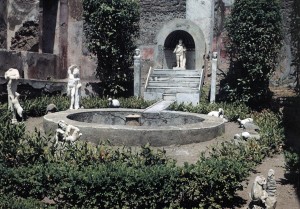 Garden (room 18) in the House of Marcus Lucretius in the 1960s before the Silenos was stolen (photo by Helen Väänänen).

The insula has not been studied very much after the initial field work was completed. Brief descriptions can be found in guide books and Pompeian catalogues etc., but no major study has been conducted before EPUH started its work in 2002. In the 1980s, an American archaeologist, Eugene Dwyer, studied the statues and some choice finds in the house as part of a larger work concerning domestic sculpture at Pompeii.