The project was started in the spring of 2002 with a long planning phase during which the methods employed were studied and designed. The work consists of many parts: buildings archaeological documentation, excavation, wall painting documentation, surveying and photogrammetrical documentation. In addition, archives in Pompeii, Naples and elsewhere are studied in order to find data concerning the old excavations and their results in the 19th and 20th centuries.

In the fall of 2002, a two-week field season was held in order to test the chosen methods. One-month long field seasons were conducted from 2003 through to 2006 conducting work in the all the major fields. Main surveying work on the ground plan as well as archaeological work in the House of Marcus Lucretius were finished according to plans in 2005.  Finds processing of the excavations was done in 2006 and 2007. The project returned to the insula to continue its work in the spring of 2009. This time the main emphasis was on finishing the buildings archaeological and wall painting documentation of the insula. This work continued until the fall of 2012 when the last field work was conducted. 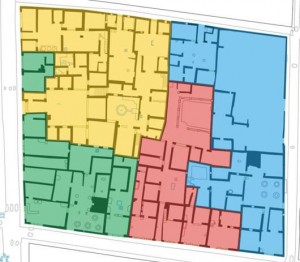