The project’s city block can be divided into houses which in turn can be divided into various rooms. Each room consists of four walls, floor and sometimes of other structures, such as water channels, cisterns or staircases. Describing these structures forms a significant part of the project’s work. The city block features 25 entrances leading to 18 house units with over 150 rooms. A quick calculation reveals that there are over 600 walls, 150 floors and a huge number of other features to document. 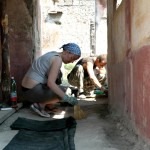 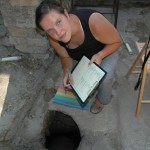 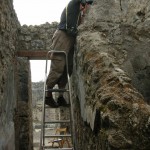 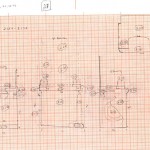 The buildings archaeological analysis consists of several work phases. First, the structures must be cleared of soil, vegetation and other rubbish – there is often as much as 20 cm of modern soil over floors to protect the surfaces. The structures need to be seen as completely as possible. After clearance, each structure is sketched to scale so that the described units can be discerned afterwards. Each feature is also photographed as well as surveyed for the ground plan.

The description of standing structures is based on the same principles as the description and interpretation of the soil layers in single unit excavation. Each structure, for example a wall, is divided into smaller units based on building techniques and materials. Then the unit is described on a form recording its position, relationships to other units, size, building technique and the size and type(s) of building materials. In addition, a verbal description is given as well as interpretation of the function of the unit as well as a possible date.

In the end, the units of the structure are synthesized to another form, where the building phases of the wall or floor are described and dated. Structures are used to describe rooms and their building history and in the end rooms are used to study the whole houses building history.