In September 2012 the Pompeii Aerial Survey Project conducted a successful aerial photogrammetric survey of the insula, utilising remote-controlled drones, in support of the EPUH and the Pistrina: les boulangeries de l’Italie romaine project of the École française de Rome (that has been conducting a study of the bakery in the southwest corner of the insula). The aim of the project was to test the application of aerial drone technology in the documentation and survey of built structures in an archaeological context (Pompeii) against traditional methods of architectural investigation. This was the first time that aerial drones had been successfully employed at Pompeii for aerial photography; indeed, previous aerial photography had traditionally used balloons! 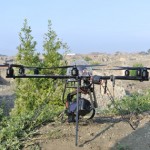 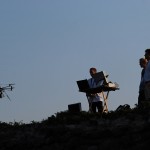 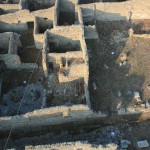 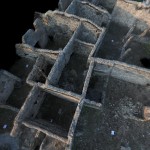 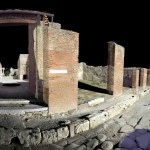 Our approach was twofold: first, to use the aerial drones to take geo-referenced HD geo-referenced digital photographs in order to develop a 3D photogrammetric point cloud model of the insula. Second, we also employed a laser scanner in order to provide a framework for the digital model but also to allow us to compare the merits of the two methodologies.

The drones and their pilots, who have great expertise and experience in flying them, were generously loaned to us by Landinspektørfirmaet LE34 (see acknowledgements below). The drones offer a previously unparalleled opportunity to remotely and quickly survey standing structures. The drone typically flies for 12-30 minutes at a time and can follow a pre-programmed set route or altitude; it will come back to you at the press of a button, while its flight can be followed by a small inbuilt camera. The attached camera can take HD photographs or films including 360 degree recordings. The drone has several on-board gyroscopes and GPS devices that allow it to maintain a safe and consistent position even in windy conditions! These features enable the drone to take geo-referenced HD photographs, which are accurate down to 0.01m. This is simply impossible from traditional balloon-based cameras or even other highly sophisticated aerial survey methods. Furthermore, the drone can take many hundreds of photographs in a single flight so our method also allows us to complete the photogrammetric survey far more rapidly than by a traditional hand-held method on the ground, which can be highly time-consuming and is often problematic given the importance of camera position in photographing high walls or features. However, it was necessary to supplement the drone photographs with a number taken with a hand held camera. This was necessary given the high number of very small spaces in the insula that were simply too small or narrow for the drone to adequately photograph.

For detailed specifications on the drones click here: LE34

The drone flights were conducted on the mornings of the 10th and 11th of September between 07:00 and 08:30, prior to the opening of the site to the public, although a number of test flights were made in and around Vico Equense (on the Sorrentine peninsula) in the days prior to this in order to check equipment as well as flying conditions. A total of six short flights were made at Pompeii, without incident. Flying conditions proved to be excellent at this time and, for several reasons, preferable to flying later in the day! In addition, we found that dew on the ground at this time meant that detail in the photographs was picked up that would probably have been lost had they been taken later in the day when the site is typically hot and dry. Over the course of these flights the drone took more than 4000 digital photographs of the insula. The majority were taken vertically although a large number were taken at a -45° angle to provide us with images of the wall faces for the modelling. The quality of the images taken also proved to be excellent. In this respect much is owed to the skill of the pilots who are able to operate the drone so precisely.

For the laser scan it was quickly determined that it would be difficult to survey the entire insula given the amount of time available and the number of small spaces. Therefore, in agreement with the EPUH project, it was firstly decided to conduct scans of the streets in order to provide a framework for the drone photographs but then also to survey the eastern area of the insula, which had, to date, not been studied in detail. This zone included an area which appears to have been ruinous in AD79 as well as the bakery complex (and several adjacent properties), occupying the southeast corner of the insula, which has been the subject of detailed survey our colleagues in the Pistrina: les boulangeries de l’Italie romaine project. It was also agreed that a partial scan should be made of the Casa di Marco Lucrezio. This house has already been the subject of a laser scan and photogrammetric survey conducted by EPUH project and EVTEK (Metropolia), Systems of Representation group of Media lab/TaiK, which was presented at the Domus Pompeiana exhibition of the Amos Anderson art museum in Helsinki in 2008. However, a new survey would therefore not only allow us the opportunity to assess our results against that conducted previously but also against the point cloud model derived from the drone photographs. The laser scanning was conducted over four days between the 7th and the 10th of September and a total of 66 numbered rooms were scanned.

With the fieldwork complete our focus is now turning to the modeling of the insula. So far we have completed a fully navigable 3D point cloud model of the insula, which has been compiled from several hundred photographs (see image and fly-through of one part below). This model will be fully integrated with, and will compliment, the survey already conducted by the EPUH project. This will not only constitute an additional digital data set of the standing remains but, we hope, will also be a virtual tool for the future study and analysis of the insula that can be conducted remotely. For example, this might include metrological or structural analyses or even the modelling of historic and archive images of the buildings in their original position and context.

Acknowledgements The Pompeii Aerial Survey Project is generously sponsored by Landinspektørfirmaet LE34 A/S (Copenaghen, Denmark) and our fieldwork was conducted with the kind permission of the Soprintendenza Speciali per i Beni Archeologici di Napoli e Pompei. We would also like to extend our thanks to Dr. Antero Tammisto, Dr. Eeva-Maria Viitanen and surveyor Maija Holappa of the EPUH project and Dr. Nicolas Monteix of the Pistrina: les boulangeries de l’Italie romaine project for their invaluable support and partnership.