The main emphasis of the project’s work is on documenting the standing structures, but in some carefully selected places small excavation was also conducted. Excavation is necessary to find out more about the earlier phases of the insula. First trenches were dug in 2003 in the atrium (room 2) and the corridor (room 17) leading from the atrium complex to the garden area. The work was continued in 2004 in the kitchen area in two rooms (12 and 14) and in the garden (room 18) with two trenches. In 2005, the garden trenches were extended and new ones were excavated in three areas of House IX 3,24 (rooms 26-27, 29 and 31). The last excavation year was 2006 and then the trenches were located in the alley north of the insula as well as in House IX 3,25. Altogether 12 small excavation areas were dug.

Excavation areas marked with dark colours in the ground plan of the city block.

The excavation techniques used comply with the currently most commonly used principles of single unit excavation. In a single unit excavation each different soil layer, cut or other structure is excavated and documented separately. Its relationships to other units are also recorded according to the principles of stratigraphical excavation. Each unit signifies some kind of activity in the area and it is possible to create a relative chronology for these activities based on their stratigraphical relationships. For example, when a ditch is dug through earlier layers, the ditch is the most recent activity. If the ditch is filled by soil layers these form another sequence of events. In the end these events can be presented in a Harris matrix and hopefully be dated absolutely with dated finds or other dating methods. 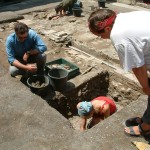 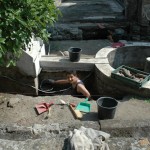 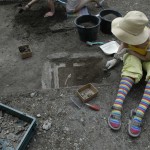 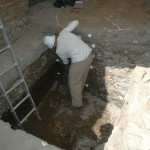