Jouni Tuominen and Eero Hyvönen from the Linked Data team of the SuALT project, Aalto University and HELDIG – Helsinki Centre for Digital Humanities, visited our colleagues in United Kingdom for a 10-day trip in June–July 2018. The main goal of the trip was to gather and evaluate the experiences of our British collaborator, Portable Antiquities Scheme (PAS) for implementing the forth-coming SuALT system in Finland, and to investigate possibilities of reusing and linking the data in British databases. The trip also included a visit to York university and the ARIADNE EU infrastructure project on archeological data.

Our trip started at the British Museum by visiting the head of PAS, Michael Lewis, and Ian Richardson, treasure registrar, who introduced us to the Treasury department and PAS and the national processes for dealing with finds. The PAS finds database was started in 1998 and it contains now some 1,361,000 objects within 870,000 records, being the largest of its kind in the world. The work covers England and Wales and is systematically funded and organized: the work is coordinated by the British Museum PAS office, and includes some 40 Field Liaison Officers (FLO) collaborating with the metal detectorists locally in different counties and collecting the find reports. 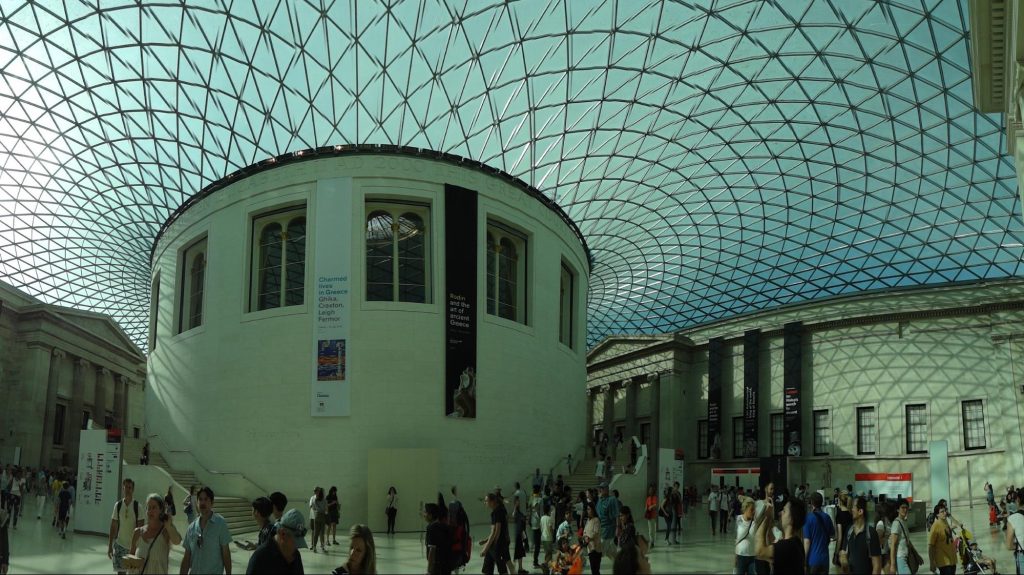 The impressive inner court of the British Museum

In UK, a find is considered a “treasure” if it is a metallic object with at least 10 percent gold or silver, and if it is at least 300 years old. The Treasure Act, passed in 1996, states that such a treasure has to be reported to the local Coroner within 14 days for evaluation. The state has the right to purchase the find, if it is considered worth it, and the value of the find is evaluated based on its market price by a national committee. In some case the price can be substantial. For example, the price for famous Staffordshire hoard now on display at the Birmingham Museum and Art Gallery was deemed worth over 2 million pounds. Typically, the price money is divided between the landowner and the finder. In PAS some 12,000 treasures have been reported thus far of which 3,800 were acquired by over 200 museums. Most common finds include medieval and post-medieval jewelleries, dress accessories, and belt buckles. 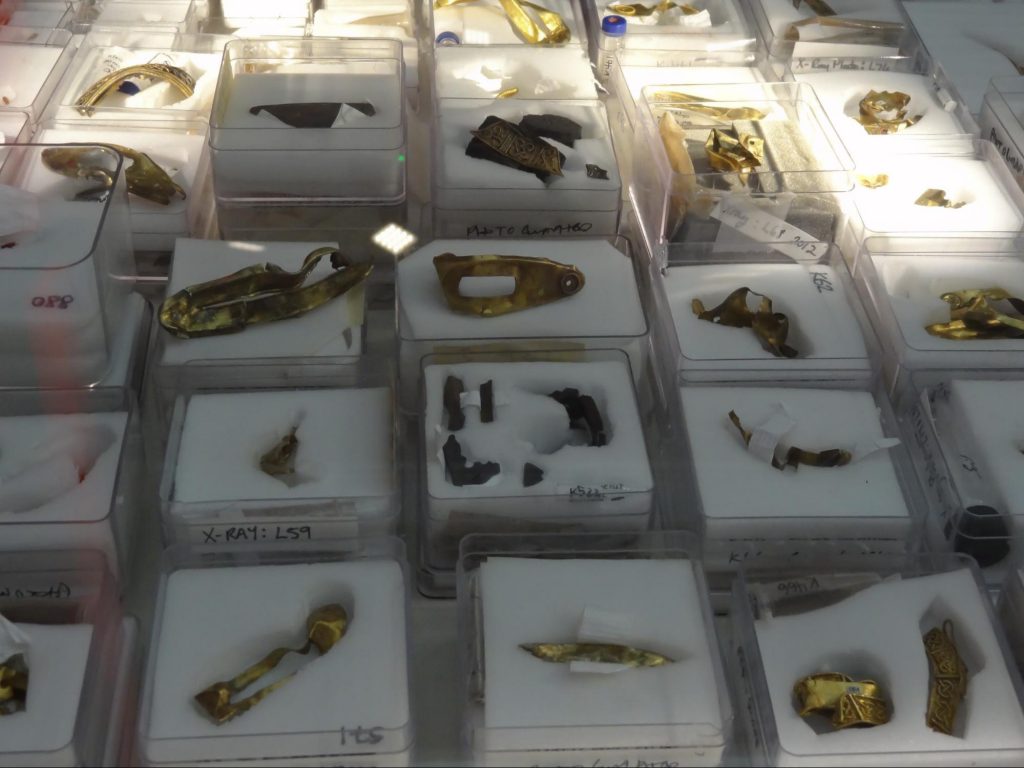 We were kindly invited to the semiannual PAS general meeting, which hosted most of the FLOs of PAS. We also had a chance to visit the FLO of the London area, Stuart Wyatt, at the Museum of London, and discuss the matter with Robert Webley, a former FLO. The meetings were a nice opportunity to get to know the experts who are the point of contact for the metal detectorists, learn how they work and record the finds, and advise the finders of best practices. Support like this would be needed in SuALT, too. As FLOs are at work as they are inputting data into PAS, they try to make the data compatible with Historic Environment Records (HER) held by County Councils, District Councils or Unitary Authorities. PAS and HER are two completely different systems, and the the data is exported from PAS into HER. As in Finland, find databases, museum collection databases, and heritage site databases are maintained in their own data silos although these resources are related content wise, which is not an optimal solution. This matter was discussed in a separate PAS/HER working group meeting in Birmingham. A goal of SuALT is mitigate this problem by data linking. 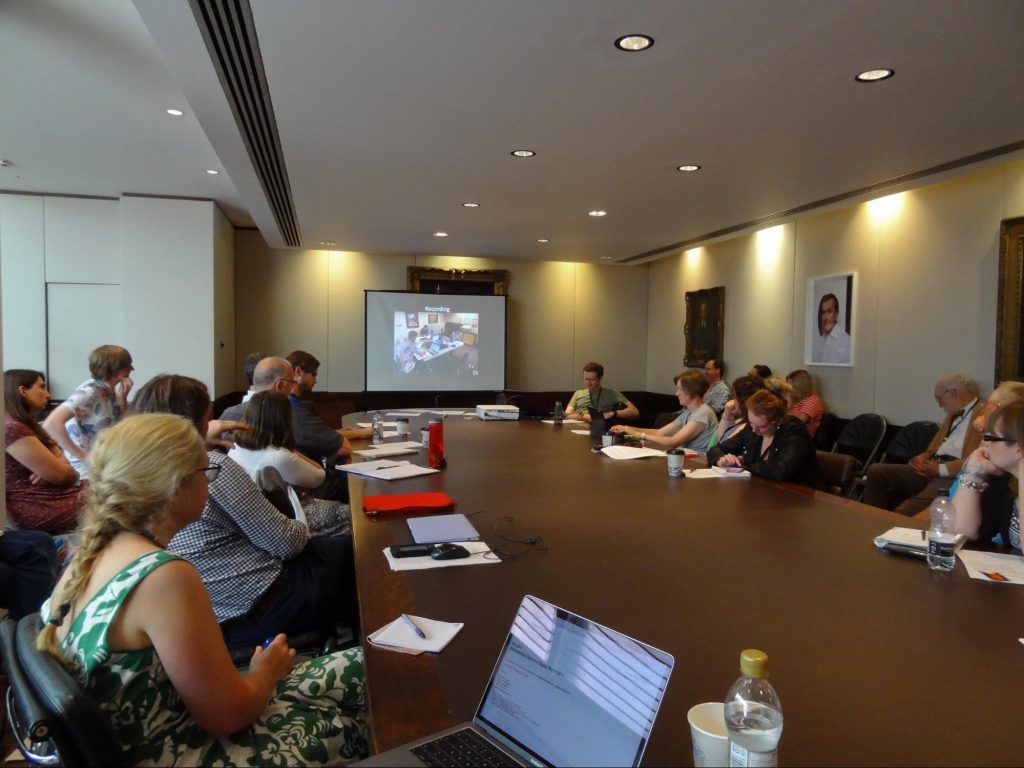 There was also a possibility to meet the technical developers maintaining the PAS system, i.e., Stephen Moon and Maxwell Keeble from the Information Systems department of the British Museum. We also got a welcome opportunity to meet and have a discussion with Michael Johnson of the London-based L&P Archaeology, a company that is developing DIME, the Danish metal detected find database.

An important use case to the SuALT system will be to use the data for research purposes. PAS data is already been researched in many ways, and we were pleased to have a meeting with Eljas Oksanen, who showed new research results and analyses he and Michael Lewis were working on.

During our stay we also visited Julian Richards and his colleagues at the University of York to discuss Archaeology Data Service (ADS) and the ARIADNE EU infrastructure project. In the same vein as SuALT, ARIADNE is based on Semantic Web technologies. SuALT, via University of Helsinki and HELDIG, is a member in a consortium that has received funding for developing the current ARIADNE infrastructure further (ARIADNEplus). 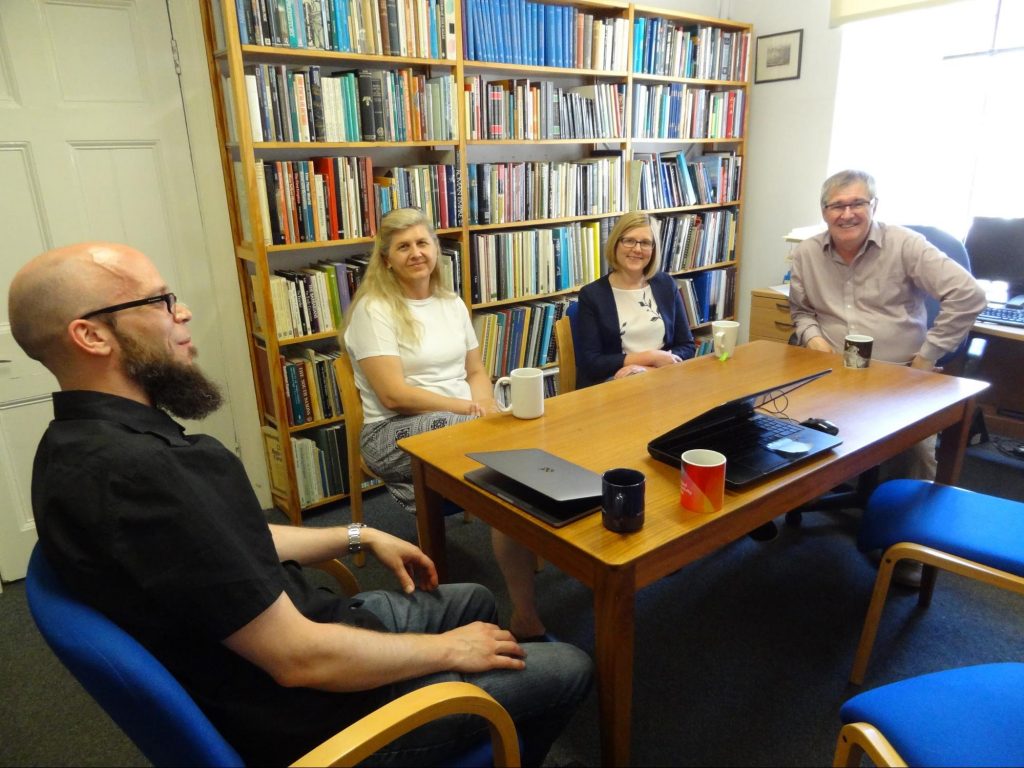 Meeting prof. Julian Richards (right), Katie Green, and Holly Wright at the University of York working on ARIADNE and ADS infrastructures for archeology

Thanks for staying tuned! 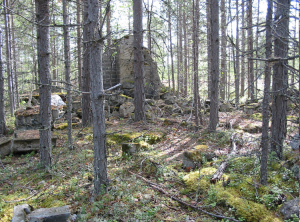 Next week, SuALT members Anna Wessman and Suzie Thomas from the University of Helsinki will be in Finnish Lapland. As well as giving presenting the project, in English and Finnish, at a special public evening in Siida museum on Tuesday 14th August they will be visiting locations such as Inari, Vuotso, Tankavaara and Kolari.

In particular we hope to interview archaeologists, curators and hobbyists on their opinions concerning how the citizen scientist initiative SuALT for recording archaeological objects found by the public should take shape. For example, what kind of material should be recorded? What other features should the database have? Who should be able to access the data it collects?

Contact us on sualt-project@helsinki.fi if you are in northern Lapland from 12-20 August and would be interested in talking to us. 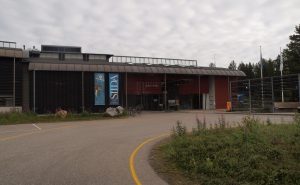