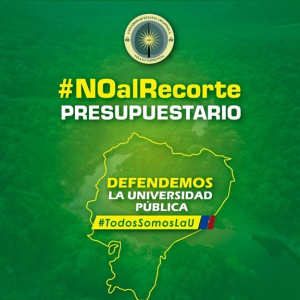 Covid-19 is expanding in Ecuador, but even more rapid has been the reaction by the government to restrict certain rights. No one dares to contest the lockdown, one of the strictest worldwide, that forbids the mobility of people from 2 pm until 5 am. However, some restrictions that are involving fundamental rights for the Ecuadorian people, i.e.: education for all, are causing discontent. The focus in this blog post is the right to higher education, especially for the less affluent groups of people who attend public universities. My knowledge of the Universidad Estatal Amazonica (UEA) – since my first visit in 2015, allows me to tell how much the administrative and academic staff of this University, located in the Pastaza province, is committed to serve their students to the best of their possibilities.

We should note the latest news of dramatic cuts in the public finance directed to 32 public universities: more than 98 Million U.S. Dollars that had to be distributed in May. The following table has been published by Nayra Chalán Quishpe, Vice President of the indigenous organization Ecuarunari, in her Facebook page, with the title “Ranking of infamy in higher education”. The table shows the catastrophic cuts that have hit all public universities of the country. According to Chalán Quishpe, these cuts will mostly affect the poorest students, who will not be able to continue their studies.

Last October 2019, the announcement of cuts in the public sector had caused a massive popular reaction, especially organized by the indigenous organizations and strongly supported by university students and staff. Thanks to the paro nacional (national strike), the International Monetary Fund (IMF) package that had required those cuts, to fill the gaps of debts earlier contracted by the state, had to be withdrawn. While the IMF conditionality is sadly famous for hitting especially the vulnerable groups, discussions were still in the air, that the government would have imposed another way to comply with the socially and economically disastrous IMF recipes. This sanitary crisis seems to have offered a favourable political environment to the government, but on 5 May 2020 students, teachers and workers of the public universities damaged by the cuts, together with activists of indigenous organizations, have organized a national strike in defense of the public education (#HuelgaEducativaEc ).

According to the academic authorities, these cuts will reduce the teaching staff that is employed on a temporary basis, and other expenses that were planned during this emergency time. Unfortunately, the start of the new semester would have needed even more funding to support distance education, given the fact that a large proportion of students do not own computers or have access to the internet.

Moreover, in the past weeks other disasters have hit the Amazonian region dramatically: a flooding of the Bobonaza river, causing losses of homes and food supplies for the the Kichwa communities of Pakayaku and Sarayaku, following heavy rains whose consequences in terms of the magnitude and frequency of floods are made extreme by the heavy logging in the forest; and on April 7, an oil spill of 15,000 barrels that affected the Coca and Napo rivers with tremendous contamination of a very extended region. The coincidence of disasters of this magnitude places the region in extreme need of sustainable transformation through its release from unbridled extractivism of natural resources and public investment in essential services for all.

In early May, UEA has done a survey and identified 35% of students without internet access, half of whom do not even possess any device to follow the online lectures. UEA had organized an emergency plan of purchase of devices and internet subscriptions for students who otherwise would not have the possibility to follow distance education; but the cut of 10% of the overall budget from the central government, is now challenging this possibility.

Moreover, the effect of the financial cuts that have been announced in May will be to reduce the temporary teaching staff, research and other activities directed to the communities. The university does not want to suspend any courses, as this would be directly detrimental for the currently enrolled students. The risk is high, because in the past and in many universities in the country, entire study programmes were suddenly obliged to close.

The right to education is a frontier struggle. It is not recognized as much as other struggles for the recognition of human rights. In the Pastaza province, only 3% of the indigenous peoples are enrolled in higher education. This governmental decision will be paid especially by students from the indigenous territories and other vulnerable groups.

As part of a group doing research in the Amazonian region, we had started our Academy project with a focus on decoloniality, intercultural education for the respect of ecocultural knowledges and the pluriverse. Now we are here, in the impossibility to reach our comrades, in their struggles for the very right to a more “just” education. The defense of public education is crucial, because if it collapses, many generations will suffer from the consequences.

In an interview with Ruth Arias, Rector of UEA, we have illustrated some of the problems lived by the Amazonian community, and the importance of the role of an engaged university in providing responses to this emergency.

Since the time of the interview, Covid-19 has spread especially in the municipality of Santa Clara, where UEA has its research centre of Amazonian conservation CIPCA.